British First World War propaganda posters. Designed by Arthur Wardle and published by the Parliamentary Recruitment Committee in 1915, this poster demonstrates that the recruitment drive during the First World War was not limited to British citizens. 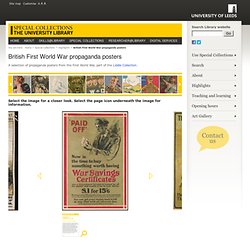 It attempts to foster a sense of unity between the dominions of the British Empire against a common enemy. At the outbreak of the First World War on 4 August 1914 the entirety of the British Empire was automatically deemed to be at war with Germany. However, self-governing dominions such as Canada, India, South Africa, Australia and New Zealand could choose whether or not to offer military assistance.

British WW1 Medals. Hundreds of thousands of men who served with the armed services, some women and some civilians received at least one WW1 medal. 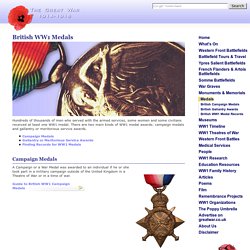 There are two main kinds of WW1 medal awards: campaign medals and gallantry or meritorious service awards. Campaign Medals A Campaign or a War Medal was awarded to an individual if he or she took part in a military campaign outside of the United Kingdom in a Theatre of War or in a time of war. Guide to British WW1 Campaign Medals Gallantry or Meritorious Service Awards Some individuals were awarded with a gallantry medal, an award for distinguished or meritorious service or were Mentioned in Despatches for showing special courage or devotion to duty in a particular action or circumstance. Doubtless there were many acts of courage and gallantry in the First World War which went unseen and for which no formal gallantry award was given. Guide to British WW1 Gallantry and Meritorious Service Awards Finding Records for WW1 Medals British Army WW1 Medal Records 1914-1920.

World War 1 Letters Home from the Western Front and Edwardian Era Letters, 1892 - 1920. - World War 1 and Edwardian Primary Source Letters Home. Conditions in Trenches - Dan Snow's Battle of the Somme. 3D Historical Virtual Tour. The only place in the UK where you can ride in a Lancaster Bomber - Lincolnshire Aviation Heritage Centre. Sutton Hoo. On a small hill above the river Deben in Suffolk is a strange-looking field, covered with grassy mounds of different sizes. For several hundred years what lay under them was a mystery. Then in 1938, an archaeologist called Basil Brown started digging under mounds 2, 3 and 4, where he found a few, mostly broken, Anglo-Saxon objects which had been buried alongside their owner's bodies.

Sadly, grave robbers had taken most of what was there. WIth a little more hope he started on the biggest mound, Mound 1. He did not know that the treasures under Mound 1 would turn out to be the most amazing set of Anglo-Saxon objects ever found. Resources for teachers Using this tour as a starting point for enquiries: Download Sutton Hoo teachers' notes (30 Kb) Download a student activity sheet (49 Kb) Print and do activities Download an Anglo-Saxon recipe for chicken stew (121 Kb) From Mound 1, Sutton Hoo, Suffolk Anglo-Saxon Height: 31.8 cm Width: 21.5 cm Gift of Mrs E.M.

Course: Interactive History. The Stone Age Archeological prehistory,is commonly divided chronologically into distinct periods, based on the development of tools from stone to bronze and iron, as well as changes in culture and climate that can be determined from the archeological record; but the boundaries of these periods are uncertain, and the changes between them gradual. 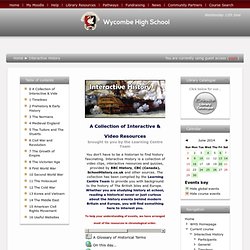 The earliest inhabitants of Britain for whom there is compelling evidence are bands of hunters living in Southern and Western England during the Hoxnian interglacial (about 380,000 to 400,000 BC). (Some very recent excavations of stone tools on the East Anglian coastline suggest human presence as early as 700,000 years ago). However, as temperatures again dropped, Britain was abandoned.

Although there are signs of human habitation during later interglacials, it was not until roughly 14,000 years ago that occupation became permanent. ‎www.english-heritage.org.uk/content/imported-docs/education/hl38traw.pdf. Learn History Facts. Lincoln photos, maps, books, memories - Francis Frith. Britain from Above. 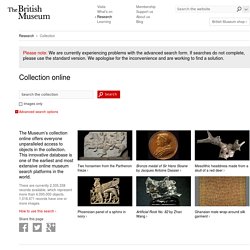 The database standardises these numbers in the form, for example: 1887,0708.2427 (year: comma: block of four numbers - usually representing a month and day: full-stop and final number). The final number can be of any length and may be followed by another full-stop and a sub-number. In some cases the same number is shared by two or more objects across departments. 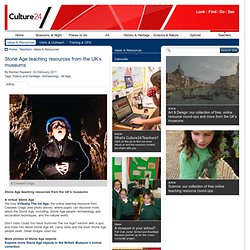 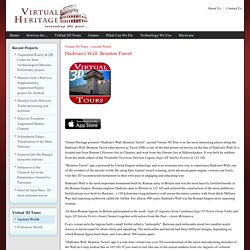 Brunton Turret", second Virtual 3D Tour over the most interesting places along the Hadrian's Wall. Brunton Turret (also known as Turret 26B) is one of the best preserved turrets on the line of Hadrian's Wall. It is located east from Roman Cilurnum fort in Chesters, and west from the Onnum fort in Haltonchesters. Rome Reborn 2.2: A Tour of Ancient Rome in 320 CE. Virtual Romans. Pudding Lane Productions, Crytek Off The Map.