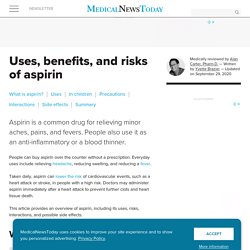 People also use it as an anti-inflammatory or a blood thinner. People can buy aspirin over the counter without a prescription. Everyday uses include relieving headache, reducing swelling, and reducing a fever. Taken daily, aspirin can lower the risk of cardiovascular events, such as a heart attack or stroke, in people with a high risk. Doctors may administer aspirin immediately after a heart attack to prevent further clots and heart tissue death. (326) How aspirin was discovered - Krishna Sudhir. What Exactly Makes the French Healthcare System So Good? - Frenchly. As Americans look to Canada for a model of a better healthcare system, CNBC takes a moment to examine why France, which currently has one of the top ranked healthcare systems in the world, might be worth emulating. 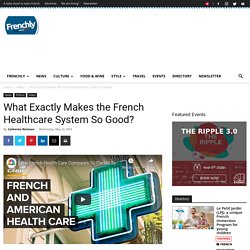 France has a longer life expectancy, a lower infant mortality rate, and a higher doctor-to-resident ratio than the United States. The focus on preventative care in France means that after being treated, patients are less likely to need to return for follow-up care (which also mean France spends less on healthcare — about half what the US does). Unlike in the US, the French system actually allows citizens more choice when it comes to treatment, because they don’t have the issue of insurance companies restricting things like which doctors a patient can seek treatment from.

Is the NHS the world's best healthcare system? Nothing inspires national pride quite like the National Health Service. 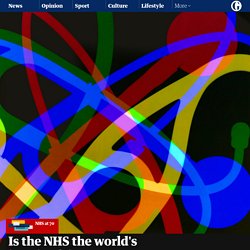 More than two-thirds of respondents in a recent poll said they considered the establishment of the institution, which turns 70 this week, to be Britain’s greatest achievement. But it is a very different thing now compared with its earliest incarnation, when health boards took control of 2,751 of Britain’s 3,000 hospitals, which had been run by charities or local authorities. It is not just the illnesses, facilities, technologies and demographics that are different, but the service’s very purpose. “When the NHS was founded it was intended to keep the workforce healthy, reduce premature death and allow a dignified end for everyone,” said Robert Freeman, a consultant orthopaedic surgeon. “There has been significant mission creep since and the NHS now has a much broader scope with a focus on prolonging life almost irrespective of quality.” How has the NHS changed in 70 years?

What has it got better at? … and worse at? Compare and Contrast Healthcare delivery in France and the UK. A Comparison between the French and British Health systems. Health By FranceInLondon 01/05/2015 Though the Brits have a much maligned health system, according to the Commonwealth Fund’s report in 2014 the NHS outperforms the majority of other western European health systems, including France. 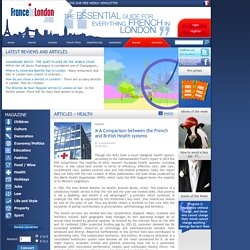 It was rated best overall in terms of efficiency, effective care, safe care, co-ordinated care, patient-centred care and cost-related problems. Sadly the report does not tally with the vast number of other publications, not least those produced by the World Health Organisation (WHO), which ranks the NHS leagues below the majority of its Western neighbours. Culture shock: How the British health service just doesn't really compare to France's. When you are on your own with a sick kid, things can become very stressful and it’s easy to panic (been there, done it). 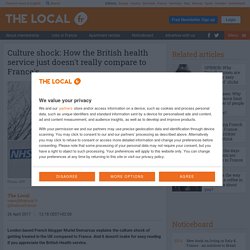 In France, your physician always listens to you. You’re always given a prescription, a routine examination, and taken seriously. Your symptoms will never be minimised, and if your doctor has the slightest doubt, you’ll be referred for a scan, an X-ray or a blood test. Needless to say, things are slightly different on the British side of the Channel. 11 things you need to know about French pharmacies. PUBLISHED: 15:01 05 June 2018 Sophie Gardner-Roberts French pharmacies provide much more than medicine Archant 1. 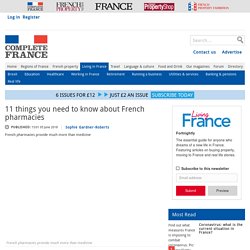 A cornerstone of France’s revered healthcare system, not to mention the beauty industry, the pharmacy is included in the basic amenities you will find in every medium-sized town and even in some relatively small villages. 2. 3. Don’t miss Visiting a French pharmacy 22 French words to help with a visit to the doctor in France Beauty and natural remedies in a French pharmacy 4. 5. 6. Don’t miss Accessing the health care system in France How will Brexit affect healthcare cover for British expats in France? Pharmacists are highly trained medical experts © diego cervo / Fotolia 7. 8. 9. Healthcare for expats in France Healthcare in France: What is a mutuelle? 10. Aspirin: low dose to prevent heart attacks and stroke. Aspirin screen experiment.

NHS ranked 'number one' health system. Image copyright JohnnyGreig The NHS has been ranked the number one health system in a comparison of 11 countries. 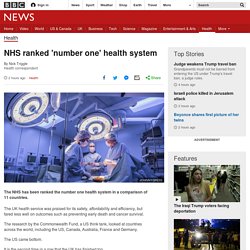 The UK health service was praised for its safety, affordability and efficiency, but fared less well on outcomes such as preventing early death and cancer survival.