□□□ Good morning folks... @SethAbramson. A Victory for White House Economic Nationalists. Sebastian Gorka Is Trump’s Baghdad Bob – Occidental Dissent. This is the spin coming out of the White House: “Sebastian Gorka, deputy assistant to the president, said on Friday morning that President Donald Trump’s populist supporters need not fear that the decision to strike a Syrian government target last week represents an embrace of neoconservatism. 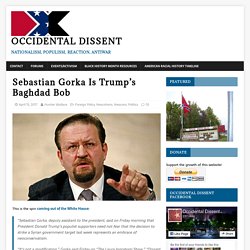 Occidental Dissent – Nationalism, Populism, Reaction, Antiwar. Operation Gotham Shield: U.S. Gov't To "Simulate Nuke Blast Over Manhattan" Something has aroused the interests of the American people... perhaps one too many coincidentally 'useful' event means government facilitators have jumped the shark? 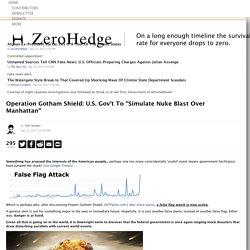 (via Google Trends) Penguin: Is Trump a Genius Trolling the Neo-Cons & Zionists? (YouTube, 19:10) « Public Intelligence Blog. IMPERAT - Christvs Sonnenrad. In Secret Court Hearing, Lawyer Objected to FBI Sifting Through NSA Data Like It Was Google. In her first appearance representing the American public before the top-secret Foreign Intelligence Surveillance Court in 2015, Amy Jeffress argued that the FBI is violating the Fourth Amendment by giving agents “virtually unrestricted” access to data from one of the NSA’s largest surveillance programs, which includes an untold amount of communications involving innocent Americans. 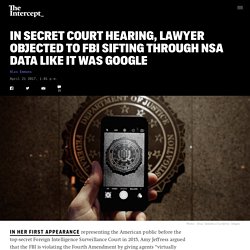 The NSA harvests data from major Internet companies like Facebook, Google and Apple without a warrant, because it is ostensibly “targeting” only foreigners. But the surveillance program sweeps up a large number of Americans’ communications as well. "Everything's Out" - San Francisco Blackout Shuts Down BART, Traffic Lights, Business Across Downtown. A massive power outage in San Francisco on Friday morning caused a blackout in neighborhoods across the city, from the Financial District to the Presidio, forcing the closure of businesses, a federal courthouse and a BART station, officials said. 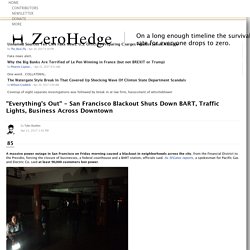 As SFGates reports, a spokesman for Pacific Gas and Electric Co. said at least 90,000 customers lost power. BART’s Montgomery Station was closed due to the outage, which struck after 9 a.m. BART rains were running through Montgomery Station without stopping. Cable cars were also impacted and shuttles were put in place to provide service, according to the Municipal Transportation Agency. Trump Administration Begins Quiet Preparations For Government Shutdown. Even as Donald Trump is desperate to show to the US population, and especially his voter base, some actual achievement before his first 100 days run out next weekend, prompting him to tell AP that he will unveil a "tremendous" tax ut plan next week (recall he did the same in February), the Trump administration is quietly preparing for the possibility of a government shutdown, even though the president and his staff believe one is unlikely to occur. 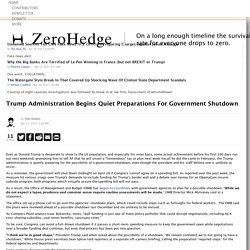 As a reminder, the government will shut down midnight on April 28 if Congress cannot agree on a spending bill. As reported over the past week, the measure hit various snags over Trump's demands to include funding for Trump’s border wall and a debate over money for an ObamaCare insurer subsidy program, both programs which virtually assure the spending bill will not pass. Why "Nothing Matters": Central Banks Have Bought A Record $1 Trillion In Assets In 2017. A quick, if familiar, observation to start the day courtesy of Bank of America which in the latest overnight note from Michael Hartnett notes that central banks (ECB & BoJ) have bought $1 trillion of financial assets just in the first four months of 2017, which amounts to $3.6 trillion annualized, "the largest CB buying on record. 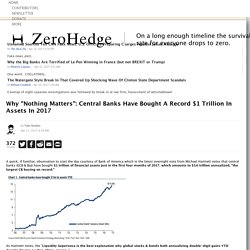 " As Hartnett notes, the "Liquidity Supernova is the best explanation why global stocks & bonds both annualizing double-digit gains YTD despite Trump, Le Pen, China, macro... " And for those who have still not seen it, here is the only chart that matters. Finally, as a reminder also from Hartnett, any time the central bank punch bowl is taken away, an unpleasant "financial event" inevitably happens. Pizzagate Pedogate Dutch Whistleblower Real Big Money Revelations by an Insider. HAARP, The Hum, and the Clinton Foundation. The Ongoing Revolution in the US. Election 2016: The Battle of the Statisticians... Short-term update: top Trump advisor shares our latest analysis. 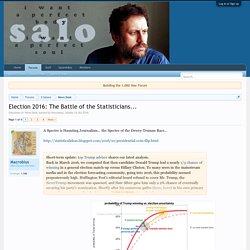 Back in March 2016, we computed that then-candidate Donald Trump had a nearly 1/3 chance of winning in a general election match-up versus Hillary Clinton. To many seers in the mainstream media and in the election forecasting community, going into 2016, this probability seemed preposterously high. Huffington Post’s editorial board refused to cover Mr. Extensive Sourcing of Anti-Trump Funding by QANGOs. However, this is just the mainstream media hiding and distorting facts. 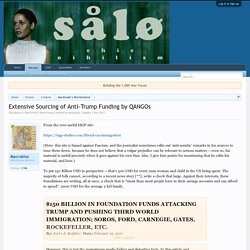 In this article and oversight we're dealing with supposedly "independent" and "grassroots" activist groups which supposedly have no connection whatsoever with the ruling liberal establishment, including the mainstream media. Except... they have. Caesar is not going to restore the Republic. The Consolidated Trump Impeachment Thread. Are Corporations Prepping? The Case for Reverse Malthusianism. The second characteristic is that population growth is positively related to living standards. 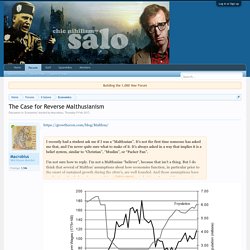 David Harvey's Critique of Capitalism and Neo-Liberalism. The Algorithms that Rule the World. An Investigative Journalist's Guide to Geolocating Data. Salo Forum - Chic Nihilism. Vault7: Splinter it into a Thousand Pieces and Scatter it into the Winds. I'm going to put this under research, because after the news story dies down, there will be a lot of research here. tl;dr Your TV is listening to you LOL Obama... 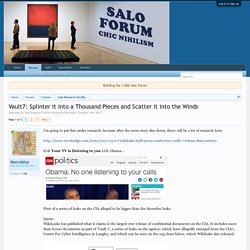 First of a series of leaks on the CIA alleged to be bigger than the Snowden leaks. Quote: WikiLeaks has published what it claims is the largest ever release of confidential documents on the CIA. Data Fusion Center of the White Race. For Neo-Nazis, Trump Is Now A ‘Jewish Pawn’ – The Forward. Before Donald Trump began his political career, neo-Nazis and white nationalists were suspicious of the business tycoon from New York, some accusing him of associating too closely with Jews, maybe even being a “secret Jew” himself. If Trump Fired Bannon, Would He Seek Revenge?

When Steve Bannon vacated a home in Florida in 2015, his landlord complained that an entire Jacuzzi had apparently been coated in acid. After conservative media star Dana Loesch left Bannon’s employ at Breitbart News in 2012, she filed a suit against the website, alleging a plot to “sabotage” her career. CIA WikiLeaks traitor manhunt underway. Last Updated Apr 20, 2017 1:38 PM EDT WASHINGTON -- CBS News has learned that a manhunt is underway for a traitor inside the Central Intelligence Agency.

The CIA and FBI are conducting a joint investigation into one of the worst security breaches in CIA history, which exposed thousands of top-secret documents that described CIA tools used to penetrate smartphones, smart televisions and computer systems. CIA and FBI seek employee who leaked top secret documents Sources familiar with the investigation say it is looking for an insider -- either a CIA employee or contractor -- who had physical access to the material.

WikiLeaks’s CIA Leaks Hurt U.S. Alliances. Intelligence Operational Rule No. 1: Don’t get caught. Intelligence Operational Rule No. 2: In the wilderness of mirrors, a source may have many faces. On Tuesday, WikiLeaks released thousands of top-secret CIA documents outlining the penetration of encrypted-communication platforms. WikiLeaks claims these documents were acquired by an American citizen concerned about the abuse of civil liberties by U.S. intelligence agencies. While we will have to wait for more evidence to know for sure, the circumstantial evidence already points to Intelligence Operational Rule No. 2, i.e., Russian involvement. The Real Ed Snowden Is a Patsy, a Fraud and a Kremlin-Controlled Pawn. Can’t Anybody Here Play This Game? Did somebody just try to buy the British government? Secretive Knights Templar Make Astounding Bid To Save World. World's Largest English Language News Service with Over 500 Articles Updated Daily. The Story of the Law.

Chapter 1 The Physical Basis of Law↩ Almost everyone of ordinary information understands very well what is meant by the word “law,” but even the most learned jurists, when called upon to give an accurate definition of the term, find themselves at a loss. No jurist has yet achieved a definition of law that does not require the use of the idea of law, either implied or expressed, as a part of the definition. All will agree that the word in its meaning implies a set both of general principles and of particular rules. Upon law what we call rights are founded, and by it wrongs are forbidden; but if we ask the meaning of the terms “rights” and “wrongs” we simply move around a circle by saying that rights are what are legally recognized as rights and wrongs are what the law defines as wrongs. It is necessary at the outset to lay stress upon the dominating fact of men having always lived in social organizations.

Why I Think Trump & Putin Are Trolling The World Right Now. Santa? Is that you? - The Phora. Linux Desktop Share Doubles... Because ChromeOS - The Phora. The Miracle of Holy Fire (Holy Light) 2017 - Footage from Jerusalem. Revealed: The 'very, very important' people coming to NZ. British spies were first to spot Trump team's links with Russia.

Confirmed: John Brennan Colluded With Foreign Spies to Defeat Trump. In Which States Do Most Millennials Live With Their Parents? North Korea Is a Large Opium Producer Just Like Afghanistan — But That’s None of Your Business. Obama Tries to Influence French Elections, The Exact Accusation Hurled By Democrats Against Putin… Oroville dam problems - Page 9 - The Phora. The Chieftains - The Morning Dew. Smart TV Hack Proof of Concept - The Phora. For The First Time In Its History, Subway Shutters Hundreds Of US Stores. U.S. Preparing Charges To Arrest Julian Assange. OMB Director Mulvaney Budgets "Leveraged" $200 Billion For Trump Infrastructure Plan. The Trump Daily.