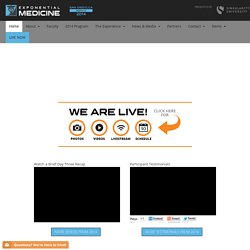 See our Program Agenda and 2014 Faculty. Follow Us. Singularity. Transhuman Organs, Limbs and Other Body Parts. Human enhancement. An electrically powered exoskeleton suit in development as of 2010 by Tsukuba University of Japan. 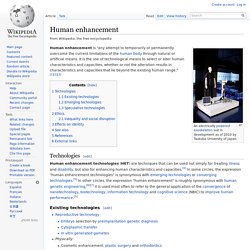 Welcome to Life: the singularity, ruined by lawyers. Bionic Vision: “Sight” Short Movie Explores the Coming Future of Augmented Reality. A picture of an eye with a google glasses style contact lens A pair of graduate students at the Bezaleal Academy of Arts, in Jeruselem, have created a fascinating short video that experiments with concepts of life in a world full of Augmented Reality technology. 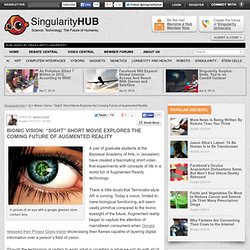 There is little doubt that Terminator-style AR is coming. Today’s vision, limited to mere biological functioning, will seem vastly primitive compared to the bionic eyesight of the future. Exponential Growth. Use Of Technology. Vernor Vinge on the Singularity. Vernor Vinge Department of Mathematical Sciences San Diego State University (c) 1993 by Vernor Vinge (This article may be reproduced for noncommercial purposes if it is copied in its entirety, including this notice.) 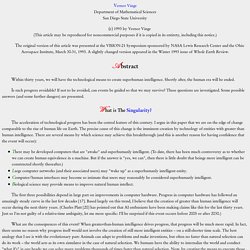 The original version of this article was presented at the VISION-21 Symposium sponsored by NASA Lewis Research Center and the Ohio Aerospace Institute, March 30-31, 1993. A slightly changed version appeared in the Winter 1993 issue of Whole Earth Review. Within thirty years, we will have the technological means to create superhuman intelligence. Shortly after, the human era will be ended. Dr. Michio Kaku. Futurology: The tricky art of knowing what will happen next. 23 December 2010Last updated at 02:38 By Finlo Rohrer BBC News Magazine Cheap air travel was among the predictions (illustration from Geoffrey Hoyle's book) A 1972 book which predicts what life would be like in 2010 has been reprinted after attracting a cult following, but how hard is it to tell the future? 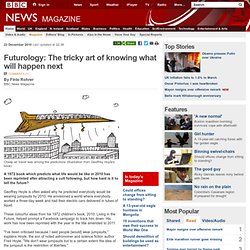 Geoffrey Hoyle is often asked why he predicted everybody would be wearing jumpsuits by 2010. He envisioned a world where everybody worked a three-day week and had their electric cars delivered in tubes of liquid. These colourful ideas from his 1972 children's book, 2010: Living in the Future, helped prompt a Facebook campaign to track him down. "I've been criticised because I said people [would] wear jumpsuits," explains Hoyle, the son of noted astronomer and science fiction author Fred Hoyle. Hugh Herr: The new bionics that let us run, climb and dance. Transhumanismus. Michio Kaku. Eliezer S. Yudkowsky. Cryonics: Alcor Life Extension Foundation. Accelerating Future » Future Economy? Danila Medvedev , founder of the Russian Transhumanist Association and pioneer of cryonics in Russia, thinks that our future economy will look like the following: He writes: 1.

Development of virtual reality means that “white-collar” work will be moved to virtual workplaces and much of service and operator work will be done using telepresence. 2. Advanced robotics will gradually replace humans in physical labor (first using some telepresence, but later moving to mostly autonomous systems). 3. Artificial intelligence will replace humans in service, operator, manual (through robotics) and creative jobs. 4. Will this come true? But I’m not sure why AI, robotics, and nanotech are mutually exclusive… Singularity Summit. Human enhancement. Intelligence amplification. Intelligence amplification (IA) (also referred to as cognitive augmentation and machine augmented intelligence) refers to the effective use of information technology in augmenting human intelligence. 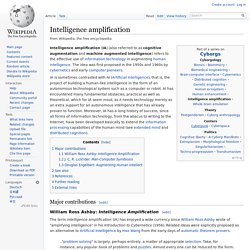 The idea was first proposed in the 1950s and 1960s by cybernetics and early computer pioneers. IA is sometimes contrasted with AI (Artificial Intelligence), that is, the project of building a human-like intelligence in the form of an autonomous technological system such as a computer or robot. AI has encountered many fundamental obstacles, practical as well as theoretical, which for IA seem moot, as it needs technology merely as an extra support for an autonomous intelligence that has already proven to function. Moreover, IA has a long history of success, since all forms of information technology, from the abacus to writing to the Internet, have been developed basically to extend the information processing capabilities of the human mind (see extended mind and distributed cognition). ..