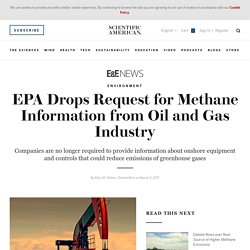 EPA Administrator Scott Pruitt has swiftly complied with a request from GOP leaders in oil-and-gas-producing states to scrap an Obama-era request for industry information about reducing greenhouse gas emissions. The agency yesterday withdrew a formal survey of oil and gas companies that required them to provide information about onshore equipment and controls that could reduce emissions of greenhouse gases, including methane. Billions of litres of raw sewage, untreated waste water pouring into Canadian waterways. More than 205 billion litres of raw sewage and untreated waste water spewed into Canada's rivers and oceans last year, CBC News has learned, despite federal regulations introduced in 2012 to try to solve the problem. 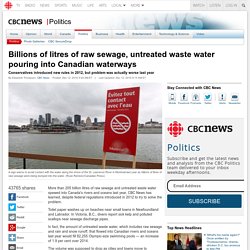 Toilet paper washes up on beaches near small towns in Newfoundland and Labrador. In Victoria, B.C., divers report sick kelp and polluted scallops near sewage discharge pipes. In fact, the amount of untreated waste water, which includes raw sewage and rain and snow runoff, that flowed into Canadian rivers and oceans last year would fill 82,255 Olympic-size swimming pools — an increase of 1.9 per cent over 2014. The volume was supposed to drop as cities and towns move to comply with the standards the Conservative government adopted four years ago. Planetizen: The independent resource for people passionate about planning and related fields. Why Congress just killed a rule restricting coal companies from dumping waste in streams. ‪Life without oil and petroleum... - Oil Sands Action. Explicit cookie consent.

RENEWABLE energy is often generated in places far from the cities and industrial centres that consume it. 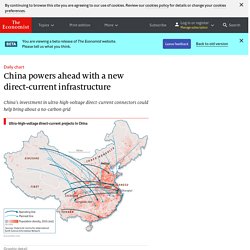 To boost renewables and drive down carbon-dioxide emissions, a way must be found to send energy over long distances efficiently. The technology already exists. Most electricity is transmitted today as alternating current (AC). Planetizen: The independent resource for people passionate about planning and related fields. Emissions from Oil Sands Mining. Using data from a NASA satellite, researchers have found that the emission of pollutants from oil sands mining operations in Canada’s Alberta Province are comparable to the emissions from a large power plant or a moderately sized city. 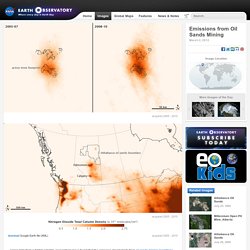 The emissions from the energy-intensive mining effort come from excavators, dump trucks, extraction pumps and wells, and refining facilities where the oil sands are processed. Oil sands (also known as tar sands) are actually bitumen, a very thick and heavy form of oil that coats grains of sand and other minerals. Methane levels in the atmosphere are now rising at their fastest pace in decades. Global Thinkers 2016. The Gulf of Mexico Is Being Destroyed by Thousands of Invisible Oil Spills. Hurricane Ivan would not die. 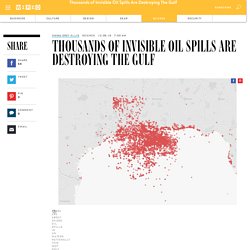 The US keeps shutting down nuclear power plants and replacing them with coal or gas. A Massive Oil Pipeline Is Being Built Across the Great Plains. David Archambault II, the tribal chairman of the Standing Rock Sioux, calls it the “black snake”: a 1,172 mile-long pipeline slated to carry crude oil fracked out of the Bakken formation in North Dakota to southern Illinois, where it will be routed to refineries on the Gulf Coast. 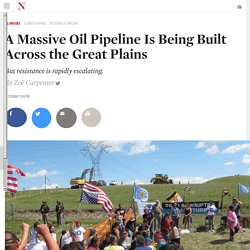 Once the pipeline is operational, half a million gallons will flow each day along a route that crosses through farmland and wildlife habitat and beneath several major rivers, including the Missouri. The Porter Ranch Methane Leak Was the Worst in US History. California gas leak spewed massive amounts of methane. The months-long natural gas leak from a well in California's San Fernando Valley released 97,100 metric tons of methane and 7,300 metric tons of ethane into the air above Los Angeles, researchers estimate February 25 in Science. 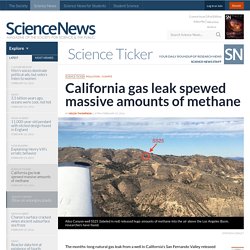 For the first six weeks of the leak, the well spewed at most 59 metric tons of methane and 4.4 metric tons of ethane per hour — twice the normal emission rate of the entire Los Angeles Basin, the researchers say. Cheap Gas Takes Toll on Amtrak Ridership. As gas prices drop, we know that fuel efficiency of the new vehicles purchased decreases, while vehicle-miles-traveled and traffic deaths increase. 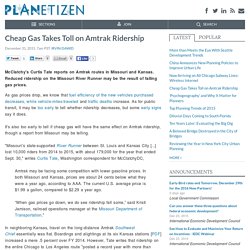 As for public transit, it may be too early to tell whether ridership decreases, but some early signs say it does. It's also too early to tell if cheap gas will have the same effect on Amtrak ridership, though a report from Missouri may be telling. "Missouri’s state-supported River Runner between St. Louis and Kansas City [...] lost 10,000 riders from 2014 to 2015, with about 179,000 for the year that ended Sept. 30," writes Curtis Tate, Washington correspondent for McClatchyDC, Massive California Methane Leak Made Visible. A ruptured gas well is spewing 62 million cubic feet of invisible methane into the San Fernando Valley each day -- and, for the first time, the massive leak has been made visible. 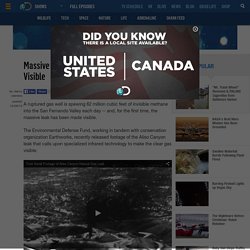 The Environmental Defense Fund, working in tandem with conservation organization Earthworks, recently released footage of the Aliso Canyon leak that calls upon specialized infrared technology to make the clear gas visible: Since late October, an estimated 73,000 tons of methane has escaped the well. The highly flammable gas is 20 times more potent by weight than carbon dioxide, and contributes significantly to the greenhouse gas effect. Related: How Your Trash Impacts Climate Change "What you can't see is easy to ignore. Calif. declares emergency after oil spill fouls sea and beaches near Santa Barbara. A man tries to rescue an oil soaked bird (Lara Cooper/Noozhawk.com via Reuters) California Gov. 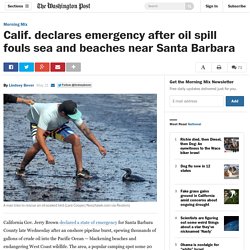