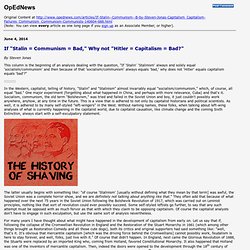 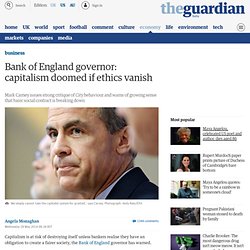 Mark Carney said bankers had operated a "heads-I-win-tails-you-lose" system. He questioned whether traders met ethical standards and said that those who failed to meet high professional standards should face ostracism. Speaking at a City conference, the Bank's governor warned that there was a growing sense that the basic social contract at the heart of capitalism was breaking down amid rising inequality. "We simply cannot take the capitalist system, which produces such plenty and so many solutions, for granted. Prosperity requires not just investment in economic capital, but investment in social capital. " May Day 2014 and the breakdown of world capitalism. By Nick Beams 6 May 2014 Below is the text of the speech given by Nick Beams, national secretary of the Socialist Equality Party of Australia, to the International Online May Day Rally hosted by the International Committee of the Fourth International and the World Socialist Web Site on Sunday, May 4. 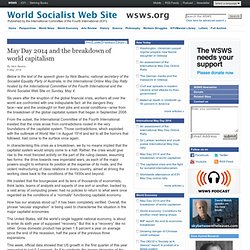 Page 2 of Article: Four Ways to Evolve Beyond Capitalism. Disaster Capitalism(image by BloGlobal) In my previous article, I explained how all of the economic problems we currently face are natural results of capitalism. 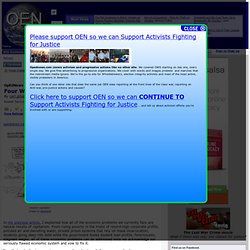 From rising poverty in the midst of record-high corporate profits, polluted air and dwindling water, private prison systems that rely on mass incarceration, students going deep into debt while the government books student loan profits, foreclosures, stagnant wages, all of these economic problems can be addressed once we acknowledge our seriously flawed economic system and vow to fix it. Printing: Let's Make Capitalism a Dirty Word.

March 6, 2014 By carl gibson 'Under the capitalist system, the majority of life for today's average American before retirement is spent pursuing profits that will never be shared with them.' Carl Gibson, RSN "Americans have literally becomes slaves to capitalism. 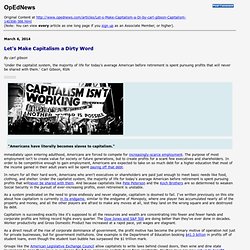 " mmediately upon entering adulthood, Americans are forced to compete for increasingly-scarce employment. In return for all their hard work, Americans who aren't executives or shareholders are paid just enough to meet basic needs like food, clothing, and shelter. As a system predicated on the need to grow endlessly and never stagnate, capitalism is doomed to fail. Capitalism is succeeding exactly like it's supposed to all the resources and wealth are concentrating into fewer and fewer hands and corporate profits are hitting record highs every quarter. Page 2 of Article: Global Capitalism Has Written Off The Human Race. Source: Paul Craig Roberts (image by Illustration by LeonKuhn) Economic theory teaches that free price and profit movements ensure that capitalism produces the greatest welfare for the greatest number. 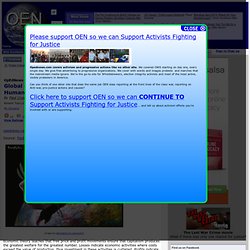 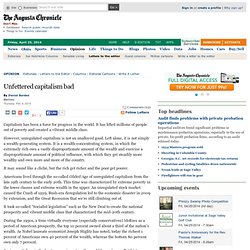 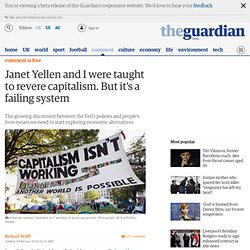 The professor who shaped the macroeconomics we learned was James Tobin. Rock-Star Pope at war with GOP’s Ayn Rand Capitalism - Paul B. Farrell. By Paul B. 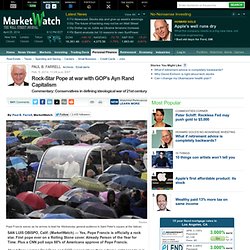 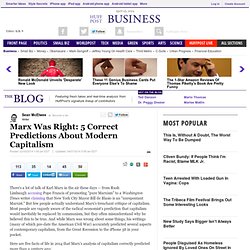 " Printing: Safe Passage..., with a Big IF: A Review of Paul Craig Roberts' THE FAILURE OF LAISSEZ FAIRE CAPITALISM. February 1, 2014 By Gary Corseri Economics may be the "gloomy science" for most of its glum practitioners, but in Roberts' humanist hands, it's a scalpel to carve order from disorder--to framework the challenges of our precarious, modern, globalized world; to alert us to the dangers we face now, and the even graver threats ahead if we cannot restore real democracy, moral sensibility, and rational balance.

Here's a book that presents its theses nimbly, deftly, consummately. Roberts can be as "elegant" as a mathematical proof, and as down-to-earth, colloquial, no-B.S. as a man who has walked the windy labyrinths of power, observing closely, "testing axioms on the pulses," and finding his own way to what works--and to Truth. The Curse of Capitalism. Government is government and business is business and the two are very different from each other. A business exists solely to earn profits for its owners. On the other hand, a prime function of government is to keep the playing field level between citizens so that no one person or groups of people can take unfair advantage of others. This being the case, it should be clear that the goals of government and corporations are at cross purposes with each other. A business earns profits by exploiting its environment and seeking advantage in the market place.

Is Capitalism Heading In Wrong Direction? Nowadays, many people are losing their faith and have started questioning the fair operation of capitalism. One of the compelling reasons for such distrust is too much greed and misuse of self-interest that was supposed to be the building block of capitalism and a genuine drive to business activity. Why Capitalism Can’t Fix Our Most Urgent Problems. Can capitalism solve the problems of global warming and growing inequality? It seems to me this is like discussing the issue of inappropriate hypersexual imagery bombarding 11-year olds and then asking: Can Justin Bieber or Lady Gaga fix the problem?

Real capitalism, not the theoretical version taught in school, is a system of minority rule in which a few people profit at the expense of others. Real capitalists are always trying to cut their costs and increase their profits, which leads to unemployment, falling wages, rising economic disparity and not paying for the environmental damage they cause. Private ownership of what are social means of livelihood produces incentives for capitalists to pass along the real costs of industry to communities, workers, future generations and other species. Private ownership makes growing inequality inevitable. Capitalism as a Secularized Religion. The heated public discussion of the pope’s capitalism criticism reveals this is ultimately a conflict about religion. Capitalism as a secularized religion. Part 1. For capitalism, the enemy is us. Roger’s Rules » The Evils of Capitalism.

“It ain’t so much the things we don’t know that get us into trouble as the things we do know that ain’t so.” – Mark Twain (attributed) What’s the one thing everyone knows about capitalism? Why, that it started out as a mean, nasty tool of greedy industrialists. The Political Economy of Predatory Capitalism. Preventing disaster capitalism. Distinguishing capitalism from market economy, leading cardinal defends Pope’s economic comments. Income inequality: Does wider gap between rich and poor threaten capitalism? Income inequality seems an unlikely focus for Bill Gross, the most powerful bond manager of his generation and co-head of a $2 trillion investment management firm. Skip to next paragraph Subscribe Today to the Monitor Click Here for your FREE 30 DAYS ofThe Christian Science MonitorWeekly Digital Edition.