Can Certain Drugs Improve Driving Ability? We are constantly being told that drugs can severely compromise our ability to drive, causing lapses of attention, disorientation, a failure to accurately assess risks and even aggressive driving. 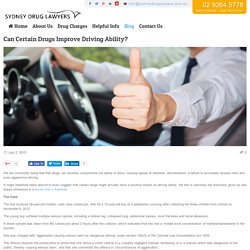 It might therefore seem absurd to even suggest that certain drugs might actually have a positive impact on driving ability. Yet this is precisely the testimony given by two expert witnesses in a recent trial in Adelaide. The Case The trial involved 39-year-old mother, Leah Jane Lenarczyk, who hit a 12-year-old boy at a pedestrian crossing after collecting her three children from school on November 8, 2012. The young boy suffered multiple serious injuries, including a broken leg, collapsed lung, abdominal injuries, skull fractures and facial abrasions.

The Greens will cop it for their new drugs policy. But they're spot on. It's about bloody time. 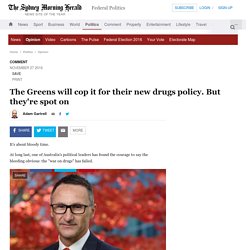 At long last, one of Australia's political leaders has found the courage to say the bleeding obvious: the "war on drugs" has failed. It's been nearly half a century since US President Richard Nixon popularised the term and just what has been achieved in that time? This war has filled our prisons with people who more often than not just need help but are instead locked up with hardened criminals. It has ruined lives, families and careers while turning scumbag dealers into millionaires. It has wasted countless police hours, time that could have been much better spent going after those scumbags, not to mention murderers and rapists and child molesters. And it has killed people. Greens in radical new drug legalisation push. The Greens have made a radical change to their drugs policy which leader Richard Di Natale hopes will reignite the decriminalisation debate and pave the way for the legalisation of recreational drugs like cannabis. 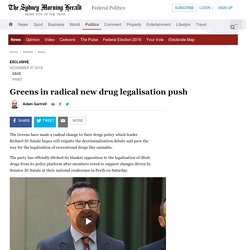 The party has officially ditched its blanket opposition to the legalisation of illicit drugs from its policy platform after members voted to support changes driven by Senator Di Natale at their national conference in Perth on Saturday. This is a modal window. This modal can be closed by pressing the Escape key or activating the close button. Captions Settings Dialog Beginning of dialog window.

Why Australia's mobile drug testing regime is biased and unfair. Police in NSW and Victoria are planning to give random drug tests to over 300,000 drivers in the next year using a system that critics say is “inherently flawed”. 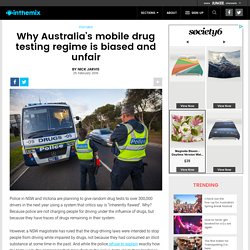 Why? Because police are not charging people for driving under the influence of drugs, but because they have traces of drugs remaining in their system. However, a NSW magistrate has ruled that the drug-driving laws were intended to stop people from driving while impaired by drugs, not because they had consumed an illicit substance at some time in the past.

And while the police refuse to explain exactly how the tests work, the companies that manufacture the saliva-tests claim their machines are perfectly capable of detecting how impaired someone is. Drug-driving law fails justice test – Echonetdaily. These are the men who brought you the drug-driving law: in suits from left, NSW premier Mike Baird, NSW National Party leader Troy Grant and roads minister Duncan Gay at a related press conference at Dubbo on March 15, 2015. 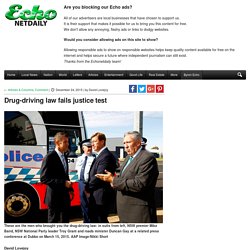 AAP Image/Nikki Short David Lovejoy We are a highly regulated country. If a company here tried to launch a product that was defective in its operation, based on dubious science and caused severe damage to the lives of the people it was supposed to serve there would be swift action, and probably severe penalties. Unless of course it were a government product. Meet the Mobile Drug Test. Drug driving in NSW. SPA celebrates 60 years with national roadshow - Mediaweek. 11 Shares Share Tweet Email Screen Producers Australia (SPA) is to celebrate its 60th anniversary with a national roadshow, starting from Melbourne on 2 August and culminating in the Screen Producers Australia Awards at the industry’s Screen Forever conference on 17 November 2016. 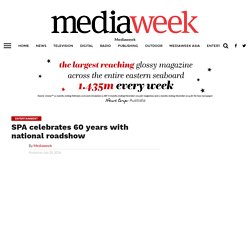 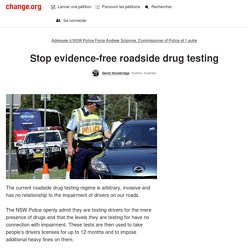 The NSW Police openly admit they are testing drivers for the mere presence of drugs and that the levels they are testing for have no connection with impairment. These tests are then used to take people’s drivers licenses for up to 12 months and to impose additional heavy fines on them. The police roadside drug testing is limited to only three illegal drugs - cannabis, MDMA and amphetamines. Meanwhile prescription drugs that seriously impair drivers and are commonly found to contribute to traffic accidents, including benzodiazepines and prescription pain killers, are never tested for. Why Australia's mobile drug testing regime is biased and unfair. 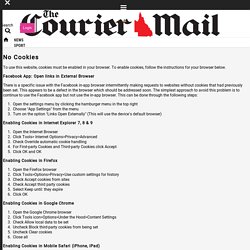 To enable cookies, follow the instructions for your browser below. Facebook App: Open links in External Browser There is a specific issue with the Facebook in-app browser intermittently making requests to websites without cookies that had previously been set. Judge launches scathing attack on media's coverage of Harriet Wran. A judge has launched an extraordinary tirade on media coverage of Harriet Wran saying intense focus, including on her family background and appearance, was disproportionate to the crime she committed. 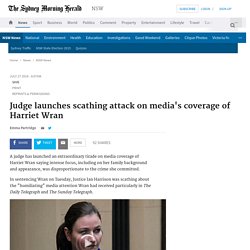 In sentencing Wran on Tuesday, Justice Ian Harrison was scathing about the "humiliating" media attention Wran had received particularly in The Daily Telegraph and The Sunday Telegraph.