The Gambler Who Cracked the Horse-Racing Code. Horse racing is something like a religion in Hong Kong, whose citizens bet more than anyone else on Earth. 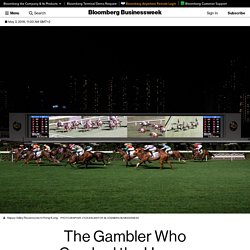 Computing for the very curious. The Net’s Good Old Boys (2) – Progressive Pilgrim Review. Part 2: If We Only Knew Then Continued from Hacking the Arpanet Although it seems like it, the Internet just didn’t assemble itself from a kit. 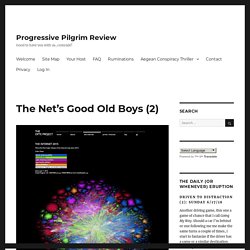 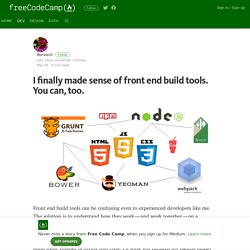 The solution is to understand how they work — and work together — on a conceptual level. This article presents my opinionated approach to making sense of front end build tools. Instead of diving into code, I’ll walk you through my mental model of how these tools work and what they accomplish. Don’t be intimidated by the state of the art Node, NPM, Grunt, Gulp, Bower, Webpack, Browserify, Yeoman, Brunch… there are so many front-end build tools out there that it can seem impossible to keep up. What does it mean when code is “easy to reason about”?

You’ve probably heard the expression “easy to reason about” enough times to make your ears bleed. 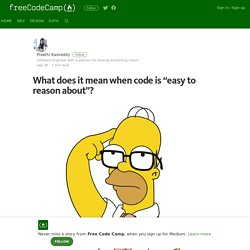 The first time I heard this expression, I had no idea what the person meant by it. Does it mean functions that are easy to understand? Google Search Operators. The following table lists the search operators that work with each Google search service. 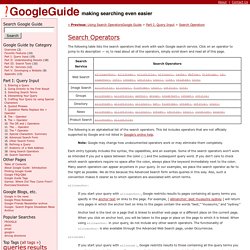 Click on an operator to jump to its description — or, to read about all of the operators, simply scroll down and read all of this page. The following is an alphabetical list of the search operators. 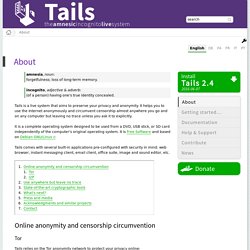 Tails is a live system that aims to preserve your privacy and anonymity. It helps you to use the Internet anonymously and circumvent censorship almost anywhere you go and on any computer but leaving no trace unless you ask it to explicitly. It is a complete operating system designed to be used from a DVD, USB stick, or SD card independently of the computer's original operating system. It is Free Software and based on Debian GNU/Linux. Tails comes with several built-in applications pre-configured with security in mind: web browser, instant messaging client, email client, office suite, image and sound editor, etc.

Tor Tails relies on the Tor anonymity network to protect your privacy online: Using Tor you can: To learn more about Tor, see the official Tor website, particularly the following pages: Quora. Stealthy malware targeting air-gapped PCs leaves no trace of infection. Researchers have discovered highly stealthy malware that can infect computers not connected to the Internet and leaves no evidence on the computers it compromises. 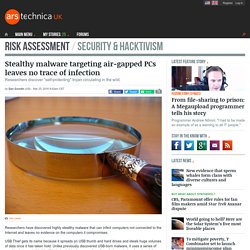 USB Thief gets its name because it spreads on USB thumb and hard drives and steals huge volumes of data once it has taken hold. Unlike previously discovered USB-born malware, it uses a series of novel techniques to bind itself to its host drive to ensure it can't easily be copied and analyzed. It uses a multi-staged encryption scheme that derives its key from the device ID of the USB drive. Meet KeySweeper, the $10 USB charger that steals MS keyboard strokes. Undocumented iOS Features left Hidden Backdoors Open in 600 Million Apple Devices. A well known iPhone hacker and forensic scientist has unearthed a range of undocumented and hidden functions in Apple iOS mobile operating system that make it possible for a hacker to completely bypass the backup encryption on iOS devices and can steal large amounts of users’ personal data without entering passwords or personal identification numbers. 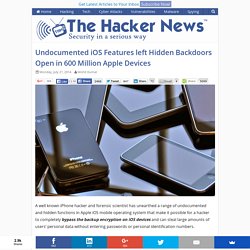 Data forensics expert named Jonathan Zdziarski has posted the slides (PDF) titled “Identifying Backdoors, Attack Points, and Surveillance Mechanisms in iOS Devices” showing his findings, from his talk at the Hackers On Planet Earth (HOPE X) conference held in New York on Friday. Jonathan Zdziarski, better identified as the hacker "NerveGas" in the iPhone development community, worked as dev-team member on many of the early iOS jailbreaks and is also the author of five iOS-related O'Reilly books including "Hacking and Securing iOS Applications.

" Raymond Wang: How germs travel on planes. Close Help with subtitles Desktop / laptop users: please make sure you have the most updated versions of your browser and Flash player, and that Flash is enabled when you visit TED.com. iOS users: to access subtitles, start playing the video, then tap the speech bubble icon that appears in the bottom row of video controls. 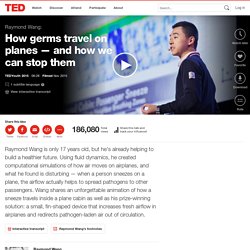