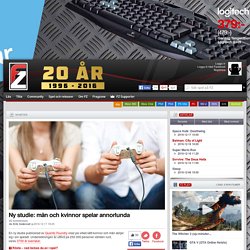 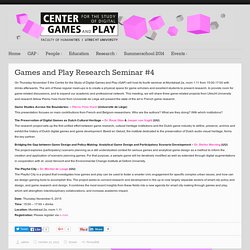 Dr. Video Games: Reflections of a PhD Graduate. [cross-posted to CGP and markdangerchen.net] After I defended (YouTube) and submitted (PDF) my dissertation, for a few weeks I’d been meaning to write some reflections on the whole PhD process. 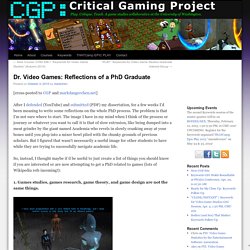 The problem is that I’m not sure where to start. The image I have in my mind when I think of the process or journey or whatever you want to call it is that of slow extrusion, like being dumped into a meat grinder by the giant named Academia who revels in slowly cranking away at your bones until you plop into a mixer bowl piled with the chunky grounds of previous scholars. CFP: Game Research Methods. During the last few years, several textbooks for game students have become available. 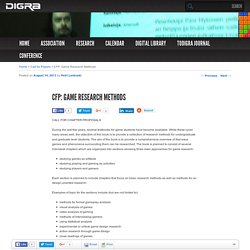 While these cover many areas well, the objective of this book is to provide a collection of research methods for undergraduate and graduate level students. The aim of the book is to provide a comprehensive overview of that ways games and phenomena surrounding them can be researched. AkiJarvinen Dissertation. Truth about gamers. GamesForImpact BestPractices. 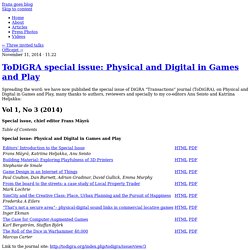 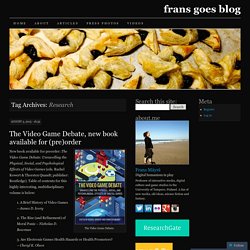 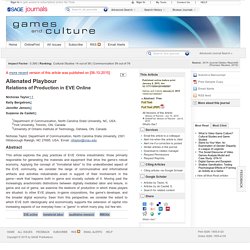 Email: nttaylor@ncsu.edu Abstract This article explores the play practices of EVE Online industrialists: those primarily responsible for generating the materials and equipment that drive the game’s robust economy. Applying the concept of “immaterial labor” to this underattended aspect of the EVE community, we consider the range of communicative and informational artifacts and activities industrialists enact in support of their involvement in the game—work that happens both in game and crucially outside of it. Article Notes.

Animated Frustration or the Ambivalence of Player Agency. Abstract Frustration is an everyday experience for many users of game media. 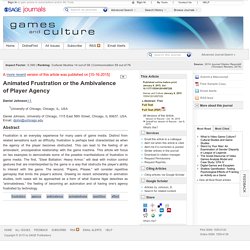 Distinct from related sensations such as difficulty, frustration is perhaps best characterized as when the agency of the player becomes obstructed. Untitled. Paper283. The Design and Emotion Society. 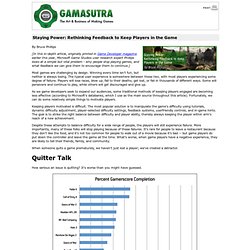 Most games are challenging by design. Winning every time isn't fun, but neither is always losing. The typical user experience is somewhere between these two, with most players experiencing some degree of failure. As we game developers seek to expand our audiences, some traditional methods of keeping players engaged are becoming less effective (according to Microsoft's databanks, which I use as the main source throughout this article). Keeping players motivated is difficult. Despite these attempts to balance difficulty for a wide range of people, the players will still experience failure. Five Ways Games Appeal to Players. Five Ways Games Appeal to Players By Jason Tocci I once happened upon my brothers attempting to fly an SUV off a cliff. 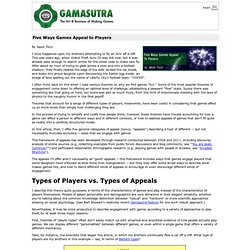 This was years ago, when Grand Theft Auto III was still new, but it was already easy enough to search online for the cheat code to make cars fly. After about an hour of trying to glide across a river and into a football stadium, they finally cleared the edge of the wall, landed the car inside, and broke into proud laughter upon discovering the Easter egg inside: an image of fans spelling out the name of Liberty City's football team: "COCKS". I often think back on this when I read various theories on why we find games "fun. " We're Not Listening: An Open Letter to Academic Game Researchers. We're Not Listening: An Open Letter to Academic Game Researchers By John Hopson Academic interest in games has risen quickly over the past decade, but the games industry has never shown a similar interest in academic work. Every year there are books, journals, and conferences dedicated to studying games and how people play them, but most games professionals never read this work nor attend these conferences.

Sure, individual designers, producers, and developers listen, but the industry as a whole has ignored an entire field of study dedicated to studying it. There have been academic panels at industry conferences, but the vast majority of the conference attendees have walked right on past. Industry Facts. Research Games. The goal of this project is to build a platform for research in behavioural game theory on social networking sites which will enable experiments of unprecedented scale, resolution, interactivity and social embedding.

We aim at testing the behaviour of real people in game theoretic interactions in social networks. How do people negotiate with one another? How can we aggregate opinions of individuals to arrive at high-quality decisions? In what ways do people reciprocate other people’s actions? The ways in which people interact, socialize and communicate have dramatically changed in recent years due to internet-based technologies. Classical game theory makes predictions regarding how rational agents would behave in strategic settings, such as in the domain of advertising, during business interactions, and on the job market. Video Game Research. Www.journalofplay.org/sites/www.journalofplay.org/files/pdf-articles/1-4-article-hunter-gatherer-social-existence.pdf. Manifesto: The 21st Century Will Be Defined By Games.

Previous centuries have been defined by novels and cinema. In a bold manifesto we’re proud to debut here on Kotaku, game designer Eric Zimmerman states that this century will be defined by games.ore Below is Zimmerman’s manifesto, which will also appear in the upcoming book The Gameful World from MIT press. We invite you to read it, to think about it and even to annotate it. Zimmerman’s manifesto is followed by an exploration of the ideas behind it, in an essay by author and professor Heather Chaplin. In the days to come, we’ll be expanding the discussion even further with perspectives from other gamers and game-thinkers. Games.

Moments of innovation – interactive. Blog.119crew.org.ro/wp-content/uploads/2013/04/Growing-Up-Online-Young-People-And-Digital-Technologies.pdf. Game Theory, Popular Science. On test day for my Behavioral Ecology class at UCLA, I walked into the classroom bearing an impossibly difficult exam. Rather than being neatly arranged in alternate rows with pen or pencil in hand, my students sat in one tight group, with notes and books and laptops open and available. They were poised to share each other's thoughts and to copy the best answers. As I distributed the tests, the students began to talk and write. All of this would normally be called cheating. But it was completely OK by me. Researcher Links to Play and Game Research Organizations. Narratology and Narration in Film and Transmedia Storytelling. Mechanizing Exploratory Game Design (Adam M. Smith) In one sentence: The designer sketches a space of appropriate artifacts with a constraint program, and the machine samples an artifact from the space; upon examining the artifact, the designer refines the sketch.

However, game research literature says only little about how to design gameplay so that it reflects characters’ personality; mainly focusing on the narration and graphical presentation of the characters. This paper presents a character-driven game design method, which uses ideas from dramatic character design to include gameplay into the design process. Based upon previous work on NPC design and a new analysis, several design choices regarding gameplay are identified. Categories and Subject Descriptors: K.8.0 [Personal Computing]: General – Games. General Terms: Design, Human Factors. Keywords:Gameplay design, game design, player character, non-player character.

The paper is divided into five parts. Intellect Ltd. Call for Papers Contributors are asked to follow JGVW's Notes for Contributors and the Intellect Style Guide. Redirect Notice. Ancient d20 die emerges from the ashes of time. Let's go back in time. Way back. Keep going. OK, stop. Game Studies 0102: Cultural framing of computer/video games. By Kurt Squire. By Kurt Squire Since their inception, computer and video games have both fascinated and caused great fear in the politicians, educators, academics, and the public at large.

In the United States, this fear and fascination goes back to the early 1980s, when Ronald Reagan extolled the virtues of games to create a generation of highly skilled cold war warriors, while U.S. Surgeon General C. Everett Koop proclaimed games among the top health risks facing Americans. The Games Economists Play - Implications of Economic Game Theory for the Study of Computer Games. Game Studies 0101: Eskelinen: The Gaming Situation. Interactivity, Inhabitation and Pragmatist Aesthetics. By Phillip D. Game analysis: Developing a methodological toolkit for the qualitative study of games. By Mia Consalvo, Nathan Dutton. Video Game History Timeline. Situated Research The Future of Gaming: A Portrait of the New Gamers. In the spring of 2011, Latitude Research launched a study to understand the recent explosion in gaming, driven in part by the popularity of mobile phones and tablets.

Specifically, the study sought to uncover how the profile of the stereotypical gamer has changed, various motivations for gaming, and the evolving role of games in moving traditionally online experiences into the “offline” world—suggesting new opportunities for game and technology developers, educators, and social innovators. Taekwan Kim's Blog - Validation Theory. The following blog post, unless otherwise noted, was written by a member of Gamasutra’s community. Intellect Ltd. International Journal of Game Theory-incl.