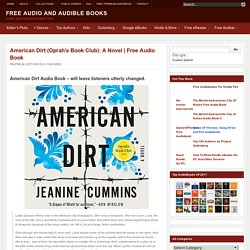 Lydia Quixano Pérez lives in the Mexican city of Acapulco. She runs a bookstore. She has a son, Luca, the love of her life, and a wonderful husband who is a journalist. And while there are cracks beginning to show in Acapulco because of the drug cartels, her life is, by and large, fairly comfortable.Even though she knows they’ll never sell, Lydia stocks some of her all-time favorite books in her store. American Sniper: Autobiography of the Most Lethal Sniper in U.S. Military History. American Sniper Review -“Rough and tumble Texas boy makes USA proud” This book is a fascinating account of someone that lived a horrifying scenario without blinking. 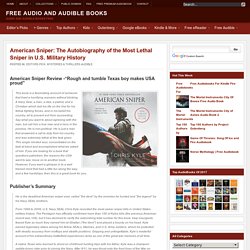 A Navy Seal, a man, a dad, a patriot, and a Christian which laid his life on the line for his fellow fighting forces, and in his belief his country, all to prevent evil from succeeding. Say what you want to about agreeing with the man, but call him a true man and a hero in the process. He is non-political. He is just a man that answered a call to duty from his country, and was extremely lethal at the task given. Publisher’s Summary He is the deadliest American sniper ever, called “the devil” by the enemies he hunted and “the legend” by his Navy SEAL brothers.From 1999 to 2009, U.S. Written by: Chris Kyle, Scott McEwan, Jim DeFeliceNarrated by: John PrudenLength: 10 hrs and 22 minsUnabridged Audiobook Learn how to get this audio book free (on audiobooks.com) The Girl on the Train: A Novel by Paula Hawkins AudioBook. 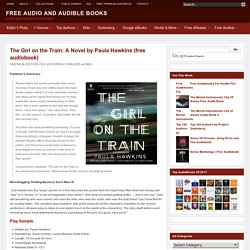 Every day she rattles down the track, flashes past a stretch of cozy suburban homes, and stops at the signal that allows her to daily watch the same couple breakfasting on their deck. She’s even started to feel like she knows them. “Jess and Jason,” she calls them. Their life—as she sees it—is perfect. Mind Boggling Thrilling Mystery! Enders by Lissa Price - Free Audiobook. Publisher’s Summary The riveting conclusion to the sci-fi thriller Starters. 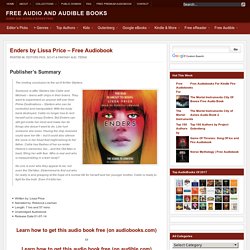 Someone is after Starters like Callie and Michael – teens with chips in their brains. They want to experiment on anyone left over from Prime Destinations – Starters who can be controlled and manipulated. With the body bank destroyed, Callie no longer has to rent herself out to creepy Enders. But Enders can still get inside her mind and make her do things she doesn’t want to do. The Liar by Nora Roberts. Publisher’s Summary The extraordinary new novel by the #1 New York Times best-selling author of The Collector.Shelby Foxworth lost her husband. 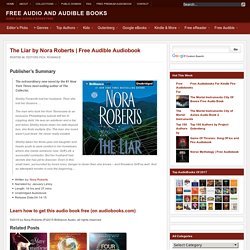 Then she lost her illusions….The man who took her from Tennessee to an exclusive Philadelphia suburb left her in crippling debt. He was an adulterer and a liar, and when Shelby tracks down his safe-deposit box, she finds multiple IDs. The man she loved wasn’t just dead. Fire & Blood: Before A Game of Thrones (A Targaryen History) Free Audiobook. 300 Years Before A Game of Thrones (A Targaryen History) The thrilling history of the Targaryens comes to life in this masterly work by the author of A Song of Ice and Fire, the inspiration for HBO’s Game of Thrones. 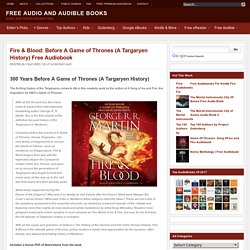 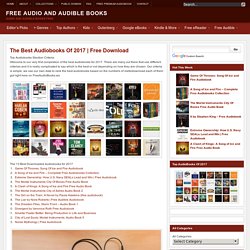 There are many out there that use different criterias and it is really complicated to say which is the best or not depending on how they are chosen. Deep Freeze By John Sandford. Deep Freeze: Summary Class reunions: a time for memories-good, bad, and, as Virgil Flowers is about to find out, deadly-in the thrilling new novel in the #1 New York Times-bestselling series. 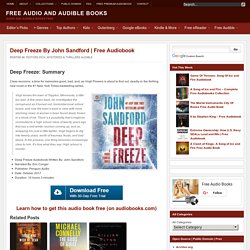 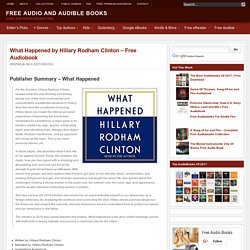 Now free from the constraints of running, Hillary takes you inside the intense personal experience of becoming the first woman nominated for president by a major party in an election marked by rage, sexism, exhilarating highs and infuriating lows, stranger-than-fiction twists, Russian interference, and an opponent who broke all the rules. This is her most personal memoir yet.In these pages, she describes what it was like to run against Donald Trump, the mistakes she made, how she has coped with a shocking and devastating loss, and how she found the strength to pick herself back up afterward. With humor and candor, she tells readers what it took to get back on her feet-the rituals, relationships, and reading that got her through, and what the experience has taught her about life. What Happened by Hillary Rodham Clinton - Free Audiobook. It by Stephen King - Free Audiobook. Publisher Summary – It To the children, the town was their whole world. 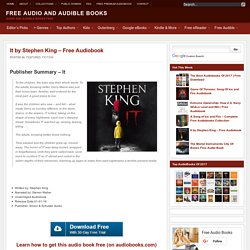 To the adults, knowing better, Derry Maine was just their home town: familiar, well-ordered for the most part. A good place to live.It was the children who saw – and felt – what made Derry so horribly different. In the storm drains, in the sewers, IT lurked, taking on the shape of every nightmare, each one’s deepest dread. Sometimes IT reached up, seizing, tearing, killing . . .The adults, knowing better, knew nothing.Time passed and the children grew up, moved away. Giant of the Senate: Al Franken. AL FRANKEN, GIANT OF THE SENATE is a book about an unlikely campaign that had an even more improbable ending: the closest outcome in history and an unprecedented eight-month recount saga, which is pretty funny in retrospect. It’s a book about what happens when the nation’s foremost progressive satirist gets a chance to serve in the United States Senate and, defying the low expectations of the pundit class, actually turns out to be good at it.

It’s a book about our deeply polarized, frequently depressing, occasionally inspiring political culture, written from inside the belly of the beast. Shadowhunter Academy: The Mortal Instruments. Tales from the Shadowhunter Academy The New York Times and USA Today best-selling collection of short stories chronicling the adventures of Simon Lewis as he trains to become a Shadowhunter is now available for the first time with an all-star cast of narrators! Simon Lewis has been a human and a vampire, and now he is becoming a Shadowhunter. The events of City of Heavenly Fire left him stripped of his memories, and Simon isn’t sure who he is anymore.

Norse Mythology. Introducing an instant classic – master storyteller Neil Gaiman presents a dazzling version of the great Norse myths. Neil Gaiman has long been inspired by ancient mythology in creating the fantastical realms of his fiction. Now he turns his attention back to the source, presenting a bravura rendition of the great northern tales. Extreme Ownership: How U.S. Navy SEALs Lead and Win.

In Extreme Ownership, Jocko Willink and Leif Babin share hard-hitting, Navy SEAL combat stories that translate into lessons for business and life. With riveting first-hand accounts of making high-pressure decisions as Navy SEAL battlefield leaders, this book is equally gripping for leaders who seek to dominate other arenas. Jocko and Leif served together in SEAL Task Unit Bruiser, the most highly decorated Special Operations unit from the war in Iraq.

Their efforts contributed to the historic triumph for U.S. forces in Ramadi. Through those difficult months of sustained combat, Jocko, Leif and their SEAL brothers learned that leadership–at every level–is the most important thing on the battlefield. They started Echelon Front to teach these same leadership principles to companies across industries throughout the business world that want to build their own high-performance, winning teams. The Revenant: A Novel of Revenge Free Audio Book. The year is 1823, and the trappers of the Rocky Mountain Fur Company live a brutal frontier life. Trapping beaver, they contend daily with the threat of Indian tribes turned warlike over the white men’s encroachment on their land, and other prairie foes-like the unforgiving landscape and its creatures. Hugh Glass is among the Company’s finest men, an experienced frontiersman and an expert tracker.

But when a scouting mission puts him face-to-face with a grizzly bear, he is viciously mauled and not expected to survive.The Company’s captain dispatches two of his men to stay behind and tend to Glass before he dies, and to give him the respect of a proper burial. Learn How To Get This Audio Book Free ON Audiobooks.com. American Sniper: Autobiography of the Most Lethal Sniper in U.S. Military History. A Clash of Kings: A Song of Ice and Fire Free Audio Book Download. Publisher’s Summary. Peter Clines The Fold - Free Audio Book. Peter Clines The Fold - Free Audio Book. A Song of Ice and Fire - Complete Free Audiobooks Collection. Free Audio and Audible Books. The Girl on the Train: A Novel by Paula Hawkins AudioBook. The Mortal Instruments City Of Bones Free Audio Book. Divergent by Veronica Roth Unabridged (Audiobook) Customer Review.

Firefight: Reckoners by Brandon Sanderson. Firefight Review – “Fabulous, A Must Read Sequal” Gone Girl: A Novel by Gillian Flynn - Free Audio Book. Marriage can be a real killer. One of the most critically acclaimed suspense writers of our time, New York Times best seller Gillian Flynn, takes that statement to its darkest place in this unpausable masterpiece about a marriage gone terribly, terribly wrong. Those Who Wish Me Dead by Michael Koryta. Customer Review – “Best Bad Guys EVER!” As consistent as he has always been for me, I think Michael Koryta has just outdone himself this time. This book is superior.Michael Koryta novels always contain s a well thought out scenario that feel like they have been well researched, including antidotes, details and descriptions that leave you feeling like he is writing about his life’s work in his back yard. Neverwhere [Adaptation] by Neil Gaiman - Audiobook Free. Neverwhere Customer Review – “This Cast Needs to Make This Movie NOW” I’m a huge Neverwhere fan – the kind that is always pining for any kind of hint or glimmer of the Seven Sisters (ONE DAY WE SHALL HAVE OUR SEQUEL) or film adaptation.

This radioplay is nothing short of superb, and a must for Neverwhere fans.This cast brings London Below to life way better than any I could’ve fancasted. McAvoy makes Richard not only good and sweet and earnest, but someone you can’t help but love. Dan Brown Inferno Download Free Audio book. Has it been almost four years since the last Dan Brown novel? Yes it has! Pin by DiTesco on Free Audio Books. Pin by DiTesco on Free Audio Books. Insurgent: Divergent by Veronica Roth, Free AudioBook 2. David and Goliath: Underdogs, Misfits, and the Art of Battling Giants Audiobook. Persuader by Lee Child. Sycamore Row Written by John Grisham Audio Book. Mockingjay: The Final Book of The Hunger Games Audio Book.