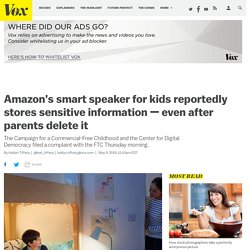 The 96-page complaint was co-authored by the Campaign for a Commercial-Free Childhood (CCFC) and the Center for Digital Democracy (CDD), and co-signed by 17 other digital privacy and children’s rights organizations. Digital assistants like Siri and Alexa entrench gender biases, says UN. Assigning female genders to digital assistants such as Apple’s Siri and Amazon’s Alexa is helping entrench harmful gender biases, according to a UN agency. 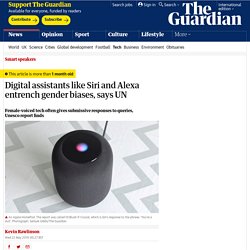 Research released by Unesco claims that the often submissive and flirty responses offered by the systems to many queries – including outright abusive ones – reinforce ideas of women as subservient. “Because the speech of most voice assistants is female, it sends a signal that women are obliging, docile and eager-to-please helpers, available at the touch of a button or with a blunt voice command like ‘hey’ or ‘OK’,” the report said. “The assistant holds no power of agency beyond what the commander asks of it. It honours commands and responds to queries regardless of their tone or hostility. In many communities, this reinforces commonly held gender biases that women are subservient and tolerant of poor treatment.”

“This harassment is not, it bears noting, uncommon. Amazon's Alexa WILL listen to everything you say. Amazon Alexa will soon record EVERYTHING you say rather than wait to hear its name first, new patent reveals Alexa currently waits to detect its wake word before recording audio clips Patent suggests it could constantly record audio waiting to hear the word Would take 30 second snippets and delete each one if no wake word detected Patent doesn't suggest it will be installed in future Alexa-enabled devices By Joe Pinkstone For Mailonline Published: 09:33 EDT, 28 May 2019 | Updated: 15:46 EDT, 30 May 2019 Alexa's poor reputation for privacy may soon worsen as a patent filed by the firm suggests the virtual assistant may start listening before its 'wake word' is said. 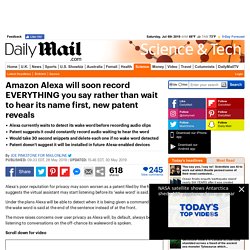 Under the plans Alexa will be able to detect when it is being given a command even if the wake word is said at the end of the sentence instead of at the front. The move raises concerns over user privacy as Alexa will, by default, always be listening to conversations on the off-chance its wakeword is spoken. Arstechnica. Amazon accused of violating child privacy laws with Alexa recordings. Google: Google, Amazon want smart home devices to mine even more of your data, Technology News, ETtech. By Matt Day As Amazon and Google work to place their smart speakers at the center of the internet-connected home, both technology giants are expanding the amount of data they gather about customers who use their voice software to control other gadgets. 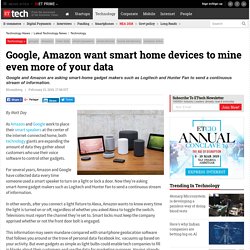 For several years, Amazon and Google have collected data every time someone used a smart speaker to turn on a light or lock a door. Now they’re asking smart-home gadget makers such as Logitech and Hunter Fan to send a continuous stream of information. In other words, after you connect a light fixture to Alexa, Amazon wants to know every time the light is turned on or off, regardless of whether you asked Alexa to toggle the switch. Televisions must report the channel they’re set to. This information may seem mundane compared with smartphone geolocation software that follows you around or the trove of personal data Facebook Inc. vacuums up based on your activity. Illinois Homeowner's Blood 'Ran Cold' as Smart Cameras, Thermostat Hacked, He Says. A Lake Barrington homeowner hasn’t had a restful night’s sleep in 10 days, after he said his Nest home security cameras and thermostats were accessed by malicious hackers. 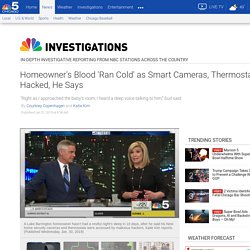 “I couldn’t believe that these devices that I had put up in my home to watch over it, my family, were now being used against me,” said Arjun Sud. Sud tells NBC 5 Investigates that shortly after he and his wife put their 7-month-old son to bed on Jan. 20, they heard a strange noise coming from inside the nursery. Amazon admits Alexa is creepily laughing at people and is working on a fix. Over the past few days, users with Alexa-enabled devices have reported hearing strange, unprompted laughter. 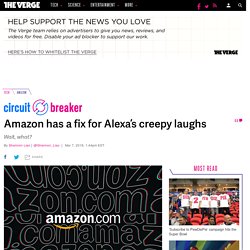 Amazon responded to the creepiness today in a statement to The Verge, saying, “We’re aware of this and working to fix it.” Later on in the day, Amazon said its planned fix will involve disabling the phrase, “Alexa, laugh,” and changing the command to “Alexa, can you laugh?” The company says the latter phrase is “less likely to have false positives,” or in other words the Alexa software is likely to mistake common words and phrases that sound similar to the one that makes Alexa start laughing. Amazon Alexa heard and sent private chat - BBC News. Image copyright Amazon A couple in Portland, Oregon joked that their Amazon Alexa might be listening in to their private conversations. 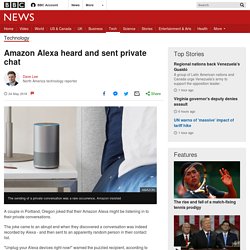 The joke came to an abrupt end when they discovered a conversation was indeed recorded by Alexa - and then sent to an apparently random person in their contact list. "Unplug your Alexa devices right now! " warned the puzzled recipient, according to CBS affiliate station KIRO7, which first reported the story. Amazon Does The Unthinkable And Sends Alexa Recordings To The Wrong Person. Get lost, Alexa: most Britons shun digital assistants over spying fears. Can your smart home be used against you in court? – TechCrunch. On a November, 2015 morning in Bentonville, Arkansas, first responders discovered a corpse floating in a hot tub. 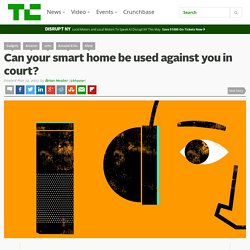 The home’s resident, James Andrew Bates, told authorities he’d found the body of Victor Collins dead that morning. He’d gone to bed at 1 AM, while Collins and another friend stayed up drinking. This past December, The Information reported that authorities had subpoenaed Amazon over the case. The police were considering Bates a suspect in what they suspected was a murder after signs of a struggle were found at the scene. They hoped his Echo might hold some insights into what happened the night before. Amazon initially pushed back against the request, citing First Amendment protections, but ultimately conceded when Bates agreed to allow the information to be handed over to police.

While Amazon’s fight has been rendered moot, this case lays groundwork for some tough and important conversations to come, raising a slew of fascinating questions around the technologies. Amazon Agrees to Hand Over Data in Echo Murder Case. Amazon resists Echo murder evidence call. Image copyright Amazon Amazon is continuing to resist efforts by prosecutors in a US murder case to obtain recordings from one of its Echo smart speakers. 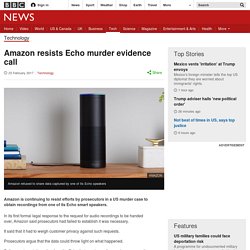 In its first formal legal response to the request for audio recordings to be handed over, Amazon said prosecutors had failed to establish it was necessary. It said that it had to weigh customer privacy against such requests. Prosecutors argue that the data could throw light on what happened. Police want any information from the Echo that may be on Amazon's servers on the night of Victor Collins' death. Privacy implications. Amazon refuses to let police access US murder suspect's Echo recordings.

Amazon has refused to hand over data from an Echo smart speaker to US police, who want to access it as part of an investigation into a murder in Arkansas, according to court records seen by tech industry news site The Information. 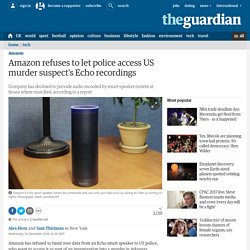 Arkansas police issued a warrant to Amazon to turn over recordings and other information associated with the device owned by James Andrew Bates. Bates has been charged with the murder of a man found dead in his hot tub in November 2015. The Seattle-based tech company twice declined to provide the police with the information they requested from the device, although it did provide Bates’s account information and purchase history, the report said court records show. Although the Echo is known for having “always-on” microphones to enable its voice-controlled features, the vast majority of the recordings it makes are not saved for longer than the few seconds it takes to determine if a pre-set “wake word” (usually “Alexa”) has been said.

Amazon Refuses To Comply With Police Request For Amazon Echo Recordings In Murder Case. Well, you knew this was coming sooner or later. Reports came out this week (via the paywalled site The Information) that law enforcement in Bentonville, Arkansas issued a warrant to Amazon asking for any recordings that Amazon had from its Echo device that may have been relevant to a murder case they're working on.

At issue is the Amazon Echo device owned by James Andrew Bates, who is accused of murdering Victor Collins a year ago. The key bit of information here is that Amazon refused to hand over any recordings that it might have logged, but did hand over more general information about Bates' account and purchases. Of course, just the request for possible audio information has lots of people paying attention. This kind of thing has been predicted for ages -- now that pretty much everyone has "always on" microphones all around them in the form of either internet-of-things connected devices like the Echo, or merely your mobile phone with Apple's Siri or Google Now.

Alexa is the voice activated service that powers Amazon's Echo, which enables customers to interact with devices in a more intuitive way using voice. It plays music and provides information, such as news, sports scores and weather updates. Amazon Echo saves all your voice data, here's how to hear and delete it. Amazon’s Echo built upon the voice search capability of Android’s ‘Ok Google’ and Apple’s Siri and turned it into a device that is capable of doing everything from answering questions to turning on your on your air conditioner.

However, like all beneficial technology, when the government gets involved, this useful household item is converted into a spying machine for the surveillance state. In a seemingly unprecedented case out of Bentonville, Arkansas, the latest example of how police can use your technology against you is coming to fruition. Investigators in Bentonville have filed search warrants with Amazon, requesting the recordings made on a man’s Echo device between November 21 and November 22, 2015. Alexa and Google Home Record What You Say. What Happens to Your Data? If you got an Amazon Echo or Google Home voice assistant, welcome to a life of luxurious convenience. You’ll be asking for the weather, the news, and your favorite songs without having to poke around on your phone. You’ll be turning off lights and requesting videos from bed.

The world is yours. But you know what?