The Structure Sensor is the first 3D sensor for mobile devices 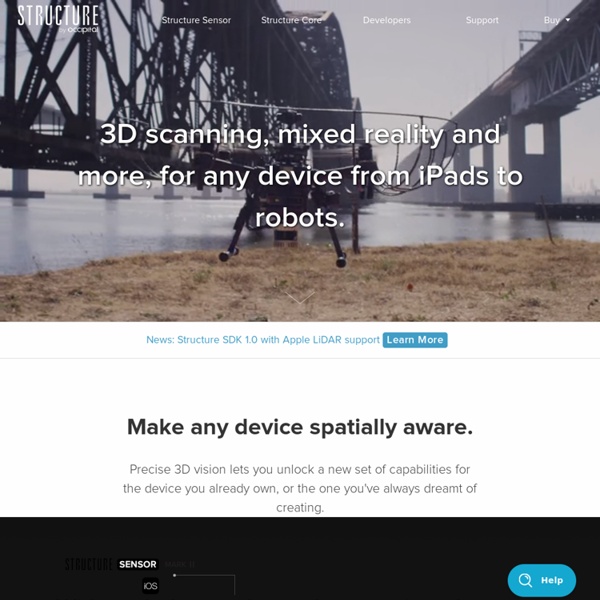 Augmented reality - News & Rumors Posts Tagged «augmented reality» Google joins the VR war, invests in light field ‘cinematic reality’ company Magic Leap (updated) October 21, 2014 at 1:10 pmGoogle is getting into virtual reality. It was only a matter of time: With Google still looking for The Next Big Thing — and Facebook’s acquisition of Oculus VR, Sony’s Project Morpheus, and many other companies and startups taking a fresh look at VR over the last couple of years — it was forced to finally wade in. The target of Google’s affection is a startup called Magic Leap, a secretive company that is developing some kind of ‘cinematic reality’ headset, which uses a ‘digital light field’ to project ultra-realistic images into your eyeballs. MIT’s ‘Kinect of the future’ can track you through walls October 18, 2013 at 9:33 amResearchers from MIT have unveiled a new form of motion tracking that uses a three-point system to follow a person’s position, even through a totally opaque wall.

Structure Sensor: Capture the World in 3D by Occipital The Structure Sensor gives mobile devices the ability to capture and understand the world in three dimensions. With the Structure Sensor attached to your mobile device, you can walk around the world and instantly capture it in a digital form. This means you can capture 3D maps of indoor spaces and have every measurement in your pocket. You can instantly capture 3D models of objects and people for import into CAD and for 3D printing. You can play mind blowing augmented reality games where the real world is your game world. If you’re a developer, Structure gives you the ability to build mobile applications that interact with the three dimensional geometry of the real world for the very first time.

An Excellent Quick-Start Guide To iPads For Learning An Excellent Quick-Start Guide To iPads For Learning While everyone you know has had an iPad since Miley Cyrus was less…sure of herself, for whatever reason, you just got one. Or an entire classroom of iPads. Magic Leap We know what you're thinking: "Who the heck are we? What is this all about? Why aren't you saying more?" This amazing accessory turns your iPad into a 3D scanner When most people play with a Kinect, the best they can hope for is a high score in Dance Central. When Occipital CEO Jeff Powers saw Microsoft's innovative sensor package for the first time he decided to change the direction of his company and got to work developing the Structure Sensor, a new 3D scanning tool that earned the company over $250,000 (£156,000) in a single day. Product designers can use their iPads and Occipital's anodised aluminium add-on to scan objects and create 3D models suitable for a MakerBot. Realtors can take advantage of its depth sensors to capture the dimensions of a room and create a 360-degree panoramic photo that can be embedded in a listing. Gamers will be able to use the slick sensor to play a bevy of games built on top of the Structure's open API. More than a cool gadget, the team at Occipital hopes to create a platform that will give smartphones and tablets a new set of super powers.

Microsoft's Hololens – what do virtual reality developers think? When Microsoft unveiled Windows 10 last Wednesday, the company had something else to show the assembled press – just in case a new operating system wasn’t exciting enough. This was the Hololens, a stand-alone augmented reality heardset, capable of projecting computer generated objected into your real-world environment. Look through its futuristic screen, and you may see a dinosaur on your coffee table, or a monster on your sofa. The device seemingly uses an array of motion senses, as well as a Kinect-style camera so that it knows where the wearer is in the room, and can also recognise objects. Imagine, for example, a horror game where a zombie could crash through your own living room window.

Skanect by Occipital 3D Scan From An iPad to Skanect on Your Mac or PC - Wirelessly There’s no easier way to capture high-quality, full-color 3D scans than with the Structure Sensor attached to your iPad streaming wirelessly to Skanect on your Mac or PC. But the Structure Sensor is much more than just a 3D scanner. It’s also a developer-friendly 3D sensing platform for mobile devices that lets you map indoor spaces, explore mixed reality worlds and much more. Compatible with iPad (5th generation), 9.7-inch iPad Pro, 12.9-inch iPad Pro, iPad Air 2, iPad Air, iPad mini 4, iPad mini 2/3 and iPad (4th generation) - and it’s developer hackable to work with Android, Linux, Windows and OS X too. See how to use Structure Sensor with Skanect >

50 Resources For Teaching With iPads A Collection Of The Best Resources For Teaching With The iPad by TeachThought Staff So we thought we’d start an ongoing collection–that is, one that is updated to reflect trends and changes–of the best resources for teaching with the iPad. This will include resources from all of the best sources, from Apple’s own stuff to TeachThought to edutopia to MindShift to DMLCentral to Jackie Gerstein and more. We can update it, or make it a wiki to crowdsource the process, or you can add suggestions in the comments below.

Structure Sensor Mobile 3D sensor by Occipital uses a custom chip based on PrimeSense's 3D sensing solution (PrimeSense: desenvolupador kinect). The sensor itself is designed to easily attach to a wide range of devices, including the Apple iPad, Android tablets and desktop platforms such as Windows, OS X and Linux. by userexperience Jan 23