(1) HUMAN's Musics - A film by Yann Arthus-Bertrand / Composed by Armand Amar. How to Play a Low B on the Recorder. The recorder is a fun and inexpensive instrument. 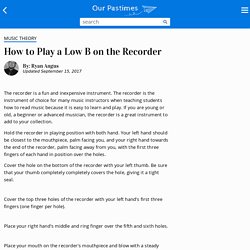 The recorder is the instrument of choice for many music instructors when teaching students how to read music because it is easy to learn and play. If you are young or old, a beginner or advanced musician, the recorder is a great instrument to add to your collection. Hold the recorder in playing position with both hand. Your left hand should be closest to the mouthpiece, palm facing you, and your right hand towards the end of the recorder, palm facing away from you, with the first three fingers of each hand in position over the holes. 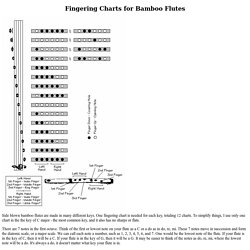 One fingering chart is needed for each key, totaling 12 charts. To simplify things, I use only one chart in the the key of C major - the most common key, and it also has no sharps or flats. There are 7 notes in the first octave. Think of the first or lowest note on your flute as a C or a do as in do, re, mi. These 7 notes move in succession and form the diatonic scale, or a major scale. (6) Learn Photography [Full Course] by Australian Geographic Photographer Chris Bray. This is the Coolest Sounding Instrument You Will Hear Today. Musician Marc Chouarain gives a brief demonstration and overview of a fascinating instrument called a Cristal Baschet, which he uses when composing music for film soundtracks. 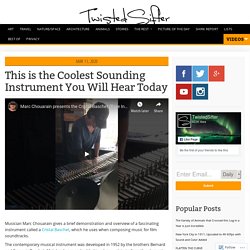 The contemporary musical instrument was developed in 1952 by the brothers Bernard and François Baschet. Metal rods are embedded in a heavy plate to form the elements. Each metal rod is accompanied by an attached glass rod. Ondophone - A New Music Instrument. Sonic Magic: The Wonder and Science of Sound. (2) 15 Incredible Musical Instruments You've Never Listened to. Fingerpicking Tips To Save Years of Guitar Practice. (2) Самые необычные музыкальные инструменты мира! 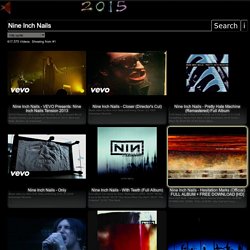 Showing from #1NEWSTop Videos Music Classical Listen FunnyFailsArtist ListAwwGamingMinisodeScienceTechnologyTEDTWiTTrailersM.M.PBSWSJAPCSPANCNNRTTMZE! Barrel Organ Rendition of Smooth Criminal is Surprisingly Catchy. How to easily convert any music to 432hz and why. A frequency is the number of movements up and down per second, called hertz. 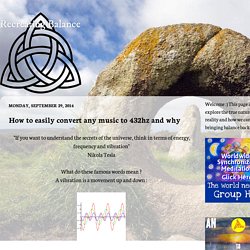 Energy is the ability to move, it is what fuels the movement up and down. 432hz tuning simply means that the note A in the middle of the musical scale will vibrate at 432hz, then all other notes along the scale are tuned accordingly. All octaves of the A note will be doubles or halves of that 432hz frequency (27, 54, 108, 216, 432, 864, etc) Here are various cosmic measurements, where we find the exact same numbers : Saturn polar diameter : 108,000 km Saturn orbital period : 10,800 day Venus orbital distance : 108 million km Earth orbital velocity : 108,000 km/hour Sun’s diameter is approximately 108 times the Earth diameter. 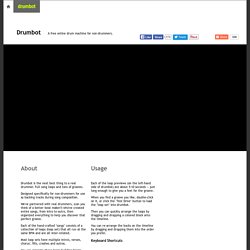 Full song loops and tons of grooves. Designed specifically for non-drummers for use as backing tracks during song composition. We've partnered with real drummers, (can you think of a better beat maker?) Who've created entire songs, from intro to outro, then organized everything to help you discover that perfect groove. Each of the hand-crafted "songs" consists of a collection of loops (loop set) that all run at the same BPM and are all inter-related. Most loop sets have multiple intro's, verses, chorus', fills, crashes and outros.

You can organize these basic building blocks into a unique arrangement that suits your needs. Mixxx - Free MP3 DJ Mixing Software. Audiotool - make music in your browser. Audacity: Free Audio Editor and Recorder.