The Story of Stars - beautiful video... - GTTP - Galileo Teacher Training Pro... Bright Side - As a kid I used to think Mars was red... The Universe in 4 Minutes. Silfra fissure, Iceland - Universe Explorers. Four Ways to Explore the News Through Maps. One of the things that I like about CNN Student News is that it almost always includes a map to show students where a story is taking place in the world. 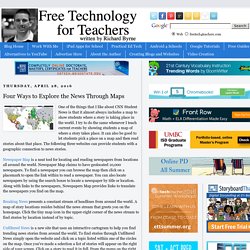 I try to do the same whenever I teach current events by showing students a map of where a story takes place. It can also be good to let students pick a place on a map and then read stories about that place. The following three websites can provide students with a geographic connection to news stories. Newspaper Map is a neat tool for locating and reading newspapers from locations all around the world. Newspaper Map claims to have geolocated 10,000 newspapers.

Breaking News presents a constant stream of headlines from around the world. Unfiltered News is a new site that uses an interactive cartogram to help you find trending news stories from around the world. Historical Newspapers Mapped The U.S. Learn how to create your own multimedia maps and more in my online course Teaching History With Technology. Seismic Waves - 2004 Sumatra Quake & Tsunami. iReleaseEndorphins. The Monash University Simple Climate Model. 10 Resources for Teaching and Learning About Weather. It's a rainy Sunday morning here in Maine. 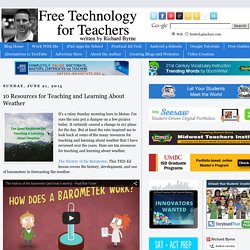 I'm sure the rain put a damper on a few picnics today. It certainly caused a change in my plans for the day. But at least the rain inspired me to look back at some of the many resources for teaching and learning about weather that I have reviewed over the years. Here are ten resources for teaching and learning about weather. The History of the Barometer. Why Are There Clouds? Thirstin's Water Cycle takes students on an animated and narrated tour of the water cycle from water, to vapor, to clouds, to rain.

NASA’s ‘Blue Marbles’: Pictures of Earth From 1972 to Today. Star Size Comparison HD. GE1 Laattatektoniikkaa. In case you missed it: See a stunning,... - National Geographic. Online - Maantietopelit. NASA Just Released The Largest Picture Ever Taken And It Will Shake Up Your U... El Nino Officially Declared for 2015. Just when everyone had pretty much written it off, the El Niño event that has been nearly a year in the offing finally emerged in February and could last through the spring and summer, the National Oceanic and Atmospheric Administration announced Thursday. 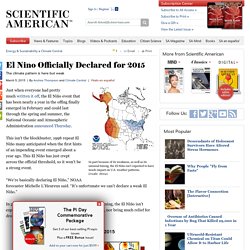 This isn’t the blockbuster, 1998 repeat El Niño many anticipated when the first hints of an impending event emerged about a year ago. This El Niño has just crept across the official threshold, so it won’t be a strong event. “We’re basically declaring El Niño,” NOAA forecaster Michelle L’Heureux said. “It’s unfortunate we can’t declare a weak El Niño.” In part because of its weakness, as well as its unusual timing, the El Niño isn’t expected to have much impact on U.S. weather patterns, nor bring much relief for drought-stricken California.

Sateen olomuotoon vaikuttaa lämpötila maan pinnan yläpuolella. The Known Universe by AMNH. An animated map of global wind, weather, and ocean conditions. Climate data for cities worldwide - Climate-Data.org. Huikea video: Tässä syy joulun revontuliin - valtava auringonpurkaus tallentui Nasan kameroille. Seasons and Ecliptic Simulator - Basic Coordinates and Seasons. Maankamara. What Will It Be Like to Live in a Dome for 8 Months, Pretending It's Mars? On Wednesday, three men and three women will step inside a thousand-square-foot dome on the north side of the Mauna Loa volcano in Hawaii. 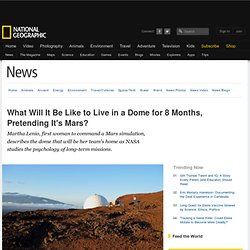 For the next eight months, they will be cut off from the outside world. The team will simulate life at a space station on Mars as part of a project called HI-SEAS, sponsored by NASA and led by the University of Hawaii at Manoa. Photograph courtesy University of Hawaii at Manoa The eight-month project is the second of three missions sponsored by NASA studying human performance on long-duration isolation missions. It's NASA's longest Mars simulation to date. Martha Lenio, 34, of Canada, is the mission's commander and the first woman to lead a Mars simulation. National Geographic talked to Lenio as she prepared to enter the dome. Linkkivinkit. The Scale of the Universe 2. Merivirta-simulaatio (NASA): Perpetual Ocean (2005-2007) Korkea kohtaa matalan » Merenkurkun saaristo. Sää ja ilmasto - Biologia ja maantiede. Itämerellä 26.7.2011 (kuva J. 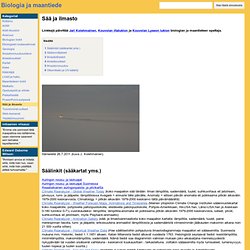 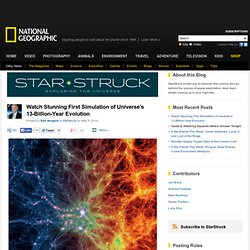 They just call them simulations. Now, one of the great triumphs of modern cosmology—our understanding of how the universe evolved its kaleidoscope of stars, worlds, and galaxies—has been visualized in its first realistic simulation: “Until now, no single simulation was able to reproduce the universe on both large and small scales simultaneously,” Mark Vogelsberger of MIT and the Harvard-Smithsonian Center for Astrophysics, who led the simulation team, says in a statement.