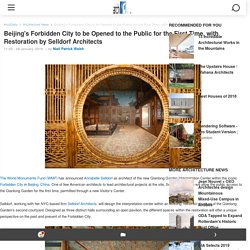 One of few American architects to lead architectural projects at the site, Selldorf’s scheme will allow the public access to the Qianlong Garden for the first time, permitted through a new Visitor’s Center. Selldorf, working with her NYC-based firm Selldorf Architects, will design the interpretation center within an existing, restored structure of the Qianlong Garden’s second courtyard. Historic Ottoman Architecture Adorned With Elaborate Birdhouse Designs. Historic Ottoman Architecture Adorned With Elaborate Birdhouse Designs. Modular Cardboard Cat Furniture is an Ever-Changing Playground. Z wizytą u architekta. BAZYLIKA MARIACKA W KRAKOWIE. Norway's New Hotel in the Arctic Circle Will Produce More Energy Than It Uses. A new hotel coming to Norway’s section of the Arctic Circle will be more than just a place to stay for a stunning fjord view. 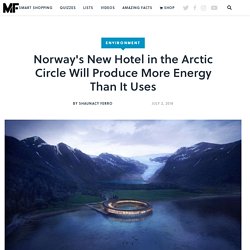 The Svart hotel, which is being billed as the world’s first "energy-positive" hotel, is designed to “set a new standard in sustainable travel,” according to Robb Report. Built by a tourism company called Arctic Adventure Norway and designed by Snøhetta, an international architecture firm headquartered in Oslo, it’s one of the first buildings created according to the standards of Powerhouse, a coalition of firms (including Snøhetta) devoted to putting up buildings that will produce more power over the course of 60 years than they take to build, run, and eventually demolish.

It will be located on a fjord at the base of Svartisen, one of the largest glaciers on Norway’s mainland and part of Saltfjellet-Svartisen National Park. The design of the hotel is geared toward making the facility as energy-efficient as possible. Stay overnight at the bauhaus and sleep with the modernist spirits. Interlocking indoor and outdoor levels bring Japanese house closer to nature.

For this lakeside house in Japan, Tokyo-based studio Sugawaradaisuke used five interlocking levels to create multiple viewing platforms both inside and outside the property. 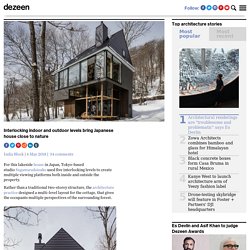 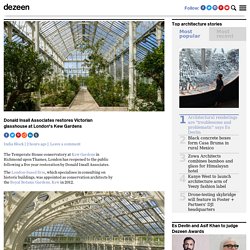 The London-based firm, which specialises in consulting on historic buildings, was appointed as conservation architects by the Royal Botanic Gardens, Kew in 2012. A masterpiece of 19th-century design, the Grade I listed building is the largest surviving Victorian glasshouse in the world. Over 190 metres long, the plant house has a rectangular plan, with pitched roofs, stone columns and ribs of wrought iron. Designed and built by architect Decimus Burton in 1860, the Temperate House is home to 10,000 plants, many of which are rare or endangered species. In the 1970s it fell into disrepair, before being restored in the early 1980s. The current restoration project is reported to have cost £41 million. Afrofuturism is "creating a different narrative for Africa" say creatives.

The success of the movie Black Panther and its afrofuturist aesthetic has put Africa in the spotlight as a growing force in design, technology and fashion, according to designers from the continent. 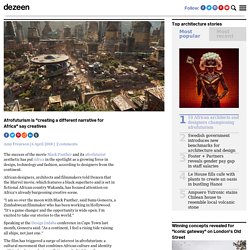 African designers, architects and filmmakers told Dezeen that the Marvel movie, which features a black superhero and is set in fictional African country Wakanda, has focused attention on Africa's already burgeoning creative scene. "I am so over the moon with Black Panther, said Sunu Goneera, a Zimbabwean filmmaker who has been working in Hollywood. "It's a game changer and the opportunity is wide open. 10 African architects and designers championing afrofuturism. Afrofuturism has become the buzzword for the fast-growing creative scene across Africa. 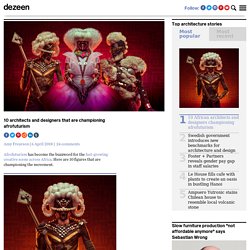 Here are 10 figures that are championing the movement. Osborne Macharia This creative photographer from Nairobi, Kenya, describes all his work as being within the afrofuturist genre. A recent commission from Marvel saw him produce a series of images for the Black Panther cinema release, bringing together Maasai traditions and science fiction. New owners preserve mid-century modern Indiana home. A 1960s prefabricated dwelling in northern Indiana has been preserved by Karen Valentine and Bob Coscarelli, who purchased the home without ever seeing it in person. 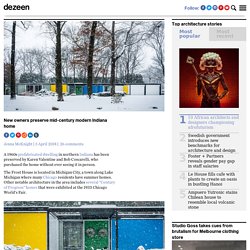 The Frost House is located in Michigan City, a town along Lake Michigan where many Chicago residents have summer homes. Other notable architecture in the area includes several "Century of Progress" homes that were exhibited at the 1933 Chicago World's Fair. Valentine, a talent strategy executive, and Coscarelli, a commercial photographer, purchased the residence in 2016 from original owners Dr Robert Frost and his wife, Amelia, who were in their 90s at the time. 10 architecture projects that prove black is the new black. Blackened wood is an ever-popular choice of material for architects in recent times. 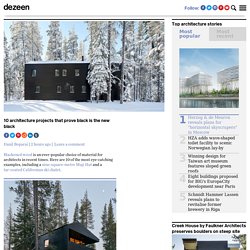 Here are 10 of the most eye-catching examples, including a nine-square-metre Muji Hut and a tar-coated Californian ski chalet. Troll Hus, USA by Mork-Ulnes Architects Mork-Ulnes Architects clad this five-bedroom ski cabin in California in tar-coated timber and placed it on a concrete plinth to protect it from hazardous weather. The project's name, "Troll Hus" plays on Scandinavian folklore, in which trolls are said to dwell in remote mountains. Find out more about Troll Hus › The Sleeve House, USA, by Actual/Office Architects. This Cool Bed is the Ultimate Piece of Multifunctional Furniture. We've all heard of a bed so comfortable you never want to leave, but what about a bed that's super functional? 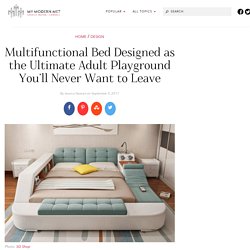 We've found the ultimate bed, one that not only looks cool, but is packed with ingenious design features to ensure you'll never want to leave. Sold across a wide variety of Asian retailers, this modular bed is fully customizable and has endless amounts of storage. Risko Drawing Desk by Digitalab for Viarco - Design Milk. Japanese Designer Creates Stylish Cat Furniture for a Minimalist Home. Different Types of Houses Around the World Showcase Different Lifestyles. Perfectly Preserved 1950s Time Capsule House Is For Sale. Feline Fine: Japanese Line of Miniature Modern Furniture Made for Cats. Cats are big in Japan. 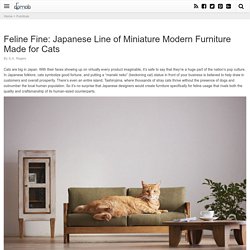 With their faces showing up on virtually every product imaginable, it’s safe to say that they’re a huge part of the nation’s pop culture. Spiraling Treetop Tower Offers Breathtaking Views of the Forest. Denmark-based design firm EFFEKT, unveils plans for a spiraling observation tower that is currently being built south of Copenhagen. Aimed to offer panoramic views across the surrounding forest of Gisselfeld Kloster, Haslev, the structure itself will seem one with its surroundings through the usage of wood from the local trees to comprise its lattice structure, as well as the implementation of Corten, a weathered type of steel that form a stable rust-like appearance. The 13-tiered hourglass-shaped tower will provide a new perspective that includes views of hilly landscape with lakes, wetlands, and creeks, in addition to an immersive experience from within and above the surrounding trees.

In addition, the walkway will integrate elements into the route for visitors to learn and interact with, while eventually concluding with the observation deck. This new development is part of Camp Adventure, an existing adventure sports facility that already include treetop climbing and aerial zip lines. Tato and Phorm combine Japanese and Australian design for Brisbane home. This hillside house in Brisbane, designed by Japanese studio Tato Architects and Australian office Phorm Architecture, features outdoor living spaces raised up on stilts. Lighting Design Studios You Should Know About. Abandoned Fishing Village in China Reclaimed by Nature. In the mouth of the Yangtze River off the eastern coast of China, a small island holds a secret haven lost to the forces of time and nature–an abandoned fishing village swallowed by dense layers of ivy slowly creeping over every brick and path.

Houtou Wan Village is located on Gouqi Island, which belongs to a group of 394 islands known as the Shengsi Islands in the Zhoushan Archipelago. It's one of many examples of small villages in China that have become ghost towns due to urbanization, inaccessibility, depletion of resources, and shifts in industry, among other factors. Once a thriving settlement merely half a century ago, Houtou Wan Village was gradually deserted when the small bay could no longer meet the needs of the increasing number of fishing boats. Above photo credit: Jane Qing Photo credit: Jane Qing Photo credit: Xie Yixuan Photo credit: Xie Yixuan Photo credit: 晴天下微笑的绿蓑衣 Photo credit: sccai6069. Indoor/Outdoor Living: Terraced Home in Vietnam Boasts 9 Balconies. Lázaro presents loft-style house in visuals that "go beyond hyper-realistic" These renderings by visualisation studio VER depict a board-marked concrete house with factory-like glazing, which Mexican architecture studio Lázaro is planning to build in the city of Uruapan.

The board-marked concrete structure, which Lázaro expects to begin building later this year, will be wedged between two existing buildings on a long and narrow site in the city's Magdalena neighbourhood. The front and back of Magdalena House will be bounded by patches of greenery, while expanses of gridded glazing will frame views out to a large mango tree already on the site. La Fabrica, Abandoned Factory Turned Architect's Dream. In 1973, architect Ricardo Bofill stumbled upon an abandoned cement factory outside of Barcelona.

This discovery would change his life, as the factory, known as La Fabrica, became the center of his professional and domestic life. 15 Of The Most Evil-Looking Buildings In The World. Architectural Sculptures by David Moreno Look Like Wild Pencil Sketches. Working with hundreds of steel rods and pieces of piano wire, Spanish artist David Moreno constructs unwieldy sculptures that look like 2D sketches. Usually centered around a structure or row of house-like buildings, each artwork is designed to look like a haphazard collection of sticks, perhaps something easily destroyed by a big bad wolf. Marc Yankus: The Secret Lives of Buildings. ©Marc Yankus, Flatiron Building. Scandinavia Has Green-Roofed Homes That Are Like Real-Life Hobbit Houses. Curb appeal: cozy exterior, extensive windows, and a green roof?