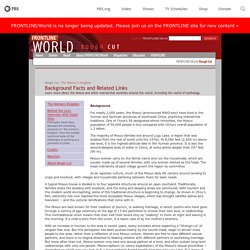 One of China's 56 designated ethnic minorities, the Mosuo population of 56,000 people is tiny compared with China's overall population of 1.3 billion. The majority of Mosuo families live around Lugu Lake, a region that was isolated from the rest of world until the 1970s. At 8,580 feet (2,600 m) above sea level, it is the highest-altitude lake in the Yunnan province. It is also the second-deepest body of water in China, at some points deeper than 297 feet (90 m). Mosuo women carry on the family name and run the households, which are usually made up of several families, with one woman elected as the head. As an agrarian culture, much of the Mosuo daily life centers around tending to crops and livestock, with villages and households bartering between them for basic needs. The best way to predict the future is to design it/la mejor manera de prognosticar el futuro es diseñarlo.

I started this blog in January of 2013 to maximize my health and productivity by eating more fresh fruit and vegetables. Please join me on this healthy journey. Tsdwlstandards - Spanish. Curriculum maps are a snapshot of the course. 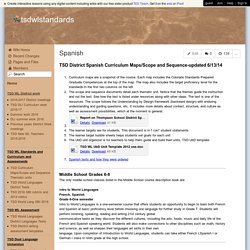 Each map includes the Colorado Standards Prepared Graduate Competences at the top of the map. The map also includes the target proficiency level for the standards in the first two columns on the left.The scope and sequence documents detail each thematic unit. Read to Speak Spanish. Filminute. Maestra’s Many Mutations of Mafia – La Maestra Loca. Can you tell I like alliteration? 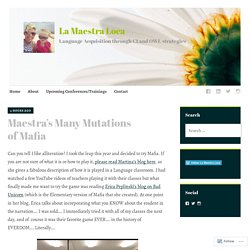 I took the leap this year and decided to try Mafia. If you are not sure of what it is or how to play it, please read Martina’s blog here, as she gives a fabulous description of how it is played in a Language classroom. I had watched a few YouTube videos of teachers playing it with their classes but what finally made me want to try the game was reading Erica Peplinski’s blog on Bad Unicorn (which is the Elementary version of Mafia that she created). 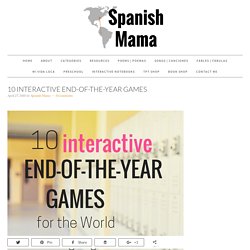 Everyone is tired, you have run out of ideas, testing has already been done, and more than one student is checked out. Here are some ideas that work with any unit or theme and put all the summer energy to constructive use. If you have a few weeks that need some fresh content, the BBC’s beginner’s Spanish series Mi Vida Loca is also a great option.

Comments. Latin Storybook Making Project - John P. Piazza, M.A. Why not put your students to work creating a FVR library for you? 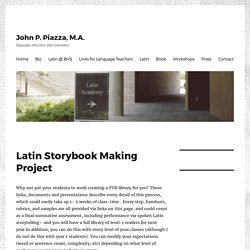 These links, documents and presentations describe every detail of this process, which could easily take up 1- 2 weeks of class-time . Every step, handouts, rubrics, and samples are all provided via links on this page. and could count as a final summative assessment, including performance via spoken Latin storytelling– and you will have a full library of level-1 readers for next year.In addition, you can do this with every level of your classes (although I do not do this with year 1 students). The AP Spanish Language and Culture Exam. Exam Day 2017 Tues, May 2, 8 a.m. 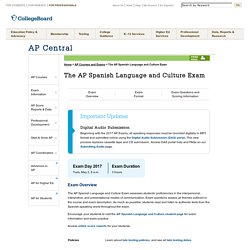 Exam Overview The AP Spanish Language and Culture Exam assesses students' proficiencies in the interpersonal, interpretive, and presentational modes of communication. Exam questions assess all themes outlined in the course and exam description. As much as possible, students read and listen to authentic texts from the Spanish-speaking world throughout the exam. Encourage your students to visit the AP Spanish Language and Culture student page for exam information and exam practice. Access online score reports for your students. Exam Format. ZUPER KIDS. TL;DW. 'Everyone is affected.' Immigration raids turn Oregon city into ghost town. WOODBURN -- Cesar Mora's customers disappeared in waves. 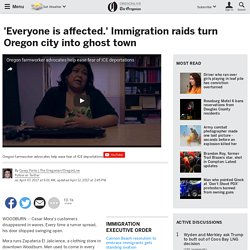 Every time a rumor spread, his door stopped swinging open. Mora runs Zapateria El Jalicience, a clothing store in downtown Woodburn. Men used to come in every Saturday to buy leather boots and cowboy hats for weekend parties. Then President Donald Trump signed an executive order beefing up immigration enforcement. Federal immigration agents detained 11 men at a Woodburn gas station, leaving workers afraid to go to their jobs and children terrified to attend school. A Town In Oregon Is Showing What Trump’s Immigration Policies Look Like IRL – we are mitú. Woodburn, Ore. is a rural, agricultural town that has a population of about 25,000. 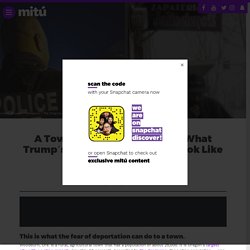 It is Oregon’s largest city with a Latino majority (roughly 60 percent). According to The Oregonian, the Latino population — one quarter of the Latinos there are undocumented — is what helps the town thrive. Luna profe: Canciones para aprender español: Despacito. Borderlands - Reviews. Difficulty rating: ★★★★✩ Tough CookieGenre: Documentary, NewsSummaryRadio Ambulante is a branch of NPR, a podcast produced in Spanish and focusing on primarily Latin American and Hispanophone countries' issues. 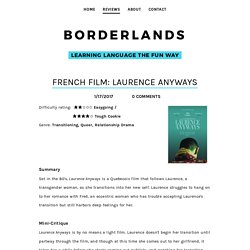 The podcast ranges in topic, covering everything from cuisine to immigration to beauty standards to historic wars.Mini-CritiqueAs an NPR junkie, I cannot deny my undying love for this show. Even though my Spanish skills do not allow me to understand around 60% of the dialogue, the 40% that I can understand is undoubtebly fantastic storytelling.

The hosts spiral in and out of the big and small picture, and their interview subjects are always relatable and interesting.

Spanish & Portuguese Studies. HuffPost. Word Chunk Team Game. 200 superb books everyone should read at least once. Story Listening: What is it? The latest buzz in the TPRS world is Story Listening, a method to “provide massive, meaningful comprehensible input” developed by Dr. 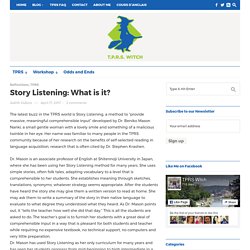 Beniko Mason Nanki, a small gentle woman with a lovely smile and something of a malicious twinkle in her eye. 9 Famous Faces On The Struggles And Beauty Of Being Afro-Latino. Home - Seeds of Learning.

In fact, this powerful search engine can offer lots of great services, apps and features that aren’t on many people’s radar. The Bright Side team will help you to uncover some of them. Here are 15 of the most useful Google apps that you probably didn’t know existed. Google Translate app is an application for those who like traveling. The perfect game – El juego perfecto – nataliaenriquericardo. Comunicación sencilla con pictogramas. Free Vintage Posters, Vintage Travel Posters, Printables. Venezuela. A Guide: Eight Tips for Traveling By Bus in Belize - San Pedro Scoop. 11 Books By Latinas Every Feminist Should Add To Their Collection.

Bien padre. Hispanoticias – Fans del Español. Make your own Spot It clone. URL Provided content. The spot it game you are viewing is populated via options provided in the URL. Carnaval. The great global food gap: Families around the world photographed with weekly shopping as they reveal cost ranges from £3.20 to £320.