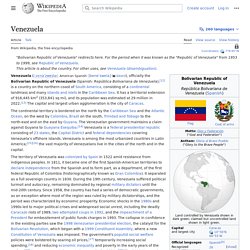 The capital and largest urban agglomeration is the city of Caracas. It has a territorial extension of 916,445 km2 (353,841 sq mi). The territory now known as Venezuela was colonized by Spain in 1522 amid resistance from indigenous peoples. Bolivarian Republic of Venezuela. 5/13/18 Venezuela: John Oliver. 4/2: Venezuelan yes-men to Maduro open door to prosecution of Guaido. 1/29/19: Venezuelan People's Choice Guaidó Controls U.S. Bank Accounts, State Dept (PDF) 1/27/19: Venezuela allows US diplomats to stay. (CARACAS, Venezuela) — Venezuela defused a potential showdown with the United States, suspending a demand that U.S. diplomats leave the country as Washington called on the world to “pick a side” in the South American nation’s fast-moving crisis. 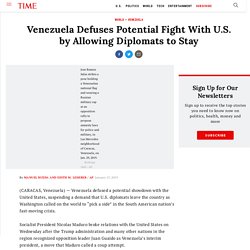 Socialist President Nicolas Maduro broke relations with the United States on Wednesday after the Trump administration and many other nations in the region recognized opposition leader Juan Guaido as Venezuela’s interim president, a move that Maduro called a coup attempt. Maduro gave U.S. diplomats three days to leave the country, but the Trump administration said it wouldn’t obey, arguing that Maduro is no longer Venezuela’s legitimate president.

That set the stage for a showdown at the hilltop U.S. 1/24/19: Venezuela crisis –How the political situation escalated. Image copyright AFP Venezuela's political crisis appears to be reaching boiling point amid growing efforts by the opposition to unseat the socialist president, Nicolás Maduro. 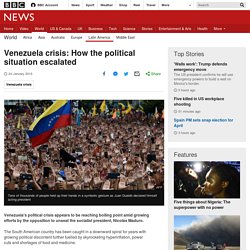 The South American country has been caught in a downward spiral for years with growing political discontent further fuelled by skyrocketing hyperinflation, power cuts and shortages of food and medicine. More than three million Venezuelans have left the country in recent years. But what exactly is behind the crisis rocking Venezuela? Who's the president? This would be an unusual question to ask in most countries, but in Venezuela many want to know exactly that following the dramatic events of 23 January. Image copyright Getty Images. 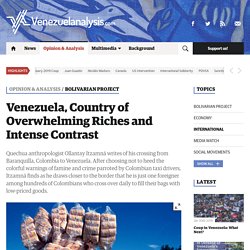 It’s the most violent city in the world. There’s no food over there- they don’t even have toilet paper. Those two communist governments ruined the whole country. 1/23/19: Colombian & Venezuelan Governments Work Together after Border Closes. Santa Elena, August 21st, 2015. 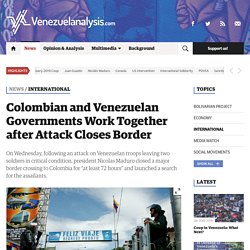 (venezuelanalysis.com)- On Wednesday, following an attack on Venezuelan troops leaving two soldiers in critical condition, president Nicolas Maduro closed a major border crossing to Colombia for “at least 72 hours” and launched a search for the assailants. Yesterday Colombia’s Foreign Minister Maria Angela Holguin told reporters her government respected Venezuela’s “sovereign decision” to close its border, and indicated that Colombia increased security in tandem, to prevent the criminals from crossing over. 8/25/18: Venezuela’s great socialist experiment brought a country to its knees. 1/27/18: Is Venezuela on the Brink of Economic & Social Collapse?

Venezuela is totally out of sync with most of Latin America and the Caribbean as it has headed in an increasingly autocratic direction politically, marked by stunningly inept economic mismanagement, reminiscent of Zimbabwe under Mugabe and the Congo under Mobuto. 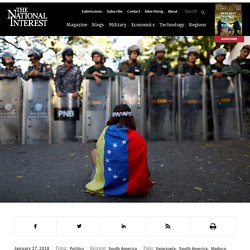 The problem is that as Venezuela sinks deeper into socioeconomic misery, many of its citizens are opting to leave. At the same time, the authoritarian regime continues to function as major conduit for illicit drugs in Latin America and the Caribbean, such is the need for cash among the Chavismo political elite. In a sense, the Venezuelan house is on fire and the neighbors are increasingly nervous of the spread of its problems into the region. Venezuela is a mess. 5/22/17: What you haven’t seen from Venezuela’s protests. 5/21/17: 200,000 Venezuelans march against President Maduro. 5/21/18: Venezuela election– Maduro wins 2nd term amid claims of vote rigging.

Media playback is unsupported on your device Venezuela's President Nicolás Maduro has won re-election to another six-year term, in a vote marred by an opposition boycott and claims of vote-rigging. 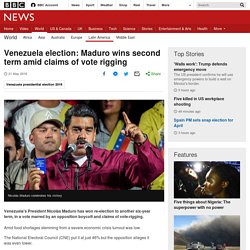 Amid food shortages stemming from a severe economic crisis turnout was low. The National Electoral Council (CNE) put it at just 46% but the opposition alleges it was even lower. Untitled. 5/9/16: The Pain of Watching Your Country Fall Apart. It’s a terrible thing to watch the country of your birth slowly tear itself apart in an unwavering death march. 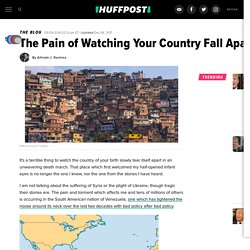 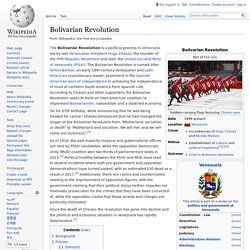 The Bolivarian Revolution is named after Simón Bolívar, an early 19th-century Venezuelan and Latin American revolutionary leader, prominent in the Spanish American wars of independence in achieving the independence of most of northern South America from Spanish rule. According to Chávez and other supporters, the Bolivarian Revolution seeks to build an inter-American coalition to implement Bolivarianism, nationalism and a state-led economy. On his 57th birthday, while announcing that he was being treated for cancer, Chávez announced that he had changed the slogan of the Bolivarian Revolution from "Motherland, socialism, or death" to "Motherland and socialism. We will live, and we will come out victorious".[4] Background[edit] Policies[edit] Domestic[edit] International[edit] 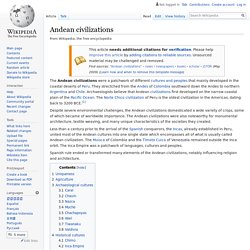 They strectched from the Andes of Colombia southward down the Andes to northern Argentina and Chile. Archaeologists believe that Andean civilizations first developed on the narrow coastal plain of the Pacific Ocean. The Norte Chico civilization of Peru is the oldest civilization in the Americas, dating back to 3200 BCE.[1] Despite severe environmental challenges, the Andean civilizations domesticated a wide variety of crops, some of which became of worldwide importance. The Andean civilizations were also noteworthy for monumental architecture, textile weaving, and many unique characteristics of the societies they created.

Caracazo. The Caracazo, or sacudón, is the name given to the wave of protests, riots, looting, shootings and massacres[6] that began on 27 February 1989 in Venezuela's capital, Caracas, and the surrounding towns. The weeklong clashes resulted in the deaths of hundreds of people, thousands by some accounts, mostly at the hands of security forces and the military.[4][7][8] The riots and the protests began mainly in response to the government's economic reforms and the resulting increase in the price of gasoline and transportation.[6] Etymology[edit] Caudillo. Contents Spanish American Caudillos[edit] Hugo Chávez. Hugo Rafael Chávez Frías (/ˈtʃævɛz/; Spanish: [ˈuɣo rafaˈel ˈt͡ʃaβes ˈfɾi.as]; 28 July 1954 – 5 March 2013) was a Venezuelan politician who was President of Venezuela from 1999 to 2013. Chávez was also leader of the Fifth Republic Movement political party from its foundation in 1997 until 2007, when it merged with several other parties to form the United Socialist Party of Venezuela (PSUV), which he led until 2012.

Born into a working-class family in Sabaneta, Barinas, Chávez became a career military officer, and after becoming dissatisfied with the Venezuelan political system based on the Puntofijo Pact,[1] he founded the clandestine Revolutionary Bolivarian Movement-200 (MBR-200) in the early 1980s. Chávez led the MBR-200 in an unsuccessful coup d'état against the Democratic Action government of President Carlos Andrés Pérez in 1992, for which he was imprisoned. Early life[edit] Hugo was born the second of seven children.[51][52] Hugo described his childhood as "poor...

Adopted in December 1999, it replaced the 1961 Constitution, the longest-serving in Venezuelan history.[2] It was primarily promoted by former President of Venezuela Hugo Chávez and thereafter received strong backing from diverse sectors, including figures involved in promulgating the 1961 constitution such as Luis Miquilena and Carlos Andrés Pérez. Chávez and his followers (chavistas) refer to the 1999 document as the "Constitución Bolivariana" (the "Bolivarian Constitution") because they assert that it is ideologically descended from the thinking and political philosophy of Simón Bolívar and Bolivarianism. Origins[edit] Gran Colombia. Gran Colombia (Spanish pronunciation: [ˈɡɾaŋ koˈlombja], "Great Colombia") is a name used today for the state that encompassed much of northern South America and part of southern Central America from 1819 to 1831. Guaicaipuro. Guaicaipuro (c. 1530–1568) was a native (indigenous) Venezuelan chief of both the Teques and Caracas tribes.

1992 Venezuelan coup d'état attempts. The Venezuelan coup attempts of 1992 were attempts to seize control of the government of Venezuela by the Hugo Chávez-led Revolutionary Bolivarian Movement-200. The first coup attempt took place on February 4, 1992, and was led by Chávez.[1] A second coup attempt on November 27, 1992, took place while Chávez was in prison but was directed by a group of young military officers who were loyal to the Revolutionary Bolivarian Movement-200.[1] The coups were directed against President Carlos Andrés Pérez and occurred in a period marked by neo-liberal economic reforms, which were attempted in order to decrease the country's level of indebtedness and had caused major protests and labour unrest.

1998 Venezuelan presidential election. The 1998 Venezuelan presidential election was held on 6 December 1998. The main candidates were Hugo Chávez, a career military officer who led a coup d'état against then-president Carlos Andrés Pérez in 1992; and former Carabobo Governor Henrique Salas Römer. 1999 Constituent National Assembly. Carlos Andrés Pérez. Carlos Andrés Pérez Rodríguez (27 October 1922 – 25 December 2010)[1] also known as CAP and often referred to as El Gocho (due to his Andean origins), was a Venezuelan politician, President of Venezuela from 12 March 1974 to 12 March 1979 and again from 2 February 1989 to 21 May 1993. His first presidency was known as the Saudi Venezuela due to its economic and social prosperity thanks to enormous income from petroleum exportation.