Untitled. Untitled. There is a difference between pop-flop and pop-fulfillment. 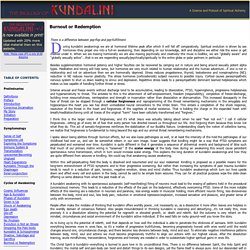 During kundalini awakenings we are at hormonal lifetime peak after which it will fall off comparatively. Spiritual evolution is driven by sex hormones--they propel one into a full-on awakening, then depending on our knowledge, skill and discipline we either ride the wave or get crashed under it. When we are maxing hormonally we are also maxing psychically and creatively--the muse is Godlike, we are "globally aware" and "globally sexually active"...that is we are responding sexually/psychically/spiritually to the entire globe or polar partners in particular.Besides supplementation hormonal potency and higher faculties can be recovered by camping out in nature and being around sexually potent alpha types. 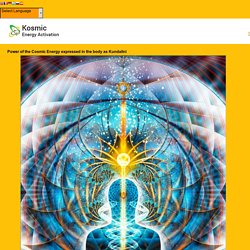 When it’s entering our bodies its move in our energy vortex –chakras, balancing them in the harmony vibrations of the universe, reaching its perfection as a highest point as Kundalini. Kundalini (Sanskrit: कुण्डलिनी kuṇḍalinī, “coiled one”), in the concept of Dharma, refers to a form of primal energy(or shakti) said to be located at the base of the spine. Holy Guardian Angel - The Relation Between The Spinal Cord With Human Energy and Kundalini Awakening. Sexual Kundalini, Tantra, and Creative Manifestation. Living with Kundalini – Bringing You Alive Again. By Open Contributing writer for Wake Up World Kundalini is the entirely natural phenomenon of life force — flowing ‘down’ from the source, into sentient life, animating it, and then connecting back to the source once more. 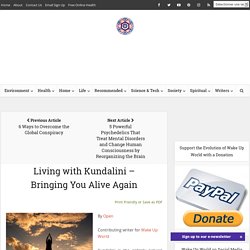 It’s like a circuit of electricity, and when you’re fully plugged into it, then it brings you fully alive. In society most have been disconnected from it, for a vast variety of reasons, from the processed foods that cause disharmonious internal vibrations, to electrosmog and distorted behaviourisms that cut across the natural flow. It leads to a lesser life-style, where you’re constantly searching for something but have forgotten exactly what it is you were originally looking for. Well, it’s time to come alive again!

Moving past small “I” identification When you’re plugged into Kundalini it’s like all the lights in the universe suddenly come on. So to benefit from activated kundalini in your life, you have to move progressively past such limited small “I” identification. The Acceleration of Kundalini in the 5D Shift. Activation of kundalini is often described as the release of pent up energy in the root chakra, which then rises through the other chakras, clearing and cleansing, before reuniting with soul consciousness flowing "down" from the source, through the dimensions, inside oneself. 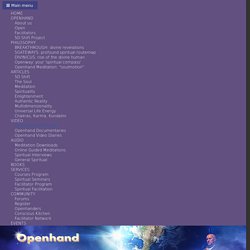 To us here at Openhand, free flowing kundlaini is the entirely natural state to live in. This free flowing source energy, creates miracles and magic all around you, feels like interconnected joy of living, and unfolds a path of light under your very feet. Kundalini Massage... Kunda\Kundalini Gland - AYP Public Forum. Kundalini in Religies en Spirituele Stromingen. Het woord Kundalini is afgeleid van een Sanskriet woord ‘Kundal’, dat opgerold betekent. 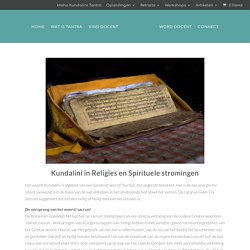 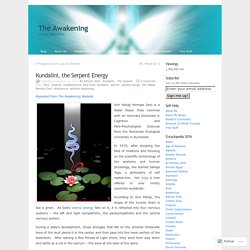 In 1970, after studying the field of medicine and focusing on the scientific terminology of the anatomy and human physiology, she started Sahaja Yoga, a philosophy of self realiza-tion. Her yoga is now offered in over ninety countries worldwide. According to Shri Mataji, the shape of the human brain is like a prism. MAHA KUNDALINI TANTRA – SAY YES TO LIFE. Pitfalls on the Spiritual Road. By Marja S In Swedish please! 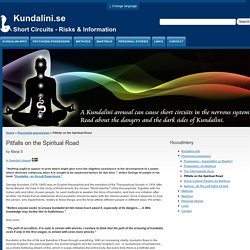 "Nothing ought to appear in print which might give even the slightest assistance in the development of a power which destroys ruthlessly when it is sought to be awakened before its due time. ", writes George Arundale in his book "Kundalini - an Occult Experience. " George Arundale (1878-1945) was an English theosophist and the president of the Theosophical Society in 1934 after Annie Besant.

"Before anyone seeks to arouse kundalini let him know much about it, especially of its dangers..... And more: Kundalini – the cosmic serpent – AyaScend. “Inside every human being there is a hidden divine cosmic energy – Kundalini Shakti. 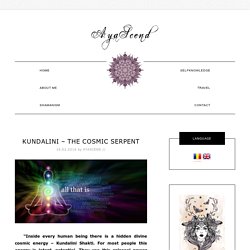 For most people this energy is latent, potential. They use this colossal power given to them by the nature very rarely and mostly by accident. For this reason, these people live a lifetime without being curious to discover, to know their own capabilities, availability and inner tendencies.” – PREMA – Awakening and rising of Kundalini.