Whatever You Do, Don't Mix Up Your Partners - -PageTurner- You shouldn't see this! If you can see this text that means that you, your computer, or your network is blocking access to the FetLife subdomains. We have seen an increase in this recently. Here are some resources you can use to help resolve the problem: Skip to main content. "But what if they test positive?" - Poly.Land. “But aren’t you worried about diseases?” 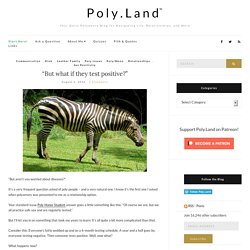 FetLife. Having Multiple Devoted Boyfriends Is Wonderful, Polyandrous Women Confirm. Many women may casually date multiple guys, but some modern-day women are practicing polyandry: having multiple husbands (or, in a contemporary, repurposed definition, several serious or life-long partners). 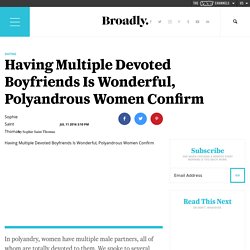 Polyandry, the female-focused version of polygamy, is technically illegal in the United States; thus, those who practice it do so without literally getting married. Why I say “non-primary,” not “secondary” I’m a writer and editor by profession, so I choose words carefully. 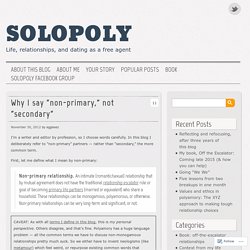 In this blog I deliberately refer to “non-primary” partners — rather than “secondary,” the more common term. ​I Grew Up in a Polyamorous Household - VICE. Few cultural symbols have as much heft as the "traditional" nuclear family. 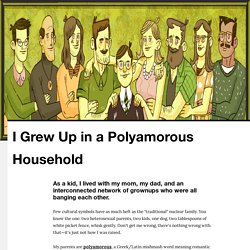 You know the one: two heterosexual parents, two kids, one dog, two tablespoons of white picket fence, whisk gently. FetLife. Going Poly — Some life lessons from 2016. - A brief overview of what a Unicorn can be in a... Finally Home — Polyamory can bring: immense joy and dizzying... Poly-Architecture 101: Building Hierarchies « Slut, Ph.D. It is one of the most often misunderstood truisms of hierarchical polyamory that stable and highly functioning primary relationships are essential for successful (hierarchical) poly life. 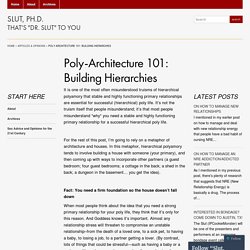 It’s not the truism itself that people misunderstand; it’s that most people misunderstand *why* you need a stable and highly functioning primary relationship for a successful hierarchical poly life. For the rest of this post, I’m going to rely on a metaphor of architecture and houses. In this metaphor, hierarchical polyamory tends to involve building a house with someone (your primary), and then coming up with ways to incorporate other partners (a guest bedroom; four guest bedrooms; a cottage in the back; a shed in the back; a dungeon in the basement… you get the idea). Fact: You need a firm foundation so the house doesn’t fall down. Resources and Information on Polyamory and Non-Monogamy. Login - FetLife. Polyamory FAQ - More Than Two. Religious Attitudes Towards Polyamory.

Among organized religions, attitudes towards polyamory vary from extreme discomfort and distaste to complete acceptance. 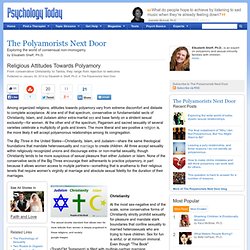 At one end of that spectrum, conservative or fundamentalist sects of Christianity, Islam, and Judaism abhor extra-marital sex and base family on a strident sexual exclusivity—for women. At the other end of the spectrum, Paganism and sacred sexuality of several varieties celebrate a multiplicity of gods and lovers. The more liberal and sex-positive a religion is, the more likely it will accept polyamorous relationships among its congregation.

The Big Three in the United States—Christianity, Islam, and Judaism—share the same theological foundations that mandate heterosexuality and marriage to create children. All three accept sexuality within religiously recognized unions and discourage extra- or non-marital sexuality, though Christianity tends to be more suspicious of sexual pleasure than either Judaism or Islam. Christianity Islam. What’s a metamour? On my terms. The “metamour” concept is like the vase in this picture. 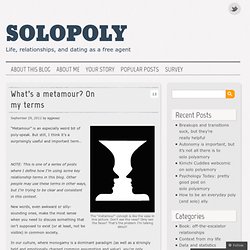 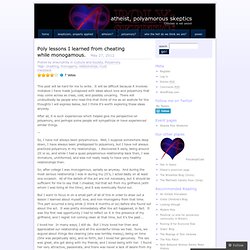 Tags: cheating, monogamy, relationships, trust trackback This post will be hard for me to write. It will be difficult because it involves mistakes I have made juxtaposed with ideas about love and polyamory that may come across as crass, cold, and possibly uncaring. Study looks at evolutionary origins of monogamous coupling. The roots of the modern family — monogamous coupling — lie somewhere in our distant evolutionary past, but scientists disagree on how it first evolved. 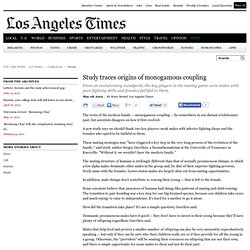 A new study says we should thank two key players: weak males with inferior fighting chops and the females who opted to be faithful to them. These mating strategies may "have triggered a key step in the very long process of the evolution of the family," said study author Sergey Gavrilets, a biomathematician at the University of Tennessee in Knoxville. "Without it, we wouldn't have the modern family. " The mating structure of humans is strikingly different than that of sexually promiscuous chimps, in which a few alpha males dominate other males in the group and, by dint of their superior fighting prowess, freely mate with the females. Lower-status males are largely shut out from mating opportunities. In addition, male chimps don't contribute to rearing their young — that is left to the female. How did the transition take place?