Am I Passive-Aggressive? Signs You're Using Passive Aggression to Cope. Confronting difficult emotions like anger, sadness, and disappointment can be painful. 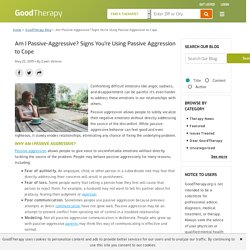 It’s even harder to address those emotions in our relationships with others. Passive aggression allows people to subtly vocalize their negative emotions without directly addressing the source of the discomfort. While passive-aggressive behavior can feel good and even righteous, it slowly erodes relationships, eliminating any chance of fixing the underlying problem. Why Am I Passive Aggressive? Passive aggression allows people to give voice to uncomfortable emotions without directly tackling the source of the problem. Fear of authority. 17 Signs You're a Passive-Aggressive Person. We’ve all thought about leaving sticky notes around the house or office with comments like, “Has anybody here ever heard of washing dishes?” 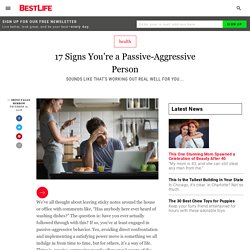 The question is: have you ever actually followed through with this? If so, you’ve at least engaged in passive-aggressive behavior. 7 Signs You're Being Passive Aggressive. Is your inner “Mean Girl” making appearances at work? 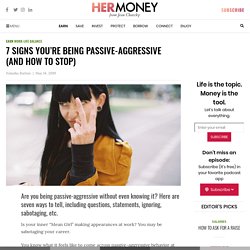 You may be sabotaging your career. Victoria Sullivan LPC, TA, Mental Health Counseling in Rogers, Arkansas, 72758. My Approach to Helping. 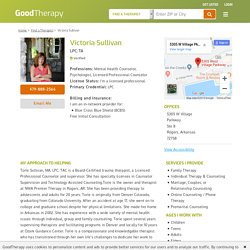 Carmen Cubillo LPC, LMFT, EMDR, in Fayetteville, Arkansas, 72701. My Approach to Helping How does loving my work help you as a client? 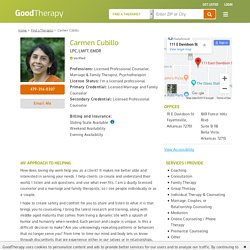 It makes me better able and interested in serving your needs. I help clients co-create and understand their world, I listen and ask questions, and use what ever fits. Anne Marie Frost MS, LPC, Mental Health Counseling in Springfield, Missouri, 65804. Hi! 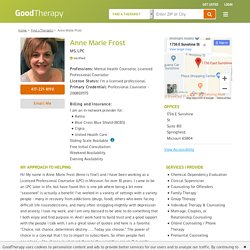 My name is Anne Marie Frost (Anne is fine!) And I have been working as a Licensed Professional Counselor (LPC) in Missouri for over 10 years. I came to be an LPC later in life, but have found this is one job where being a bit more "seasoned" is actually a benefit! Relationship With A Vulnerable Narcissist. The inflated image they project masks an underlying insecurity. 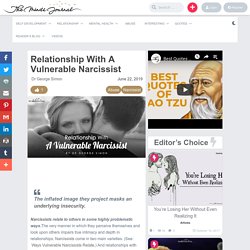 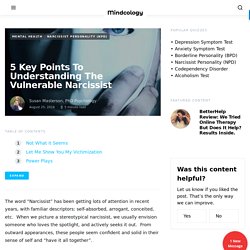 When we picture a stereotypical narcissist, we usually envision someone who loves the spotlight, and actively seeks it out. From outward appearances, these people seem confident and solid in their sense of self and “have it all together”. Not What it Seems. Vulnerable Narcissism: A Step-by-Step Guide. Not only has social media become the primary way to keep in touch with family and friends, it has also become a window into others’ lives. 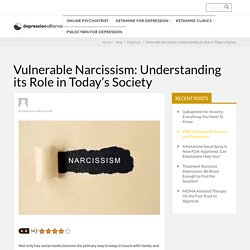 Social media allows us to see inside the minds of friends, family, and celebrities. However, part of this stripping of barriers is the rise of vulnerable narcissism. The Secret Façade of the Vulnerable Narcissist. At first, they seem so quiet and unobtrusive; a refreshing break from the normal banter of one-up-man-ship that frequently dominates an initial conversation. 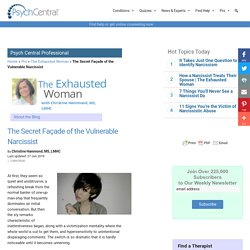 Discuss – The Exhausted Woman. The Exhausted Woman. Vulnerable Narcissism: The Less Obvious Narcissist - Thrivetalk. Vulnerable Narcissism: The Less Obvious Narcissist 3.1 (62.4%) 25 votes The easiest starting point to understand vulnerable narcissism is the origin of the term “Narcissist”. A New Way To Understand And Treat Depression. Depression is pervasive: In 2015, about 16 million — or 6.7 percent of — American adults had a major depressive episode in the past year. Major depression takes the most years off of American lives and accounts for the most years lived with disability of any mental or behavioral disorder. It is also expensive: From 1999 to 2012, the percentage of Americans on antidepressants rose from an estimated 6.8 to 12 percent.

The global depression drug market is slated to be worth over $16 billion by 2020. Trauma and Co-Dependency - The Ranch. Codependency is a dysfunctional relationship dynamic in which one person’s needs are secondary to another’s. Typically, codependency occurs when true intimacy does not. It is commonly developed in relationships with an addicted individual, but also develops in other relationships with people who are somehow emotionally unavailable. Relationships in which there is some type of traumatic bond, such as those involving physical, sexual or emotional abuse, can also create codependency in the victim.

Relationship Dynamics. 9 Signs of Traumatic Bonding: “Bonded to the abuser” What do you know about child abuse? What should you know about child abuse? Did you know that abuse is one of the most traumatizing events that a child could experience? For many children, abuse is unexpected and their ability to cope is often disproportionate to the abuse. Trauma is often defined as a terrible event that outweighs a child’s ability to cope (National Child Traumatic Stress Network, 2015). Trauma Bonding, Codependency & Toxic Relationships. Breaking the Codependency Myth: The Power of the Trauma Bond. The 2 Main Types Of Narcissism — And How To Spot The Difference. Surviving the Narcissist - The Path Forward.

The 2 Main Types Of Narcissism — And How To Spot The Difference. The Opposite of Addiction is Connection.