Emma Swift. Queen Jane Approximately. Banjo. Learn 4 Chords - Quickly Play Hundreds of Songs! [EASY VERSION] Tongue Drum. Tonto's Expanding Head Band - Zero Time (Full Album) Retuning of a vintage German Zither (Markneukirchen) Selling England By The Pound Reissues Interview 2007. Lyrics tmp. Mike Harding 11 The July Wakes. Cover The Beatles "While My Guitar Gently Weeps" by MonaLisa Twins. Into My Arms, Nick Cave, piano part easy. Play 500 Songs in 10 Minutes per Song! In the Correct Key!! Learn 4 Easy Chords to Quickly Play Thousands of Songs! Martha, Tom Waits, easy piano. Tom Waits - Grapefruit Moon (Karaoke) What Makes This Song Great? Ep.27 Peter Gabriel. Pete Atkin:Ballad Of An Upstairs Window Lyrics - LyricWikia - Wikia. Atkin I was going to the pictures with my girl at 7.30, got there first and started queueing on my ownBy 9.15 she still had not arrived and so I walked around the block and then I thought I'd telephone I let the phone keep ringing for ten minutes perhaps a quarter of an hour then concludedshe's not homeI thought I'd walk around the block again but soon got fed up wandering aimlessly aroundall on my own It was then the thought occurred to me she might have been there all the time just let the phone keep ringing on its ownIn order that I might be led to think that she'd gone out or for some other reason wasn't there at home Now if for any reason this should prove to be the case I couldn't help but wonder what the cause might bePerhaps her budgie Goldie had escaped out of the window but in any case I thought I'd go and see. 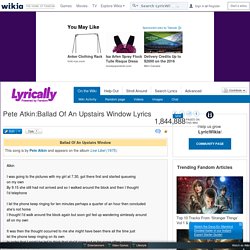 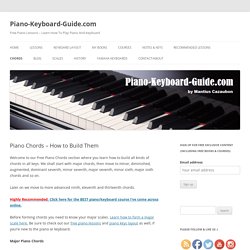 Minor Piano Chords Major and minor chords are called triads. St Albans Cathedral Tribute to David Bowie - St Albans Cathedral. Pogo. New Frank Zappa Doc Wows at Sundance 2016. It would be somewhat easy to do a straightforward documentary on Frank Zappa: zoom in on some grainy B&W pictures of him as an R&B-loving teen; chart his rise from Sixties avant-rock bandleader to symphonic composer, from antiestablishment iconoclast to anticensorship activist; interview some of the dozens, if not hundreds, of musicians inspired by him; drop in a few nuggets of We're Only In It for the Money or 200 Motels–era concert footage. 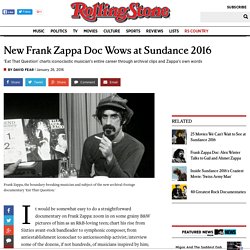 Of course, Zappa was never one to do anything the easy, or easily comprehensible, way — we're talking about an artist who composed a concerto for two bicycles and railed against the norm at every opportunity. Better, then, to honor his life and work with a jagged, collage-like assembly of archival footage. And, given the eloquence and biting wit he displayed in his lyrics, Congressional testimonies and conversations, to let the man speak for himself.