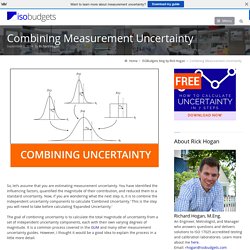 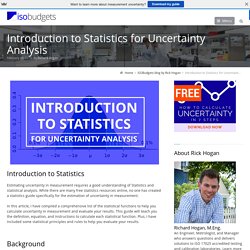 While there are many free statistics resources online, no one has created a statistics guide specifically for the estimation of uncertainty in measurement. In this article, I have compiled a comprehensive list of the statistical functions to help you calculate uncertainty in measurement and evaluate your results. This guide will teach you the definition, equation, and instructions to calculate each statistical function. Online Statistics Education: A Free Resource for Introductory Statistics. Developed by Rice University (Lead Developer), University of Houston Clear Lake, and Tufts University OnlineStatBook Project Home This work is in the public domain. 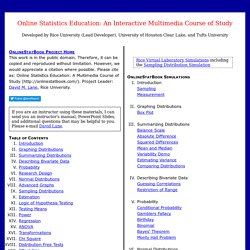 Therefore, it can be copied and reproduced without limitation. Bootstrapping (statistics) It may also be used for constructing hypothesis tests. 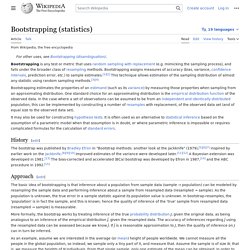 It is often used as an alternative to statistical inference based on the assumption of a parametric model when that assumption is in doubt, or where parametric inference is impossible or requires complicated formulas for the calculation of standard errors. The bootstrap was published by Bradley Efron in "Bootstrap methods: another look at the jackknife" (1979).[5][6][7] It was inspired by earlier work on the jackknife.[8][9][10] Improved estimates of the variance were developed later.[11][12] A Bayesian extension was developed in 1981.[13] The bias-corrected and accelerated (BCa) bootstrap was developed by Efron in 1987,[14] and the ABC procedure in 1992.[15] The basic idea of bootstrapping is that inference about a population from sample data (sample → population) can be modeled by resampling the sample data and performing inference on (resample → sample). For regression problems, various other alternatives are available.[19] Online Statistics Education: A Free Resource for Introductory Statistics.

Data Perspective: Introduction to Logistic Regression with R. In my previous blog I have explained about linear regression. 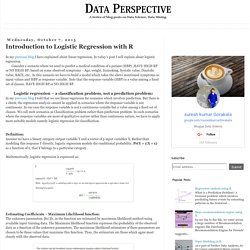 In today’s post I will explain about logistic regression. Consider a scenario where we need to predict a medical condition of a patient (HBP) ,HAVE HIGH BP or NO HIGH BP, based on some observed symptoms – Age, weight, Issmoking, Systolic value, Diastolic value, RACE, etc.. In this scenario we have to build a model which takes the above mentioned symptoms as input values and HBP as response variable.

Median. In a sample of data, or a finite population, there may be no member of the sample whose value is identical to the median (in the case of an even sample size); if there is such a member, there may be more than one so that the median may not uniquely identify a sample member. 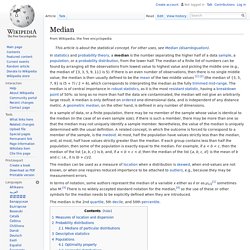 Nonetheless, the value of the median is uniquely determined with the usual definition. A related concept, in which the outcome is forced to correspond to a member of the sample, is the medoid. At most, half the population have values strictly less than the median, and, at most, half have values strictly greater than the median. Mean. For a broader coverage related to this topic, see average. 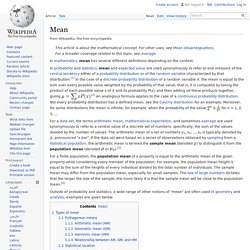 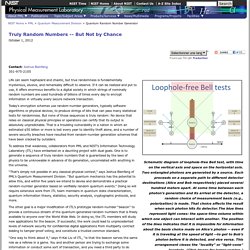 If it can be realized and put to use, it offers enormous benefits to a digital society in which strings of nominally random numbers are used hundreds of billions of times every day to encrypt information in virtually every secure network transaction. Today’s encryption schemes use random-number generators, typically software algorithms or physical devices, to produce strings of bits that can pass many statistical tests for randomness. Statistics A-B-C - Eurostat. List of Free Statistical Software. Data. Benford Online Bibliography. 100+ Interesting Data Sets for Statistics. Summary: Looking for interesting data sets? 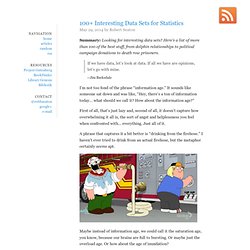 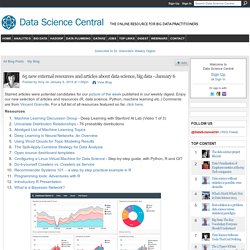 Statistical Shortcomings in Standard Math Libraries (And How To Fix Them) By Evan Miller June 8, 2014 Summary: Basic statistical analysis requires special mathematical functions which almost no standard math libraries implement. StatKey. StatKey to accompany Statistics: Unlocking the Power of Data by Lock, Lock, Lock, Lock, and Lock Help Presentation Mode StatKey v. 0.3.12 is written in JavaScript and should work well with any current browser including Chrome, Firefox, Safari, Opera, and IE. Comments, feedback, and bug reports can be sent to lock5stat@gmail.com. Filtering the world's information. World Database of Happiness. Are you an Introvert or Extrovert? Statistics for Hackers. Statistics Explained. Meta-analysis. Introducing Probability. (This article was originally published at Learn and Teach Statistics and Operations Research, and syndicated at StatsBlogs.)

I have a guilty secret. I really love probability problems. R Statistical Software. Tutorial: How to detect spurious correlations, and how to find the real ones. Specifically designed in the context of big data in our research lab, the new and simple strong correlation synthetic metric proposed in this article should be used, whenever you want to check if there is a real association between two variables, especially in large-scale automated data science or machine learning projects. Use this new metric now, to avoid being accused of reckless data science and even being sued for wrongful analytic practice. In this paper, the traditional correlation is referred to as the weak correlation, as it captures only a small part of the association between two variables: weak correlation results in capturing spurious correlations and predictive modeling deficiencies, even with as few as 100 variables.

The timeline of statistics. ‘Study the past if you would define the future’ - Confucius. P-Values. 4.2 Model Selection Viewed As Search. Understanding the behavior of model selection tools is easiest when the model selection techniques are viewed as search techniques. The search space consists of possible subsets of predictor variables. The Birthday Simulation. Spurious Correlations. Statistics. Chaos, chance and money. December 2008. The law of near enough. No coincidence? Statistics and the outrageously unlikely. Focusing on the specific makes us less likely to see true probability (Image: Valentine Vermeil/Picturetank) The Laws of the Improbability Principle. The Law of Selection. The Improbability Principle.