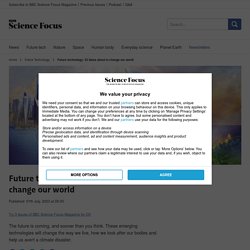 Researchers led by Washington University in St Louis, in Missouri, US, have developed a method that can turn the cheap and widely available building material into “smart bricks” that can store energy like a battery. A teen scientist's invention to help wounds heal. Teens Grow Food Using Bacteria. Science News - Latest Scientific Discoveries. The art of innovation. MIT Technology Review. Practical and affordable ways to capture carbon dioxide from the air can soak up excess greenhouse-gas emissions. 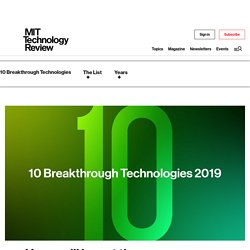 Even if we slow carbon dioxide emissions, the warming effect of the greenhouse gas can persist for thousands of years. To prevent a dangerous rise in temperatures, the UN’s climate panel now concludes, the world will need to remove as much as 1 trillion tons of carbon dioxide from the atmosphere this century. In a surprise finding last summer, Harvard climate scientist David Keith calculated that machines could, in theory, pull this off for less than $100 a ton, through an approach known as direct air capture.

7 BEST INVENTIONS OF 2019. 6 Ways Social Media Changed the Way We Communicate. What does art tell us about the way we see the world? To a large extent, art has a momentum of its own, and moves forward just as a result of new artists introducing new concepts and techniques to the art world, or as a result of new media being used to express their ideas. 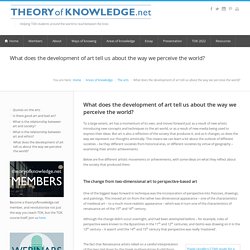 But art is also a reflection of the society that produces it, and as it changes, so does the way we represent our thoughts artistically. This means we can learn a lot about the outlook of different societies – be they different societies from historical eras, or different societies by virtue of geography – examining their artistic achievements. Below are five different artistic movements or achievements, with some ideas on what they reflect about the society that produced them. The change from two-dimensional art to perspective-based art. Our Love Affair With Digital Is Over. A decade ago I bought my first smartphone, a clunky little BlackBerry 8830 that came in a sleek black leather sheath.

I loved that phone. I loved the way it effortlessly slid in and out of its case, loved the soft purr it emitted when an email came in, loved the silent whoosh of its trackball as I played Brick Breaker on the subway and the feel of its baby keys clicking under my fat thumbs. How Does Technology Affect Teens? – NHSPress. How often do you find yourself using technology? 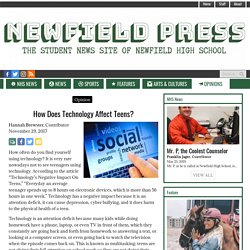 It is very rare nowadays not to see teenagers using technology. According to the article “Technology’s Negative Impact On Teens,” “Everyday an average teenager spends up to 8 hours on electronic devices, which is more than 56 hours in one week.” The Guardian view on children and social media: a safeguarding failure by the state. The Big Myth About Teenage Anxiety. We hear a lot these days that modern digital technology is rewiring the brains of our teenagers, making them anxious, worried and unable to focus. 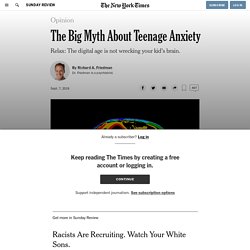 Don’t panic; things are really not this dire. Despite news reports to the contrary, there is little evidence of an epidemic of anxiety disorders in teenagers. This is for the simple reason that the last comprehensive and representative survey of psychiatric disorders among American youth was conducted more than a decade ago, according to Kathleen Ries Merikangas, chief of the Genetic Epidemiology Research Branch at the National Institute of Mental Health. There are a few surveys reporting increased anxiety in adolescents, but these are based on self-reported measures — from kids or their parents — which tend to overestimate the rates of disorders because they detect mild symptoms, not clinically significant syndromes. 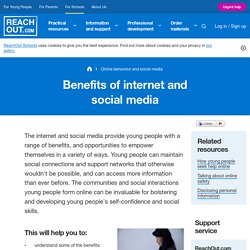 Young people can maintain social connections and support networks that otherwise wouldn't be possible, and can access more information than ever before. The communities and social interactions young people form online can be invaluable for bolstering and developing young people's self-confidence and social skills. The use of social media and networking services such as Facebook, Twitter, Instagram and Snapchat have become an integral part of Australians’ daily lives. Teenagers and social networking – it might actually be good for them. I ask a teenage girl, how often do you text? 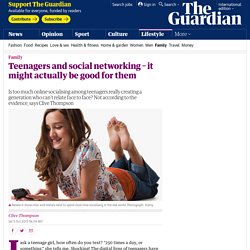 "250 times a day, or something," she tells me. Shocking! The digital lives of teenagers have become the target of weekly attacks. In a recent essay for the Guardian, the novelist Jonathan Franzen bemoaned online socialising, arguing that it was creating a uniquely shallow and trivial culture, making kids unable to socialise face to face. Beyond bionics: how the future of prosthetics is redefining humanity – video. A Love Story. BAT EYES: WB Yeats and the power of poetry. Look Up From Anti-social Social Network. Can We Auto-Correct Humanity? Designer babies: an ethical horror waiting to happen?

Comfortably seated in the fertility clinic with Vivaldi playing softly in the background, you and your partner are brought coffee and a folder. 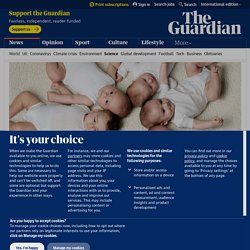 Inside the folder is an embryo menu. Each embryo has a description, something like this: Embryo 78 – male• No serious early onset diseases, but a carrier for phenylketonuria (a metabolic malfunction that can cause behavioural and mental disorders. Carriers just have one copy of the gene, so don’t get the condition themselves).• Higher than average risk of type 2 diabetes and colon cancer.• Lower than average risk of asthma and autism.• Dark eyes, light brown hair, male pattern baldness.• 40% chance of coming in the top half in SAT tests.