David Harvey Reviews Piketty's Capital in the 21st Century. David Harvey Thomas Piketty has written a book called Capital that has caused quite a stir. 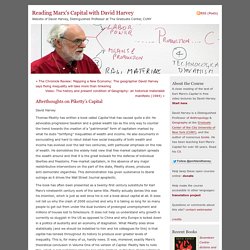 He advocates progressive taxation and a global wealth tax as the only way to counter the trend towards the creation of a “patrimonial” form of capitalism marked by what he dubs “terrifying” inequalities of wealth and income. He also documents in excruciating and hard to rebut detail how social inequality of both wealth and income has evolved over the last two centuries, with particular emphasis on the role of wealth. He demolishes the widely-held view that free market capitalism spreads the wealth around and that it is the great bulwark for the defense of individual liberties and freedoms. Free-market capitalism, in the absence of any major redistributive interventions on the part of the state, Piketty shows, produces anti-democratic oligarchies.

The book has often been presented as a twenty-first century substitute for Karl Marx’s nineteenth century work of the same title. The Economist explains: Thomas Piketty’s “Capital”, summarised in four paragraphs. It is the economics book that took the world by storm. 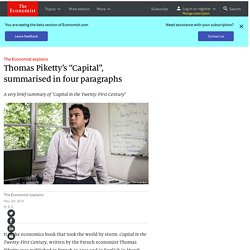 Capital in the Twenty-First Century, written by the French economist Thomas Piketty, was published in French in 2013 and in English in March 2014. The English version quickly became an unlikely bestseller, and it prompted a broad and energetic debate on the book’s subject: the outlook for global inequality. Some reckon it heralds or may itself cause a pronounced shift in the focus of economic policy, toward distributional questions. The Economist hailed Professor Piketty as "the modern Marx" (Karl, that is). But what is his book all about? Capital draws on more than a decade of research by Piketty and a handful of other economists, detailing historical changes in the concentration of income and wealth. From this history, Piketty derives a grand theory of capital and inequality.

The book has unsurprisingly attracted plenty of criticism. Update: This blog post has been amended to remove the news peg. Paper-reading.pdf. Young Minds in Critical Condition. The Stone is a forum for contemporary philosophers and other thinkers on issues both timely and timeless. 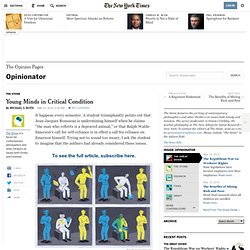 It happens every semester. A student triumphantly points out that Jean-Jacques Rousseau is undermining himself when he claims “the man who reflects is a depraved animal,” or that Ralph Waldo Emerson’s call for self-reliance is in effect a call for reliance on Emerson himself. Trying not to sound too weary, I ask the student to imagine that the authors had already considered these issues. Instead of trying to find mistakes in the texts, I suggest we take the point of view that our authors created these apparent “contradictions” in order to get readers like us to ponder more interesting questions. How do we think about inequality and learning, for example, or how can we stand on our own feet while being open to inspiration from the world around us? Our best college students are very good at being critical. State Rainwater Harvesting Statues, Programs and Legislation. Record droughts and water-supply worries have served as catalysts for state legislatures to consider legislation legalizing the catchment and use of rainwater for use in households and for lawns. 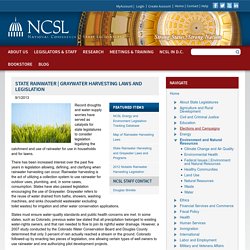 There has been increased interest over the past five years in legislation allowing, defining, and clarifying when rainwater harvesting can occur. Rainwater harvesting is the act of utilizing a collection system to use rainwater for outdoor uses, plumbing, and, in some cases, consumption. States have also passed legislation encouraging the use of Graywater. Russia Breaks 'Zero Waste' Sochi Olympic Pledge.

AKHSHTYR, Russia -- Trucks rumble to the edge of a gigantic pit filled with spray cans, tires and foam sheets and dump a stream of concrete slabs that send up a cloud of limestone dust. 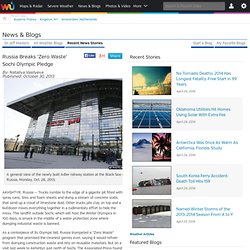 Other trucks pile clay on top and a bulldozer mixes everything together in a rudimentary effort to hide the mess. This landfill outside Sochi, which will host the Winter Olympics in 100 days, is smack in the middle of a water protection zone where dumping industrial waste is banned. As a centerpiece of its Olympic bid, Russia trumpeted a "Zero Waste" program that promised the cleanest games ever, saying it would refrain from dumping construction waste and rely on reusable materials. Lords of the Animals _ The Gatherers from the Sky. Muslim Women of Minang. Asparagus! stalking the american life. (6 minute trailer) For 30 years, Oceana County Michigan has been the Asparagus Capital of the World. 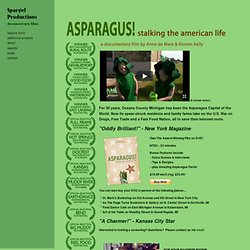 Now its spear-struck residents and family farms take on the U.S. War on Drugs, Free Trade and a Fast Food Nation, all to save their beloved roots. "Oddly Brilliant! " - New York Magazine Own The Award-Winning Film on DVD! NTSC • 53 minutes.