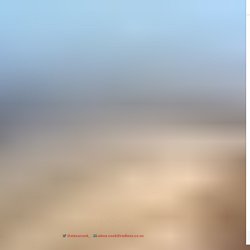 No time to read? Listen here instead The Kutarere Marae holds the tribe of Upokorehe and is nestled beside a stream at the top of the Ohiwa Harbour near Whakatane. Council removes embarassing dairy farm pollution data. Nitrogen cycle in the soil. Howard williams 2013 Diffuse pollution and freshwater degradation. Nutrient overloading. Nutrients in waterways are essential for the growth of algae and aquatic plants but too much can destroy an ecosystem. 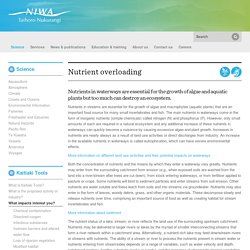 Nutrients in streams are essential for the growth of algae and macrophytes (aquatic plants) that are an important food source for many small invertebrates and fish. The main nutrients in waterways come in the form of inorganic nutrients (simple chemicals) called nitrogen (N) and phosphorus (P). However, only small amounts of each are required in a natural ecosystem and any additional increase of these nutrients in waterways can quickly become a nuisance by causing excessive algae and plant growth.

Increases in nutrients are nearly always as a result of land use activities or direct discharges from industry. An increase in the available nutrients in waterways is called eutrophication, which can have severe environmental effects. 100% Pure Fantasy? Living up to our brand. This week, Prime Minister John Key compared New Zealand's global "100% Pure" tourism marketing campaign to a fast food ad. 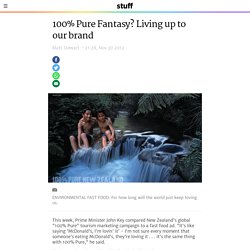 "It's like saying 'McDonald's, I'm lovin' it' - I'm not sure every moment that someone's eating McDonald's, they're loving it . . . it's the same thing with 100% Pure," he said. "It's got to be taken with a bit of a pinch of salt. " Mr Key, who is also the tourism minister, made the claim amid the fallout from criticism by Massey University freshwater ecologist Mike Joy, who told The New York Times-owned International Herald Tribune that New Zealand's clean, green global image was fast becoming divorced from ecological fact. A committed environmentalist, Dr Joy has been sounding the alarm over the nation's environmental woes for years, but when his two-month-old quotes went to print in the Tribune and online in The New York Times on November 16, the runoff really hit the river. Sackur confronted the prime minister with Dr Joy's research-based rigour.

Myths of intensification – Freshwater for Life. There have been many excuses given for the uncontrolled agricultural intensification to persuade New Zealander’s to believe that expansion and intensification, particularly of dairy farming, is required for our economic prosperity. 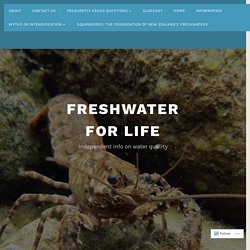 Dairy farming has been hailed and revered as an essential industry that we cannot do without. There has been little acknowledgement within the industry of the extensive environmental impacts that are closely correlated with dairy expansion and intensification. These are some of the myths we often hear to allow the continuing of dairy intensification. We give insight into some reasons why these myths just aren’t true. It’s time for more diversified farming systems in New Zealand. Myth: We’ll lose money if farmers have to lower their environmental impacts. Constructed Wetlands. Nutrient, Pasture & Herd Management: Free Video and related media - Mashpedia Player. Taonga by the tapful. Clutha-Southland Greens candidate Rachael Goldsmith saya Waituna Lagoon has had the biggest exposure but there are many other spots around our region where it is almost too late. 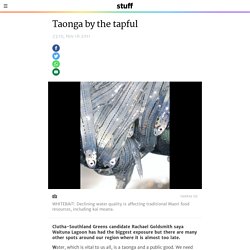 Water, which is vital to us all, is a taonga and a public good. We need to protect it and value it as an important life source for all ecosystems and to ensure the survival of all life, including animals and humans. Water quality in Southland is an issue dear to the Green Party's heart and it wasn't a surprise to us that it's dear to yours too. Our Invercargill candidate, Dave Kennedy, has written an overview of our stance on the terrible state of Southland waterways. I want to add to that by discussing the effects on us as a people and to local iwi. I am a Pakeha woman married into a Maori family and I have two children, both of Maori heritage. It's hard to find a place to pick watercress or get kai moana. The Green Party doesn't really have the dairy-farm-bashing attitude many think we do.

We will ensure that: Land, Air, Water Aotearoa (LAWA) - River Quality. National reporting Ministry for the Environment and Stats NZ provide a national picture of the environment in regular reports produced under the Environmental Reporting Act 2015. 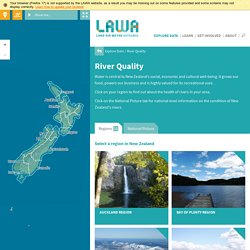 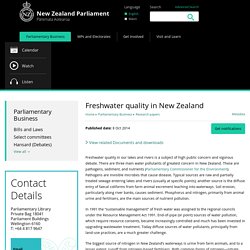 There are three main water pollutants of greatest concern in New Zealand. These are pathogens, sediment, and nutrients (Parliamentary Commissioner for the Environment). Pathogens are invisible microbes that cause disease. Typical sources are raw and partially treated sewage entering lakes and rivers (usually at specific points); another source is the diffuse entry of faecal coliforms from farm animal excrement leaching into waterways. Soil erosion, particularly along river banks, causes sediment. In 1991 the “sustainable management” of fresh water was assigned to the regional councils under the Resource Management Act 1991.