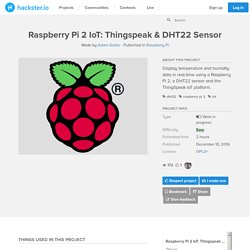 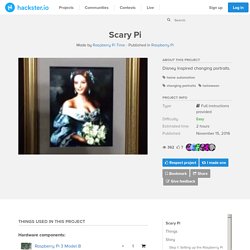 First time i really got scared. There is lot of spooky stuff in that haunted mansion. One of the things they like to do in the Haunted Mansion is have these portraits that slowly change from regular people into monsters. That is my inspiration to do this project for this year (2016) Halloween. We assembled this at the entrance of the house where we handout the candy and some kids loved and some got really scared :-). 3D Scanning with Raspberry Pi and MATLAB. Motivation Raspberry Pi opens a lot of possibilities for do-it-yourself projects. 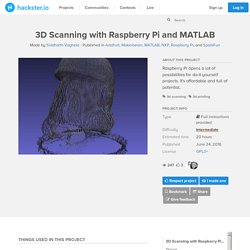 It’s affordable and full of potential for implementing challenging projects. After having spent several years tinkering around my 3D printer, wanting to build my own 3D scanner to complete the 3D work flow was an exciting idea. Hackster. General Description: This project is entitled for the development of a fully functional mobile prototype ”the Rover Station”, responsible for environmental data capture as Temperature, Humidity and Luminosity. 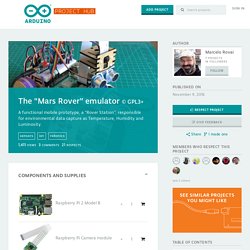 The idea is in the future add other functions/parts to this prototype to really get a Mars Rover emulator. This prototype is for education purposes only and was part of my Capstone Project at Coursera - University of California, Irvine "An Introduction to Programming the Internet of Things (IOT)" course. Run Raspberry Pi on Smart Phone.

Step 1: Getting Raspberry pi IP Address: To begin with the project, one will need to know the IP address ofraspberry pi. 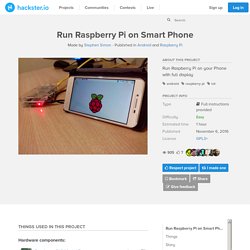 In order to do so connect your raspberry pi with the LCD and, type "ifconfig" or "hostname-I" in the terminal window. Note: Only for this particular section any external display is used like LCD, else for whole of the project smartphone (Android Phone) will be used. Another Smart Mirror - Artik Cloud Edition. Overview This is the continuation of the Another Smart Mirror version 2 that was published about a month ago. 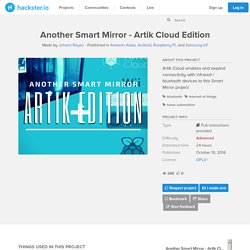 This project objective is to research and see what can be possible to create with current libraries and APIs to get as close as possible to the video that I would like to call my main inspiration: A Day Made of Glass. That video display such great ideas that are and would be possible in the near future. So this is my attempt to do so. So here is Another Smart Mirror - Artik Cloud Edition. Step 1: Artik Cloud setup. Build a Compact Raspberry Pi 3 cluster (part 1): assemble – Huidong Tian – IT advisor, R and RPi fan. Shopping list: The RPi 3 consumes more power than it’s predecessor due to it includes WiFi and Bluetooth. 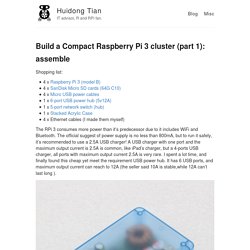 AWShome - Home automation using RPi + Alexa + IoT. Demo Video Introduction Most wireless outlets like Wink and SmartThings cost around $70, and then each additional outlet can cost another $50! 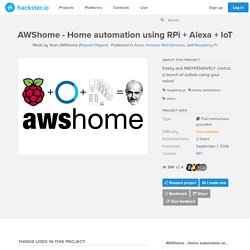 Older remote control outlets, like this one from Etekcity, can be as cheap as $5 an outlet! The problem is, they don't have all those fancy voice and Wi-Fi features the new ones do, that's what this tutorial is going to help you solve! We'll be using a Raspberry Pi (any model will do, but the pins might be different!)

There's no hard language dependency, all of the libraries I use are basic and written in multiple languages. All IDs in this tutorial were deleted after completion, so don't worry about everyone being able to see my authentication secrets! Hackster. Proof of Concept I have created a sample skill for Alexa using this service to turn on RGB LEDs and play a game which can be found here. 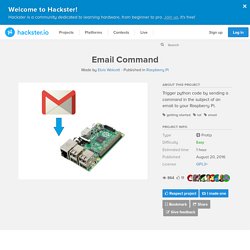 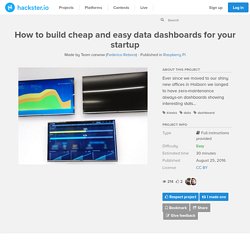 Initially we tried a spare Mac Mini, which was a disappointment — it took up lots of space and it felt wasteful to use more of such expensive devices to cover for our 6+ large screens. After trying out several solutions (including small android devices) we settled with Raspberry Pis which work delightfully and are easy to conceal.

Before we start, please note that I use a Macbook at work so my examples will be focused on MacOS users. Alexa Assistant Prototype. Alexa Assistant Prototype. The Carputer. Meet Benjamin, a trainee air traffic controller from the southeast of France. Benjamin was bored of the simple radio setup in his Peugeot 207. Tracking Aircraft with a RPi. What is radar spotting I hear you ask? Basically, it’s tracking aircraft that are in flight, from your PC or smartphone. It takes plane spotting to the next (geeky) level. If you want a more in depth answer, there are a heap of resources that describe it in much greater detail (check out the FlightRadar24 guide to start) Why?

Short answer .. why not? A while ago I took my kids to the Perth Airport Public Viewing Platform to watch some planes take off and land and we all had a good time. I have played with a couple of different apps, on my phone, that show flights but didn’t bother too much as they had ads in the bottom of the screen, which annoys me. Then one day I was lamenting to one of my work colleagues about a Raspberry Pi I had that was sitting in my drawer doing nothing. What? MichMich/MagicMirror.

Recommended Hardware For more about the required 433mhz transmitter/receiver and the supported hardware see the hardware-layer page. Raspberry Pi Security System with Motion Detection / Camera. Requirements You will need this hardware: Raspberry Pi with camera interface.Raspberry Pi camera module.PIR sensor module. Any generic HC SR501 (or similar) module should work. Example from Adafruit.USB Wi-Fi that supports monitor mode. I used a RT5370 based adapter, they are cheap at about €6 and easy to find.An enclosure of some sort. Control a Door Lock from a Smartwatch. Motivation Smartwatches are gaining in popularity as they are more affordable and offer good and easy APIs for developers.

Moreover, they are easier to use in everyday actions. I published some time ago Open Sesame project that aims to enable the control of the doors using a Smartphones. In this project, I propose an application for pebble watches to control this system. Temperature and Humidity from Pi to Power BI. Weather Station V 2.0. Smart Environmental Monitoring. Description The goal is to build a small and easy to use device to monitor temperature, humidity, noise levels, luminosity and atmospheric pressure. The idea is to have multiple devices spread across the city to send environmental data to the AWS IoT platform for processing and analysis. Open your Garage Door Using Bluetooth LE (BLE)