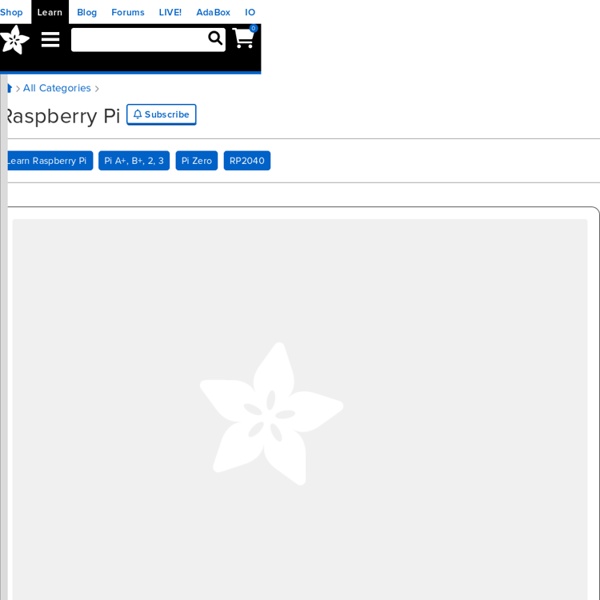 Coder for Raspberry Pi A simple way to make web stuff on Raspberry Pi. Coder is a free, open source project that turns a Raspberry Pi into a simple platform that educators and parents can use to teach the basics of building for the web. New coders can craft small projects in HTML, CSS, and Javascript, right from the web browser. Which Board is Right for Me? For a few months after Raspberry Pi came out, the choice was pretty simple. If you wanted to talk to arbitrary electronics, your best bet was to buy an Arduino microcontroller board; if you needed the power of an ARM-based processor to run Linux, the Raspberry Pi single-board computer (SBC) was the obvious choice (that is, if you could get your hands on one. Delivery issues are mostly resolved, but last year some people waited more than six months for their Pi). Before Arduino and Raspberry Pi, things were more complicated. Going forward, things aren’t just complicated again — they’re bewildering.

Comment attacher votre Raspberry Pi avec votre iPhone 5 Posted by dconroy on Jul 3, 2013 in How To's | 26 comments | 51,826 views If you have been reading my blog lately you know that I have done a lot of projects involving Raspberry Pi‘s, the $35 dollar credit card sized Linux computer. Because of its small size, I recently started of thinking of projects that would allow me to be mobile with the Pi. That led me to this post. Raspberry Pi SSH Login without Monitor Raspberry Pi SSH Login without Monitor The Raspbian "wheezy" distro we have been using comes with SSH telnet access enabled, and this is a great way to get terminal access to your Raspberry Pi without having to hook it up to a monitor and keyboard. All you need connected to your Raspberry Pi is the power and an internet connection. By default the Raspberry Pi will be allocated an IP address by your router. However, next time you power it up the router may allocate a different IP address. This is a problem because in order to connect through SSH we need to know the Raspberry Pi's IP address on your local network, and we can't see this if we dont have a monitor attached.

Raspberry Pi Model B+ – Raspberry Pi Projects Using Model B SD Cards On The Model B+ SD cards should be interchangeable between a model B and a model B+ as long as the card was created since the release of the Model B+, or has been inserted into a model B since the B+ was released and these commands entered to update the OS and any other packages supported by apt-get: sudo apt-get update […] Read More →

10 Great Arduino Projects for Beginners Advertisement Completing an Arduino project gives you a sense of satisfaction like no other. The problem is, most beginners aren’t sure where to start, and without previous Maker experience, or some sort of electronics background, even beginner’s projects can seem rather… well, daunting. Today we’re going to feature 10 simple projects that even the most novice of Arduino DIY’ers can build without the need for expensive add-ons, or hard-to-find parts. To get started, all you’ll need are the items that come in most Arduino starter kits, such as: Raspberry Pi starter kit aims to inspire IoT innovation 04 September 2013 Internet of Things (IoT) manufacturer Ciseco has taken the wraps off a new Raspberry Pi inventor's kit called RasWIK. The 88 piece kit provides simple step by step instructions for Raspberry Pi users to create their own wireless devices; without the need for configuration or even writing code.