MagicMirror Forum. Michael Teeuw. When I built my MagicMirror 2 year ago, I could have never predict the popularity of the project. 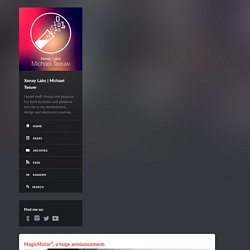 With over 2,5 million pageviews on my blog, 1250 stars and almost 500 forks of the GitHub repository and a growing list of MagicMirror builders, the MagicMirror project deserves some extra love. Time to announce something awesome! When I worked on the original project, the interface of the MagicMirror was just one of few stept in the process of making the first prototype. Because I never expected others to built upon my proof of concept, the software wasn’t as powerful and thought-through as it should have been from the start.

In the past two years, many community members worked on expanding the MagicMirror system allowing them to customize it to their needs. There clearly was the need for a modular system allowing users to install extensions without the need to modify the core framework. So without further ado I proudly announce MagicMirror², The open source modular smart mirror platform! MichMich/MagicMirror: MagicMirror² is an open source modular smart mirror platform. With a growing list of installable modules, the MagicMirror² allows you to convert your hallway or bathroom mirror into your personal assistant. Turn ANY Display Into A Touchscreen for LESS than $4. How to Give Your Smart Mirror Artificial Intelligence. How to Make a Raspberry Pi Smart Mirror. 6 Best Raspberry Pi Smart Mirror Projects We've Seen So Far. The magic mirror of the future won’t just say you’re the prettiest of them all. 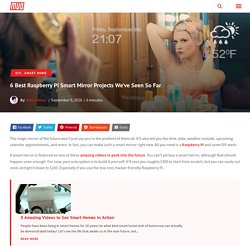 What You’ll Need Whichever smart mirror project you decide to do from this list, there are a few elements you’ll always need. A Two-Way Mirror It’s a smart mirror, so it should be no surprise that you actually need a mirror, right? An LCD Monitor This is the best way to make use of any old computer monitor you have lying around. MichMich/MagicMirror: MagicMirror² Evancohen/smart-mirror: The fairest of them all. 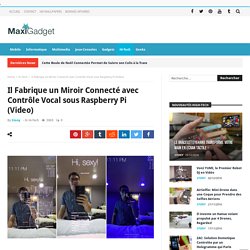 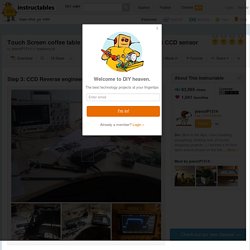 This is achieved by "shifting" the signals between stages within the device one at a time. CCDs move charge between capacitive bins in the device, with the shift allowing for the transfer of charge between bins. The CCD is a major piece of technology in digital imaging. In a CCD image sensor, pixels are represented by p-doped MOS capacitors. Basically, the CCD you find in a scanner doesn't read lights in two dimensions, but on one line. As I couldn't find any tutorials explaining how they work on the internet, I tried to understand the logic by myself. Then you can check if some lines are bigger than others (it's probably going to be the power and the ground, you can verify which one it is with your oscilloscope when the power is ON).