47 Animated Videos Explain the History of Ideas: From Aristotle to Sartre. This year we've been featuring short animated videos from BBC Radio 4, all covering the big questions: How did everything begin? 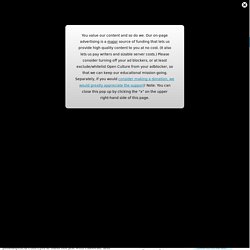 What makes us human? What is love? How can I know anything at all? They've all come scripted by philosopher Nigel Warburton (he of Philosophy Bites podcast fame) and narrated by a host of notables from both sides of the pond like Stephen Fry, Gillian Anderson, Aidan Turner, and Harry Shearer. They've illustrated the philosophical concepts at hand not just with elaborate and joke-filled drawings that come to life before your eyes, but with direct reference to the ideas of history's best-known thinkers: Aristotle, Descartes, Hume, Wittgenstein, de Beauvoir, Sartre, Freud, Chomsky — the list goes on. 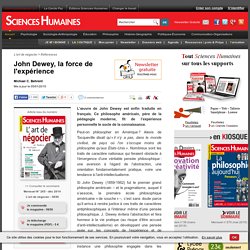 Ce philosophe américain, père de la pédagogie moderne, fit de l’expérience personnelle le socle de la connaissance. How To Teach All Students To Think Critically. All first year students at the University of Technology Sydney could soon be required to take a compulsory maths course in an attempt to give them some numerical thinking skills. 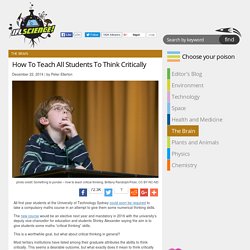 The new course would be an elective next year and mandatory in 2016 with the university’s deputy vice-chancellor for education and students Shirley Alexander saying the aim is to give students some maths “critical thinking” skills. This is a worthwhile goal, but what about critical thinking in general? Most tertiary institutions have listed among their graduate attributes the ability to think critically. This seems a desirable outcome, but what exactly does it mean to think critically and how do you get students to do it? Brila – Projets jeunesse ›› Accueil. Ateliers philosophie pour enfants ou adultes. 135 Free Philosophy eBooks. Festina Lente. Love, wisdom and wonder: three reasons to celebrate philosophy. Why Home. Announcements: Why ask WHY? 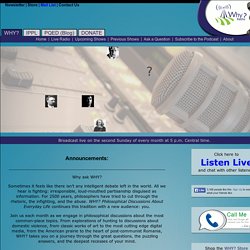 Sometimes it feels like there isn’t any intelligent debate left in the world. All we hear is fighting: irresponsible, loud-mouthed partisanship disguised as information. For 2500 years, philosophers have tried to cut through the rhetoric, the infighting, and the abuse. Institute for the Advancement of Philosophy for Children. The IAPC is the world’s oldest organization devoted to young people’s philosophical practice. 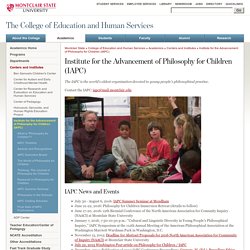 Contact the IAPC: iapc@mail.montclair.edu IAPC News and Events Mission Statement The Institute for the Advancement of Philosophy for Children pursues a three-fold mission: Philosophy and Humanities. March 27, 2015 at Utah Valley University Moral responsibility has consistently been a salient issue in disciplines such as the law, psychology, psychiatry, and philosophy. 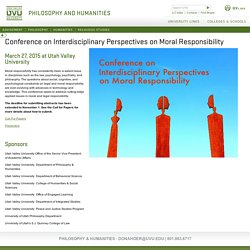 The questions about social, cognitive, and psychological constraints on legal and moral responsibility are ever-evolving with advances in technology and knowledge. This conference seeks to address cutting-edge applied issues in moral and legal responsibility. The deadline for submitting abstracts has been extended to November 1. See the Call for Papers for more details about how to submit. Call For Papers Presenters Sponsors Utah Valley University Office of the Senior Vice President of Academic Affairs. 2014-15 PLATO Essay Contest : PLATO: Philosophy Learning and Teaching Organization. The PLATO High School Essay Contest awards will be given to the best philosophical essays written by high school students, in response to the year’s contest essay question. 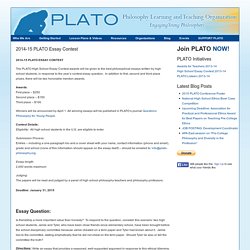 In addition to first, second and third place prizes, there will be two honorable mention awards. p4c.com - p4c resources and collaboration. Opinion: Philosophy for kids? It’s absolutely essential for the classroom. PHILOSOPHY IS A discipline which is often misunderstood and even sometimes derided. 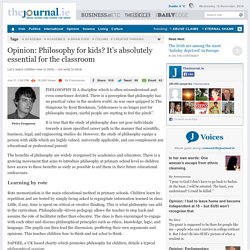 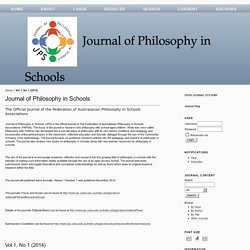 The focus of the journal is research into philosophy with school-aged children. What was once called Philosophy with Children has developed into a sub-discipline of philosophy with its own history, traditions and pedagogy and incorporates philosophical inquiry in the classroom, reflective education and Socratic dialogue through the use of the Community of Inquiry (CoI) methodology. The journal focuses on academic research articles into the pedagogy and practice of philosophy in schools. FAPSA - Federation of Australasian Philosophy in Schools Associations About » Introduction The Federation of Australasian Philosophy in Schools Associations (FAPSA) is a professional non-profit organisation promoting philosophy in schools and representing the interests of its affiliated associations across Australia, New Zealand and Singapore. 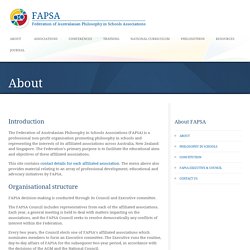 There have been a number of studies and programs involving philosophy with children in several countries. The results are impressive. One notable example is the Buranda State School, a small Australian primary school near Brisbane, which in 1997 introduced into all its classes a philosophy program.