Amor Towles A Gentleman in Moscow

If a man does not master his circumstances, then he is bound to be mastered by them

Oonah Keogh, the world’s first female stockbroker. In an age when women were removed from the public sphere, resigned to being ‘first and foremost a mother’ lest they are wrenched from ‘the bosoms of their families, from the preparation of their husbands’ dinners’, a 22-year-old Dubliner called Oonah Keogh took her position on the most meritocratic of platforms: the Dublin Stock Exchange to become the world first female stockbroker. 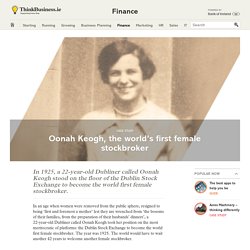 The year was 1925. The world would have to wait another 42 years to welcome another female stockbroker. “Styled in silk blouses, a loose bun and Ma Griffe perfume, her tall, elegantly feminine appearance contrasted with that of her male counterparts.” Uncovering a gem Little was known about the world’s first female stockbroker until Deirdre Somers (chief executive of the Irish Stock Exchange) unearthed her story from the basement of the business she leads. “She railed against the idea of feminism, challenging the notions of what it means to masculine and feminine.” Financial inclusion. Zadie Smith: ‘I have a very messy and chaotic mind’

Zadie Smith’s second collection of essays, Feel Free, could be described as a tour through her enthusiasms punctuated with diversions. 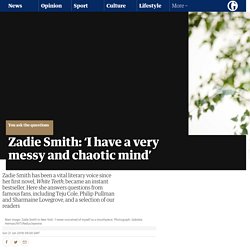 She writes with equal fervour about Jay-Z’s rapping, which “pours right into your ear like water from a tap”, as about Edward St Aubyn’s “rich, acerbic comedy”. Her early dislike of Joni Mitchell is used as a segue into a discussion of philistinism and taste. A booklet on early Italian masterpieces sparks an examination of the concept of corpses and the unthinkability of death. Although the subjects may seem wide-ranging, she says, “they always seem very narrow to me. I’m very familiar with what I’m enthusiastic about, and it’s hard to see variety in your own tastes.” Marie Madeleine - Her Life. Marie Madeleine Victoire de Bengy de Bonnault d’Houët Foundress of the Faithful Companions of Jesus Marie Madeleine is a woman for our time; a French woman of inspiration and courage. 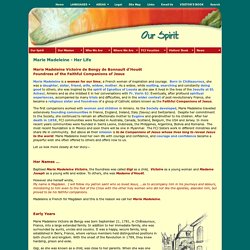 Born in Châteauroux, she was a daughter, sister, friend, wife, widow, mother. As a widow, while waiting, searching and constantly doing good to others, she was inspired by the spirit of Ignatius of Loyola as she saw it lived in the lives of the Jesuits at St. Acheul, Amiens and as she imbibed it in her conversations with Fr. Varin SJ. The first companions worked with women and children in Amiens. Let us look more closely at her story— Her Names ... Baptised Marie Madeleine Victoire, the foundress was called Gigi as a child, Victoire as a young woman and Madame Joseph as a young wife and widow. However she herself wrote, My name is Magdalen. Madeleine is French for Magdalen and this is the reason we call her Marie Madeleine. Early Years Gigi, as she was known as a child, was close to her parents. Friendship. Most young doctors are female while most older doctors are male. 10 things every physician needs to know about burnout.

Celebrity isn’t just harmless fun – it’s the smiling face of the corporate machine. Now that a reality TV star is preparing to become president of the United States, can we agree that celebrity culture is more than just harmless fun – that it might, in fact, be an essential component of the systems that govern our lives? 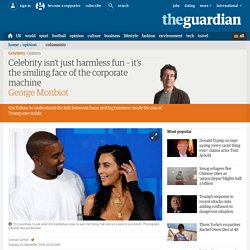 The rise of celebrity culture did not happen by itself. It has long been cultivated by advertisers, marketers and the media. And it has a function. The more distant and impersonal corporations become, the more they rely on other people’s faces to connect them to their customers. Corporation means body; capital means head. An obsession with celebrity does not lie quietly beside the other things we value; it takes their place. A paper in the International Journal of Cultural Studies found that, among the people it surveyed in the UK, those who follow celebrity gossip most closely are three times less likely than people interested in other forms of news to be involved in local organisations, and half as likely to volunteer.