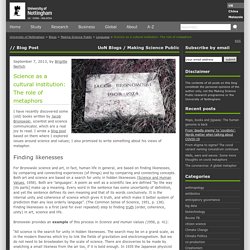 I wrote a blog post based on them where I explored issues around science and values; I also promised to write something about his views of metaphor. Finding likenesses. About – Digital Herbarium of Crop Plants. Oh joy!!! #Herbarium has English rules in the box! □ Making Colors (6): Space and Resources in Historical Remaking - Jessie Wei-Hsuan Chen. *This blog post is part of the series Making Colors. 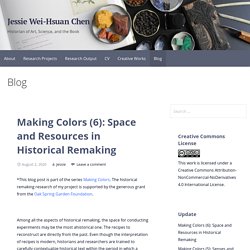 The historical remaking research of my project is supported by the generous grant from the Oak Spring Garden Foundation. Among all the aspects of historical remaking, the space for conducting experiments may be the most ahistorical one. The recipes to reconstruct are directly from the past. Even though the interpretation of recipes is modern, historians and researchers are trained to carefully contextualize historical text within the period in which a recipe was written or recorded.

The materials used for remaking—in spite of the fact that they are often grown, produced, or processed differently nowadays—usually have similar properties as historical ones to offer enough points of comparison. The workspace for remaking experiments, on the other hand, usually does not resemble a historical studio or workshop in its appearance. 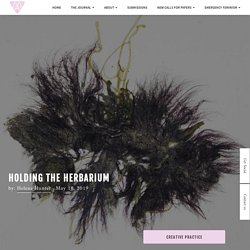 The project is shaped by a series of encounters with organic materials including minerals and rocks, algae, and fossilised animal remains of extinct species. During these encounters, creative methods of noticing (Lowenahupt Tsing 2017) are engaged, and poetic language functions as a method to materialise narratives and affects to bring the materials into contact with the broader context of environmental change. The project seeks to address the gap in forms of language and representation that occurs within human-non/human relations and to experiment with practices of attention and noticing within this gap.

The aim is to not write about but to write with and to avoid representation or objectification of the algae. The Caught by the River Book of the Month: May. William Arnold’s Suburban Herbarium – a collection of one hundred photographic specimens of plants, which together form a homage to Victorian botany from the rear-garden cut-through, waste-ground, marshes and back-lanes of Truro’s rural-urban fringe – is just-published by Uniformbooks, and is our book of the month for May. 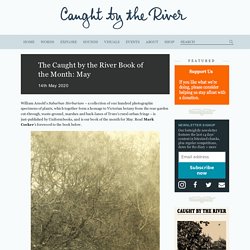 Read Mark Cocker’s foreword to the book below. At one level Suburban Herbarium seems a very simple book. Before you, over the following pages, is a series of one hundred plates of plants, grasses and ferns found on one small geographical plot. They are black-and-white photographic portraits but, if anything, they seem to convert their vegetable subjects to even deeper levels of simplicity. Instead of the minute details of foliage and flower that one has come to expect from digital macro-photography, here are the organisms represented as minimalist shapes of intense light. Turn now to perhaps the simplest of all of the images, that extraordinary plate on page 16. Suburban Herbarium: Photographs. ‘”Herbarium Indicum” by Alex Davis at Exhibit 320, New Delhi. Inspired by his early days spent outdoors exploring, artist and designer Alex Davis is the mastermind behind a new exhibition at Exhibit 320 in New Delhi. 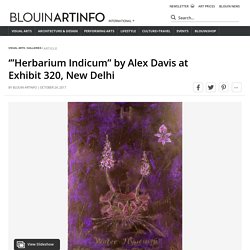 “Herbarium Indicum” is the striking title of the exhibition, which runs until November 10, 2017. This exhibition by Alex Davis is an epitome of the amalgamation of Fine Arts with Botanical Science. The artwork instils in the observers a sense of fragility and shows the beauty of flora and fauna from the perspective of this unique artist. Most of Davis’ childhood days were spent in the backwaters of Kerala and the foothills of Western Ghats. Davis' "Herbarium Indicum" is an exact a reflection of those days. Davis works in New Delhi and is not just an artist but a designer too. Herbarium II by Christine Wylie.

JENNY YURSHANSKY: Blacklisted A Planted Allegory Herbarium. Description: This project investigates the distinction between native versus invasive species as determined by Artsdatabanken (The Species Database), a Norwegian scientific organization. 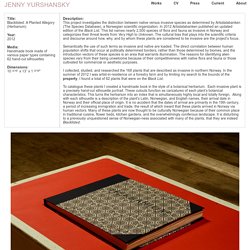 In 2012 Artsdatabanken published an updated edition of the Black List. This list names nearly 2,500 species of flora and fauna as invasive in Norway and categorizes their threat levels from Very High to Unknown. The cultural bias that plays into the scientific criteria and discourse around how, why, and by whom these plants are considered to be invasive are the project’s focus. Herbarium-inspired poetry. This Sunday, 2 June 2019, there is a chance to hear poetry read in the Botanic Cottage, with afternoon tea and nature-inspired poems from award-winning and widely published poets. 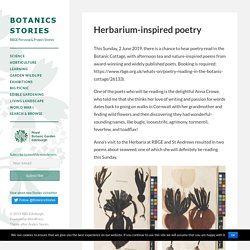 Booking is required: One of the poets who will be reading is the delightful Anna Crowe, who told me that she thinks her love of writing and passion for words dates back to going on walks in Cornwall with her grandmother and finding wild flowers and then discovering they had wonderful-sounding names, like bugle, loosestrife, agrimony, tormentil, feverfew, and toadflax!

Anna’s visit to the Herbaria at RBGE and St Andrews resulted in two poems about seaweed, one of which she will definitely be reading this Sunday. It is wonderful to think of the Herbarium as a source of inspiration for poetry. I find Anna’s poetry truly wondrous and captivating, all the more so having witnessed her enthusiasm when I introduced her to the herbarium world. The Green Mysteries: An Occult Herbarium by Daniel A Schulke, Benjamin A Vierling. The Green Mysteries is the product of twenty-five years of experiential research on the spiritual and occult properties of plants. 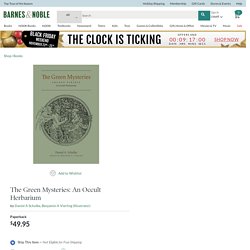 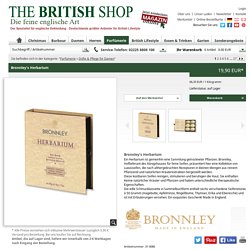 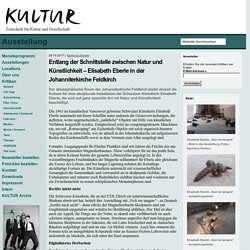 Cailleachs Herbarium: Exploring Lost Scottish Folk Traditions. Herbarium: Collection of Herbal Resources. Tadhg's Apothecary: Herbarium, herbal remedies. The Herbarium Hanalee – the last apothecary (Fictional) “Pages from what is now known as the Herbarium Hanalee, a journal kept by the first proprietor of the Black Rock Apothecary, Hana Kim. While the original pages of the Herbarium Hanalee were written in a complicated code script, it has since been translated. Ms. Kim was one of the first colonists on the Black Rock, and her work in documenting the early species grown, created, and found to treat many common space maladies has been instrumental in the growing field of space herbalism. Herbarium Riso: Risograph-printed independent artists’ publications.

Set up in December 2012 by Franziska Brandt and Moritz Grünke (We Make It & Gloria Glitzer), Herbarium Riso brings together an extensive selection of the most compelling Risograph-printed independent artists’ publications, zines and ephemera. With more than 170 books in their collection, Herbarium Riso is one of those destinations you definitely cannot miss if you visit Berlin. It is a perfect place for meeting artists, publishers and people who share a common interest in the arts and culture as well as the future of contemporary publishing. Just make sure you get in touch with them before making a visit.

Appointments can be made via email. Sonya Patel Ellis: Between Nature, Art, and Culture. Herbarium – Divine Herba: Music. “If a tree falls in a forest and no one is around to hear it, does it make a sound?” Pretty much anyone who’s ever spent even an instant of their life engaged in some kind of philosophical thought will have encountered this thought experiment, or at least engaged with the concepts it attempts to meditate one’s mind upon; reality, existence, perception, observation etc. However, considering all discourse upon those matters can be located elsewhere, I’m not going to expend any energy in repeating it here. Instead, I would like to take a slightly different tack, and approach the subject on a much more basic level. I’ve been walking in the woods and have heard a tree fall.