Meet our Fellows: Q&A with Flower Book Researcher Jessie Wei-Hsuan Chen. My dissertation subject is a seventeenth-century book category that most would regard as the florilegium, or sometimes loosely called the flower book. 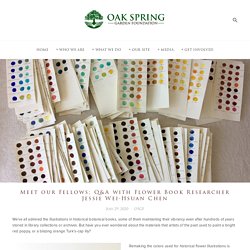 They are collections of botanical illustrations, mostly images of garden flowers. Depending on who you ask, they are often argued to be simply the coffee table book of the past with little to no scientific value. My approach to these images is to look at them from a more holistic perspective. Concluding the Europeana image classification pilot. Our learnings From our experiments we have concluded that the model is able to correctly identify multiple relevant labels for the given images. 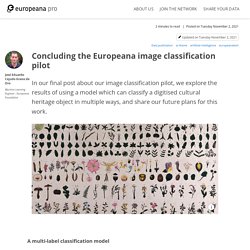 The multilabel approach is more helpful than using single labels since it can apply several labels to each image with high confidence. Despite the interesting results, the performance of the resulting model is far from perfect, and we can attribute this to several factors. The most important is the relatively low quality of the dataset gathered. We found out that many of the images retrieved don’t have correct metadata. 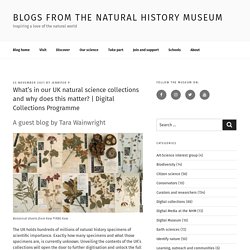 Exactly how many specimens and what those specimens are, is currently unknown. The Linnean Society - VeryConnect. Visual depictions of plants, animals, and other entities have played a crucial role in the formation of natural historical knowledge. 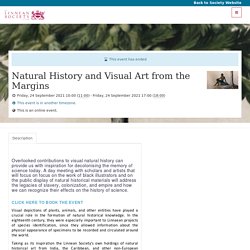 In the eighteenth century, they were especially important to Linnaean projects of species identification, since they allowed information about the physical appearance of specimens to be recorded and circulated around the world. Taking as its inspiration the Linnean Society’s own holdings of natural historical art from India, the Caribbean, and other non-European locales, this symposium focuses on these stunningly beautiful and complex works, as well as their cultural, social, and political meanings. Although non-European locales traditionally have been considered marginal to Enlightenment science, examining the visual archives of natural history shows that they formed important sites of aesthetic and intellectual production. Botany, Trade and Empire: Exploring Kew’s Miscellaneous Reports Collection. Event Description Kew’s Miscellaneous Reports Collection is a major resource relating to colonial and global networks of economic botany and scientific activity between 1850-1928. 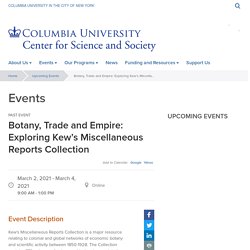 The Collection contains 772 volumes of unique archival and rare printed material which provides evidence of the plants and plant products, botanists, commercial interests, and gardeners, moving across an expanding web of botanic gardens and agricultural and forestry stations. It is also a crucial source of evidence for critically examining and confronting Kew’s own history and colonial role. Discover the central themes of botany, trade and empire, and explore the collection’s challenges, from revealing the unheard voices of the past, to realizing the future potential of this colonial archive. Event Speakers. When Canton Met London: A Botanical Bridge in the Work of John Bradby Blake, 1766-1773 – Centre for Environmental Humanities.

In the 1770s, the English trader John Bradby Blake made one of the earliest systematic attempts to document the diversity of Chinese plants, based on careful observations of the material he was able to access while based in China. 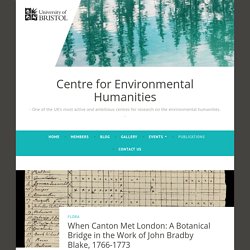 His time there coincided with the operation of the Canton System (1757-1842), when Guangzhou (Canton), along with nearby Macao, was the only harbour open to Westernerswanting to trade with China. John Bradby Blake appears to have been a self-taught botanist prior to becoming a trader with the British East India Company in 1766. He put this expertise to work shortly after he began his duties in Guangzhou as ‘supercargo’. From the start, Blake’s goal was to use his spare time in the off-trade season to collect the plants that he encountered, many of which were little known in Europe at that time. Around 1771, Blake started to produce drawings and notes for his Chinese “flora”.

Blake’s project was cut short by his early death in 1773. Like this: Like Loading... The Book of Nunnaminster as Digital Reproduction and Material Object – Doing History in Public. By Kate R. 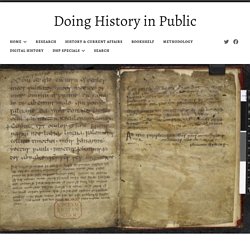 Falardeau (@kate_falardeau) In March 2020, I was preparing to visit the British Library to examine the Book of Nunnaminster (London, British Library, MS Harley 2965) for my MPhil dissertation when the first Covid-19 lockdown began.[1] I’ll be honest— during those first few weeks of lockdown, the accessibility of research material for my dissertation was not exactly at the forefront of my mind. By the time I was able to think about my research project again, almost 3,000 miles and a litany of Covid-19 restrictions had separated me from the manuscript.

Luckily, the Book of Nunnaminster had been digitised.[2] I first encountered the manuscript in digital reproduction and would return to it during four lockdowns spent in two different countries. The MPhil dissertation chapter morphed into a conference presentation that became a draft journal article, and I had still never seen the manuscript in person. [2] The manuscript is digitised at Image credits: Like this: Like Loading... Supporting the Biodiversity Community: BHL Engages in Global Biodiversity Projects. The Biodiversity Heritage Library thrives on international partnerships and collaborative projects. 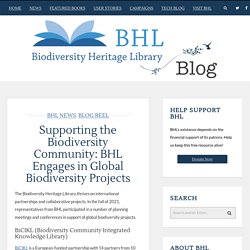 In the fall of 2021, representatives from BHL participated in a number of planning meetings and conferences in support of global biodiversity projects. BiCIKL (Biodiversity Community Integrated Knowledge Library) BiCIKL is a European-funded partnership with 14 partners from 10 countries. The objective is to improve infrastructure to create a Biodiversity Knowledge Hub that provides a full set of linked, open biodiversity data, including names, genetics, occurrence data, natural history, authors and publications. The end result will be access to data at all points in the research cycle. BiCIKL Homepage. Following Living Things and Still Lifes in a Global World: Introducing Cheng He's research, 27/10/21, Humanities Research Centre blog. Writing about web page In this first blog post relating to the HRC conference on 'Following Living Things and Still Lifes in a Global World', one of the co-organisers, Cheng He, a third year PhD student in History, explains how the theme of the conference links to her own doctoral research. 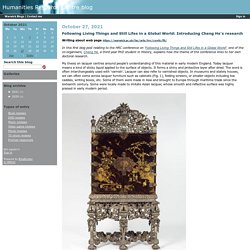 My thesis on lacquer centres around people’s understanding of this material in early modern England. Today lacquer means a kind of sticky liquid applied to the surface of objects. It forms a shiny and protective layer after dried. The word is often interchangeably used with ‘varnish’. Japanned cabinet on stand, English, c. 1690, 218 cm x 101.6 cm x 49.5 cm, Victoria & Albert Museum, London. Circulation of Images in the Life Sciences, Call for Papers Due 6/14. Call for Papers: The Circulation of Images in the Life Sciences Application Deadline: June 14, 2021 Event Date: 16-17 and 23 October, 2021 Location: Online through the Consortium of the History of Science, Technology, and Medicine Images are crucial to work in the life sciences. 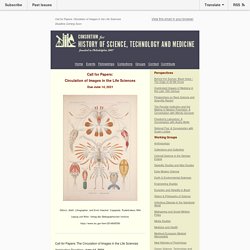 Visual and pictorial representations that reveal biological content have been borrowed, shared, and copied across the various subdisciplines of biological research and beyond. Epistemically and practically, but also for purposes of rhetoric, education, funding, and dissemination, the use of such representations as multidimensional tools has diversified since the 1800s. Focusing on the life sciences, this workshop aims to establish a dialog between papers that investigate the intersection of scientific knowledge-production with its dissemination to scientific and non-scientific audiences. We will ask: How and why are images borrowed and reused? These questions can certainly be extended to all the sciences. Program – Centre for the Study of Medieval Manuscripts and Technology (CeMManT) The online event on 8 October 2021 from 15:00-19:00 will take the form of discussions of the videos among the moderator and speakers.

Audience members may ask questions via the chat. Please watch the videos before the event. To participate as an audience member, you must first register via Tickettailor. Welcome – 15:00Session 1 – 15:05-15:45 – The nuts and bolts of digitization in practice Moderator: Ann-Sophie Lehmann Astrid Smith – Digitization ellipses A digital manuscript appears on our screens fully-formed, in a dazzling array of pixels, like a cake coming out of the oven on a cooking show—we are not present for the steps between physical and digital, and as viewers we may or may not mentally insert the unrecorded digitization “baking time” that has been concealed.

Physical distancing from manuscripts and the presence of the digital facsimile – Cambridge Medieval Graduate Students. Suzette van Haaren is a PhD student at the University of St Andrews and the University of Groningen. She is writing her dissertation on the effects of digitisation for the reproduction, perception and preservation of medieval manuscripts. Follow her on Twitter @suzettevhaaren. It seems that on my daily rounds of exercise (be they walks or cycle rides) through Cambridge, I find myself gravitating more and more back to the spaces where I look at manuscripts. Today I passed by Corpus Christi College, where, behind the large wooden doors, the Parker Library is situated. My current case study is kept there: the Bury Bible (CCCC, ms. 2), a giant twelfth century bible, now bound in three volumes, that originates from the monastery of Bury St Edmunds and is one of the most treasured examples of English Romanesque manuscript painting.

Before I begin, I would like to acknowledge that the physical distance from manuscripts as research objects we are experiencing is not new. [xii] Green 2018. Reflections on TDWG 2020 Virtual sessions and other thoughts on long term data infrastructures – DiSSCoTech. This year the annual conference of the Biodiversity Information Standards (historically known as the Taxonomic Databases Working Group — TDWG) is virtual and happening in two parts. The working sessions were concluded a few weeks ago and are separated from the virtual conference, which will be held on October 19-23. All the recordings of the working sessions are now available in youtube.

As several people already mentioned in twitter (#TDWG2020) the single track and the virtual format allowed participation from around the world which generated a wide range of discussions on not just data standards but also about data curation, attribution, annotation, integration, publication and most importantly the human efforts that are behind the data and systems. It is this human aspect in the midst of our current data-intensive approach got me thinking about several contrasting aspects of biodiversity informatics and natural science collections management.

Historical data. A portrait – History in translation – Mateusz Fafinski. Historical data is not what you think it is and you should be careful when you use it. This is the tl;dr version of this article. But there is of course more to it. We observe recently a particular proliferation of data science forays into the historical datasets. Isn’t that cool? But most of them tend to range on a scale from bad to very bad. 3D images of 19th-century glass marine invertebrates go online. Touch or click and drag your mouse to explore. View more 3D models. The researchers successfully digitized 19th-century glass models of 15 marine invertebrates made by Rudolf and Leopold Blaschka. Sustaining Digital Humanities in the UK. September 25, 2020 Report Open Access Giles Bergel; Pip Willcox; Guyda Armstrong; James Baker; Arianna Ciula; Nicholas Cole; Julianne Nyhan; Mia Ridge; Oscar Seip; Claire Taylor; Pip Thornton; Elizabeth Williamson; Jane Winters Other(s)

Digital content editing. Our Manifest Editor is a visual tool for working with IIIF resources. With additional plugins, it becomes a powerful content-creation environment for digital storytelling. A Database for Three Dioscoridean Illustrated Herbals. Botany, Trade and Empire: Exploring the Miscellaneous Reports Collection at Royal Botanic Gardens, Kew - Society for Social Studies of Science. The Miscellaneous Reports Collection is a vast archive of botanical history that, until recently, remained in an uncatalogued and deteriorated state until a project to revitalize the collection started in 2018. Here, Project Conservator Aimée Crickmore and Project Archivist Rachael Gardner discuss their work on the project.