Angola: Quissama Park Gains Herbarium - allAfrica.com. Luanda — A herbarium was built this year in Quissama Park, near Luanda, where a large range of plants gathered from some conservation areas around the country are being catalogues. 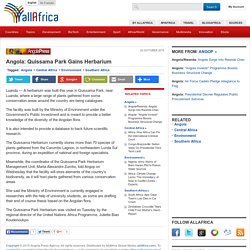 The facility was built by the Ministry of Environment under the Government's Public Investment and is meant to provide a better knowledge of the diversity of the Angolan flora. It is also intended to provide a database to back future scientific research. The Quissama Herbarium currently stores more than 70 species of plants gathered from the Carumbo Lagoon, in northeastern Lunda Sul province, during an expedition of national and foreign specialists. Meanwhile, the coordinator of the Quissama Park Herbarium Management Unit, Marta Alexandre Zumbo, told Angop on Wednesday that the facility will store elements of the country's biodiversity, as it will host plants gathered from various conservation areas. Protecting Congo’s botanical treasures. Efforts from the Congolese Institute for Agronomy Research (INERA) could not keep the center running alone.

When the Belgian Meise Botanic Garden started working here over ten years ago, they were faced with broken windows, no electricity, outdated equipment and terrible road access. The botanical collection has been carefully documented and preserved “When we began our collaboration with the INERA in Yangambi, we were surprised that despite the lack of external assistance and the poor infrastructure, the collection was very well preserved,” explains Francesca Lanata, coordinator of the Meise Botanic Garden’s cooperation program in DRC. “Some of the employees have dedicated their entire lives to protect this knowledge, the least we could do was to commit to sustained support and to improve their working conditions,” she added. 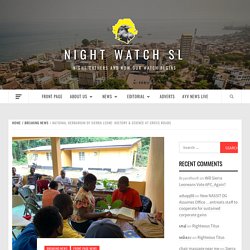 Headed by Prof. Aiah Lebbie, he describes this as a national asset of scientific, cultural and historical significance with its founding dating back to the early 1900s, and was already in existence long before the Sierra Leone Museum was founded in 1957. A good number of energetic plant collectors resident in the country in the colonial period contributed to its humble beginning, collecting plant specimens across the country and archiving them for scientific purposes. The most prolific collector was a British Plant Pathologist/Mycologist by the name of Frederick C. Basil Miller Herbarium, South Africa. Geo Potts Herbarium: South Africa. Welcome to the website of Geo Potts Herbarium (BLFU) This online database provides access to herbarium specimen data at the BLFU herbarium in the Free State, South Africa. 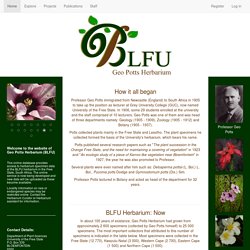 Meet the Tanzanian building his own herbarium. Canisius Kayombo is a researcher enriching our understanding of plants and science in Tanzania. 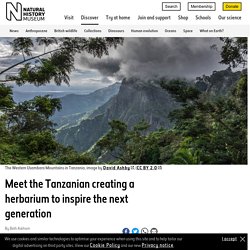 In his career so far, Canisius has collected over 10,000 botanical specimens. He has published papers on Tanzania's seaweeds, sea grasses, the impact of climate change on small-scale tobacco, above-ground carbon storage and floristic diversity. There is even a plant species named after him stored at Royal Botanic Gardens, Kew. One of Canisius's many accomplishments is establishing the herbarium at the Forestry Training Institute, Olmotonyi, which is used for research and teaching. A place to learn about plants 'A herbarium is a place to study and learn,' says Canisius. Within a small building in the Forestry Training Institute (FTI) Olmotonyi in Arusha, Tanzania, sit 16 purpose-built cabinets housing 4,000 to 6,000 mounted and labelled botanical specimens. 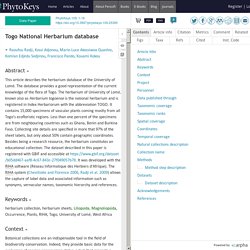