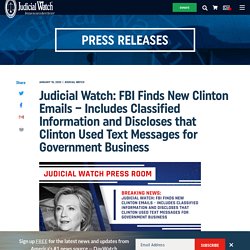 JFK Jr Would Have Run for President in 2016, Aide Says. Clinton Foundation Bigwig Snitches on Hillary. By Voice of America [Public domain], via Wikimedia Commons The House Oversight and Government Reform Subcommittee on Government Operations will convene an unprecedented investigation this week into allegations of impropriety by the Clinton Foundation. 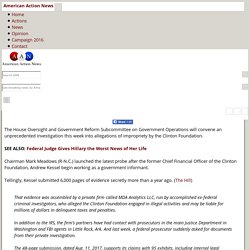 SEE ALSO: Federal Judge Gives Hillary the Worst News of Her Life Chairman Mark Meadows (R-N.C.) launched the latest probe after the former Chief Financial Officer of the Clinton Foundation, Andrew Kessel begin working as a government informant. Tellingly, Kessel submitted 6,000 pages of evidence secretly more than a year ago. The Clinton Body Bag Saga And How Seth Rich & #DNCFraudSuit May Finally Be The End Of Their…

The Clintons are no strangers to scandals they are known for them from Lewinsky Gate to Travel Gate, Email X, ChinaGate, Whitewater, Mena, Arkancide, Troopergate and the list goes on and on. 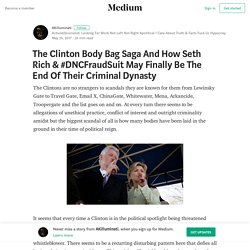 At every turn there seems to be allegations of unethical practice, conflict of interest and outright criminality amidst but the biggest scandal of all is how many bodies have been laid in the ground in their time of political reign. ‘Clinton death list’: 33 spine-tingling cases. (Editor’s note: This list was originally published in August 2016 and has gone viral on the web. 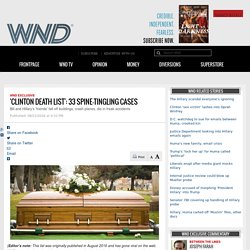 WND is running it again as American voters cast their ballots for the nation’s next president on Election Day.) How many people do you personally know who have died mysteriously? How about in plane crashes or car wrecks? Documents: FBI Carefully Planned Clinton-Lynch Tarmac Trip, Tried To Cover It Up. The Federal Bureau of Investigation (FBI) under director James Comey carefully plotted logistics and security for President Bill Clinton’s meeting on an airplane tarmac with then-Attorney General Loretta Lynch during the 2016 campaign. 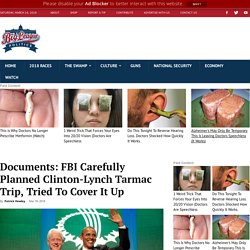 The FBI then attempted to cover up the tarmac meeting by targeting a Bureau whistleblower. The FBI worked with its offices around the country to execute the plan. Breaking Judicial Watch emails (READ THEM HERE) show an FBI plot to cover up Bill Clinton’s meeting with Lynch, which Lynch claimed was just about golf and grandchildren. He’s Just Been Found Dead After Exposing The Clintons. Another day and another dead body with a connection that cannot be ignored as Hillary Clinton’s body count seems to be on the rise once again, after a brief reprieve of no sudden, mysterious casualties. 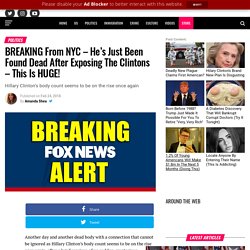 The latest is possibly the most shocking yet in the truly startling trail of dead bodies that keep accumulating around this crooked woman with major secrets she’s desperate to keep hidden no matter who has she has to kill off to ensure it. It didn’t take long for her latest victim to be found dead in his pricey New York City apartment by his 11-year-old daughter who discovered his death that’s strangely been ruled a “suicide” even though how it happened suggests otherwise.

In what’s being reported as a famous surgeon to the star’s unexpected suicide brought on by stress, the timing of his death after what he just exposed of Hillary’s cannot be ignored. Why would a wealthy, acclaimed trauma surgeon with three young daughters kill himself in a particularly gruesome manner in his home? SHE KNEW: NEW Hillary email reveals aide told her ‘All your info is on the server’ “It comes back to life once I plug in the charger,” the one-time “most qualified presidential candidate in the history of the world” wrote to her aides on the evening of January 30. 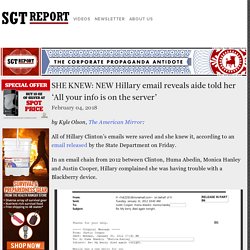 “Should I try a new battery or get a new one,” she wrote, apparently referring to a new device. “And, have we figured out to save all my info?” She ended. Trey Gowdy Reveals The TRUE Reason The FBI Let Hillary Off – This Is Disturbing > REAL NEWS PRESIDENT DONALD TRUMP. For months after it was announced that Hillary Clinton would not be facing an indictment over the careless mishandling of national security secrets over a private, unsecured server, Congressional leaders have expressed frustration over the reason the FBI let Clinton off the hook. 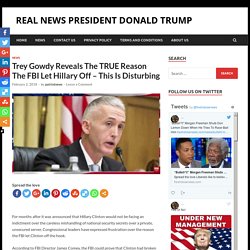 According to FBI Director James Comey, the FBI could prove that Clinton had broken the law, but they could not prove that she intended any harm in doing so. He explained that there was no precedence to this type of situation that could offer the agency guidance, and that there was no provable intent. Representative Trey Gowdy (R-SC) appeared on Fox News’ America’s Newsroom to explain exactly why this was the case. It has to do with the FBI seemingly not asking any questions with regards to intent. “There’s no question she handled [classified emails] negligently or extremely carelessly.He said he didn’t go forward with charges because she didn’t have specific criminal intent.I didn’t see any questions on that.”

Hillary Unplugged: Message "to all the activist bitches supporting bitches" by the inimitable - Democratic Underground. Did Russia Use Fusion GPS to Target Donald Trump? Earlier this week Sen. 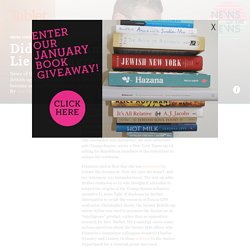 Feinstein said at first that she was pressured to release the document. Now she says she wasn’t, and her statement was misunderstood. Fusion GPS's ties to Clinton campaign, Russia investigation: What to know. From its connection to Hillary Clinton’s campaign to the publication of a graphic dossier about President Trump, Fusion GPS has become something of a major player in the Russia investigation. 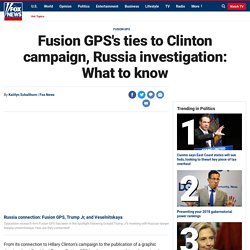 FBI officials worried about being too tough on Hillary Clinton during email investigation, texts show. FBI officials Peter Strzok and Lisa Page were concerned about being too tough on Democratic presidential candidate Hillary Clinton during the bureau’s investigation into her email practices because she might hold it against them as president, text messages released on Thursday indicated. Senate Judiciary Committee Chairman Chuck Grassley released new messages between bureau officials Page and Strzok, who were having an affair and exchanged more than 50,000 texts with each other during the election. “One more thing: she might be our next president,” Page texted Strzok on Feb. 25, 2016, in the midst of the presidential campaign, in reference to Clinton.

Senate Judiciary Committee Chairman Chuck Grassley released new messages between bureau officials Lisa Page and Peter Strzok, who were having an affair and exchanged more than 50,000 texts with each other. Evidence suggests a massive scandal is brewing at the FBI. During the financial crisis, the federal government bailed out banks it declared “too big to fail.” Fearing their bankruptcy might trigger economic Armageddon, the feds propped them up with taxpayer cash. Something similar is happening now at the FBI, with the Washington wagons circling the agency to protect it from charges of corruption.

This time, the appropriate tag line is “too big to believe.” Yet each day brings credible reports suggesting there is a massive scandal involving the top ranks of America’s premier law enforcement agency. The reports, which feature talk among agents of a “secret society” and suddenly missing text messages, point to the existence both of a cabal dedicated to defeating Donald Trump in 2016 and of a plan to let Hillary Clinton skate free in the classified email probe. If either one is true — and I believe both probably are — it would mean FBI leaders betrayed the nation by abusing their powers in a bid to pick the president. It is why I named him J. Hillary Clinton & Barack Obama Emails: Key to Lack of Clinton Indictment.

From the first, these columns have argued that the whitewash of the Hillary Clinton–emails caper was President Barack Obama’s call — not the FBI’s, and not the Justice Department’s. (See, e.g., here, here, and here.) The decision was inevitable. Obama, using a pseudonymous email account, had repeatedly communicated with Secretary Clinton over her private, non-secure email account. Hillary R. Clinton Part 01 of 17. Hillary’s America: The Secret History of the Democratic Party. N January 2015 a group of Haitians surrounded the New York offices of the Clinton Foundation. They chanted slogans, accusing Bill and Hillary Clinton of having robbed them of “billions of dollars.” Two months later, the Haitians were at it again, accusing the Clintons of duplicity, malfeasance, and theft. And in May 2015, they were back, this time outside New York’s Cipriani, where Bill Clinton received an award and collected a $500,000 check for his foundation.

“Clinton, where’s the money?” The Haitian signs read. Haitians like Andre may sound a bit strident, but he and the protesters had good reason to be disgruntled. The devastating effect of the earthquake on a very poor nation provoked worldwide concern and inspired an outpouring of aid money intended to rebuild Haiti. Haitians such as Andre, however, noticed that very little of this aid money actually got to poor people in Haiti. The Many Iterations of the Clinton Foundation – Patriots for Truth. Americans for Innovation Bill & Hillary Clinton incorporated the William J. Clinton Foundation in Arkansas, File No. 100152168. Since its inception, the foundation has operated and/or continues to operate under at least 30 “Fictitious Names” (Arkansas Secretary of State) including the names listed below.

FBI informant "threatened" after offering details linking Clinton Foundation to Russian bribery case. While the mainstream media has largely ignored it, the scandal surrounding Russian efforts to acquire 20% of America’s uranium reserves, a deal which was ultimately approved by the Obama administration, and more specifically the Committee on Foreign Investment in the United States (CFIUS) which included Hillary Clinton and Eric Holder, is becoming more problematic for Democrats by the hour. As The Hill pointed out earlier this morning, the latest development in this sordid tale revolves around a man that the FBI used as an informant back in 2009 and beyond to build a case against a Russian perpetrator who ultimately admitted to bribery, extortion and money laundering.

Hillary Clinton took $145M from Russians to sell out the U.S. uranium supply to America’s enemies (and the FBI knew all along) We have truly reached the point in American history where criminal indictments need to be immediately leveled against James Comey, Loretta Lynch, Eric Holder, Hillary Clinton, Bill Clinton, Robert Mueller and a dozen other high-ranking officials who are now known to have been complicit in one of the most treasonous criminal cover-ups in American history. Although the entire left-wing media is running a campaign of complete silence on this story, the rest of the media is now widely reporting that, under President Obama, the FBI had documented an exhaustive trail of corruption, bribery, and treason that involved Hillary Clinton, State Department corruption and Russia-linked mining companies that acquired rights to U.S. uranium supplies.