The prime minister, David Cameron, had committed an “obscene act with a dead pig’s head”, according to the Daily Mail. “A distinguished Oxford contemporary claims Cameron once took part in an outrageous initiation ceremony at a Piers Gaveston event, involving a dead pig,” the paper reported. Piers Gaveston is the name of a riotous Oxford university dining society; the authors of the story claimed their source was an MP, who said he had seen photographic evidence: “His extraordinary suggestion is that the future PM inserted a private part of his anatomy into the animal.” The story, extracted from a new biography of Cameron, sparked an immediate furore. It was gross, it was a great opportunity to humiliate an elitist prime minister, and many felt it rang true for a former member of the notorious Bullingdon Club.

Then, after a full day of online merriment, something shocking happened. Truth was the first casualty of the Great Depression. 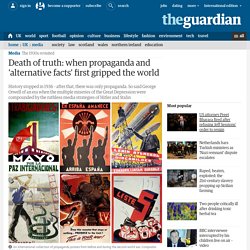 Reflecting the anguish of the time, propaganda was manufactured on an unprecedented scale. As economic disaster threatened to trigger shooting wars so, as George Orwell said, useful lies were preferred to harmful truths. He went further, declaring that history stopped in 1936; after that there was only propaganda. This was a characteristic exaggeration but it points to the universality of state deception. The very term Depression aimed to mislead: President Hoover employed it as a euphemism for the standard American word for financial crisis, “Panic”.

Of course, to lie is human, and official mendacity had been practised throughout the ages. Northcliffe’s efforts had dire consequences for Europe. But propaganda, like advertising, only strikes chords when the conditions are right. Even to mention the 1930s is to evoke the period when human civilisation entered its darkest, bloodiest chapter. 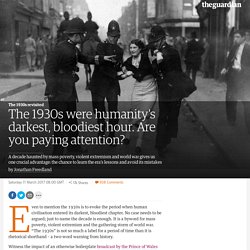 No case needs to be argued; just to name the decade is enough. It is a byword for mass poverty, violent extremism and the gathering storm of world war. “The 1930s” is not so much a label for a period of time than it is rhetorical shorthand – a two-word warning from history. Witness the impact of an otherwise boilerplate broadcast by the Prince of Wales last December that made headlines: “Prince Charles warns of return to the ‘dark days of the 1930s’ in Thought for the Day message.” Or consider the reflex response to reports that Donald Trump was to maintain his own private security force even once he had reached the White House.

Are Electronic Devices Are Ruining Our Sleep? Emma Watson at the HeForShe Campaign 2014 - Official UN Video. Truth is evaporating before our eyes. Given how little content the 2016 presidential debates contained, how rarely specific policies or programs were outlined or even mentioned, it often seemed that the only thing left for journalists – and ordinary citizens – to do was tally the number of lies each candidate told. 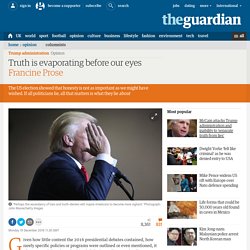 By some counts, Donald Trump told a lie every few minutes; Hillary Clinton’s distortions appear to have been fewer and less blatant. And when the bigger liar won the election, one conclusion to be drawn was that, for millions of Americans, honesty was not nearly so important as we might have wished or assumed. If we factor in the popular assumption that all politicians lie, perhaps all that mattered was what they lied about.

Who cared if Trump denied sexually harassing women when he was so boldly telling the truth about the fear, rage, racism, xenophobia and misogyny that many of his supporters felt but had hesitated to voice? Perhaps this vigilance will make us braver about speaking up, speaking out. Europe's biggest paper ran a bogus refugee 'sex mob' story. What now? It was tailor-made for the anti-immigration press: a crazed man wearing a suicide vest “filled with gasoline and gunpowder” enters a supermarket in a small town in northwestern Spain, shouts “Allahu Akbar!” 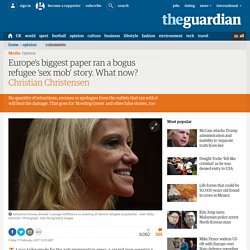 And opens fire. Mercifully, no one is killed, but customers flee in terror. The story runs in a local paper, is quickly picked up by an assortment of media in the US and the UK, and then shared widely on Twitter and Facebook. Anti-Muslim figures claim, with heads shaking in sage disapproval, that the attack symbolizes everything that is wrong with Islam. One small problem: it didn’t happen. Yes, a man did enter a supermarket in the town of Ourense and fired shots. WRITING ESSAYS. What would happen if you didn’t sleep? - Claudia Aguirre. Writers and speakers have given into the allure of the ease of using terms like good and bad in their works. 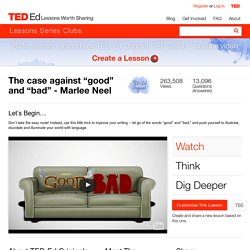 Find five examples from different works (plays, speeches, television commercials, etc.), in which good and/or bad have been used. The Case Against "Good" and "Bad" What is verbal irony? - Christopher Warner. When to use "me", "myself" and "I" - Emma Bryce. AMERICAN Literature. Does grammar matter? - Andreea S. Calude.

Mini BIO - Edgar Allan Poe. A host of heroes - April Gudenrath. How did English evolve? - Kate Gardoqui. Lessons. Log In. We have been seeing this change in popular culture and in higher education over the course of the last decades. 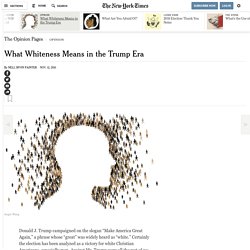 Black and brown and Asian people sell you financial instruments and clothing. The president and first lady are black. Your college literature course includes Toni Morrison and Junot Díaz. But if you haven’t gone to college, where multiculturalism has been making its way for a generation, and if your version of America was formed in school in the 20th century, and that 20th-century image remains in your consciousness, you may have a lot to lose. In our racially oriented American society, this change marks a demotion for white people. In the Trump administration, white men will be in charge (virtually his entire transition team, and practically every name offered for a potential cabinet post, is a white man). Mr. Conveniently, for most white Americans, being white has meant not having a racial identity. What happens if Mr. Continue reading the main story. Of Mice and Men. Bilingual fish. Funny translation :P must watch:P.