Muslim woman dragged on ground by her hijab in east London assault. A young Muslim woman was forced to the ground in a busy shopping precinct and dragged along by her hijab by two men in what police are treating as a racist attack. 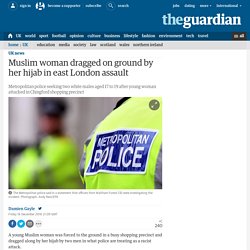 The woman, who police said was in her 20s, was walking alone in Chingford, east London, when the two men dressed in black approached her, tried to pull off her headscarf and pushed her to the ground. She reportedly said she was then dragged along the ground during the struggle. Police said the attackers, described as two white males aged 17 to 19, ran off north along Old Church Road. Witnesses told the Evening Standard the victim was lying on the pavement for almost 20 minutes after the attack, before managing to call police and limp to a nearby Turkish restaurant, where she was helped by staff. Koksal Zeyek, 40, the owner of Fes restaurant on Old Church Road, said his staff first noticed the woman sitting on a table outside. “I held her hand and I helped her to walk in and she called the police and ambulance,” he said. The rise of militias: Patriot candidates are now getting elected in Oregon. Joseph Rice’s manner is a long way from militia stereotypes. 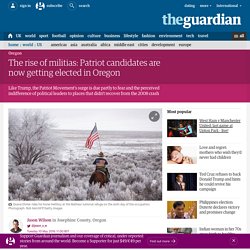 The Patriot Movement leader does not present as a crazed gun nut, nor as a blowhard white supremacist. He’s genial, folksy, and matter-of-fact in laying out his views. But talk to him for long enough, and time and again the Patriot Movement leader returns to what really drives him: land. Rice is running for Josephine county commissioner in south-west Oregon, and believes that the federal government’s current role in land management is illegitimate and even tyrannical. His campaign is well-advertised around the county and appears well-organised.

He has positions on education (kids should finish high school), legalised marijuana (it presents an economic opportunity) and Donald Trump (“people are tired of career politicians, and they know the country’s in trouble”). But county supremacy is what really drives him. In Pictures: Remembering John Lennon on his 75th birthday - BBC News. News navigation Sections Advertisement Liverpool is sponsored by is sponsored by. 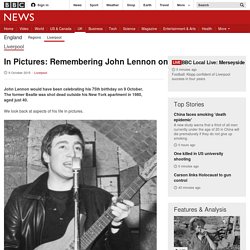 Why do some mass shootings make the news and some don't? - BBC News. Image copyright Google Last week, a gunman killed nine people at a community college in Oregon. 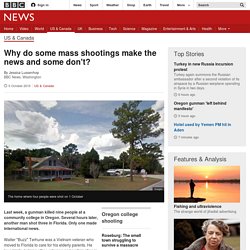 Several hours later, another man shot three in Florida. Only one made international news. Walter "Buzz" Terhune was a Vietnam veteran who moved to Florida to care for his elderly parents. He loved kids, helping other veterans and participating in civic life in tiny Inglis, a commercial fishing town near Florida's west coast. Selfie-crazed tourists prevent sea turtles from nesting in Costa Rica - Trending. If you're thinking of taking a few days to do some ecotourism in Costa Rica during your next vacation down south, the country's government has a message for you: Please be respectful. 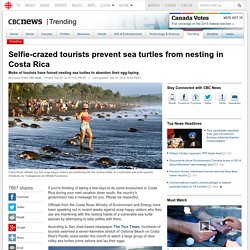 Officials from the Costa Rican Ministry of Environment and Energy have been speaking out in recent weeks against snap-happy visitors who they say are interfering with the nesting habits of a vulnerable sea turtle species by attempting to take selfies with them. According to San José-based newspaper The Tico Times, hundreds of tourists swarmed a seven-kilometre stretch of Ostional Beach on Costa Rica's Pacific coast earlier this month to watch a large group of olive ridley sea turtles come ashore and lay their eggs.

Australian farmers fight huge mine in Liverpool Plans, NSW - BBC News. Coal and gas mining continue to encroach on some of Australia's best farmland, pitting miners against farmers and creating a deep rift between the parties of the nation's ruling Conservative coalition. 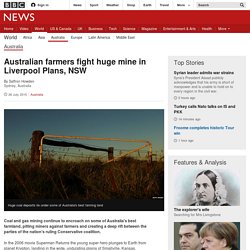 In the 2006 movie Superman Returns the young super hero plunges to Earth from planet Krypton, landing in the wide, undulating plains of Smallville, Kansas. His spacecraft pierces the region's rich black soils and - so the story goes - Superman is raised on this sweeping farmland where he learns to run and jump and fly.

A decade on from the filming of the Hollywood blockbuster, the real life location - Breeza on the Liverpool Plains of rural New South Wales - is bracing itself not against kryptonite but against coal. Massive mine Earlier this month, Chinese company Shenhua received Australian government approval for a massive open-cut coal mine three kilometres from tiny Breeza. It will operate 24 hours a day, seven days a week over its 30-year life span. Iconic. Who is burning black churches? Twitter activists think they know - BBC News. A small group of activists pushed the burning of black churches in the American south onto the news agenda, although it's unclear whether the incidents are linked or what the motivation is behind them. 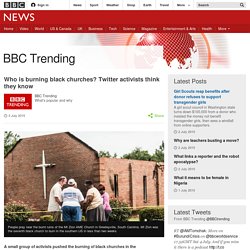 Who killed Alberto Nisman? - BBC News. In January a high-profile prosecutor was found in a pool of blood in his bathroom, days before he was due to release a report condemning the Argentine government. 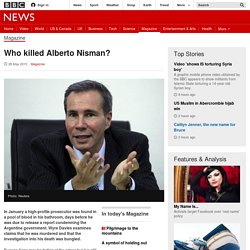 Wyre Davies examines claims that he was murdered and that the investigation into his death was bungled. Buenos Aires may be fading at the edges but it is still one of the world's great capitals - witness to some of the most tragic and momentous events in Argentine history. It is a city where military generals have justified coups d'etats, where grandmothers have marched in defiance against tyranny and where populist icons have vainly tried to unite a divided nation. Even today, intrigue and political scandal are never too far below the surface. Cleveland policeman Brelo cleared over car shooting deaths - BBC News. A US policeman who climbed on to a car bonnet and fired repeatedly through the windscreen at unarmed black occupants has been cleared of all charges. 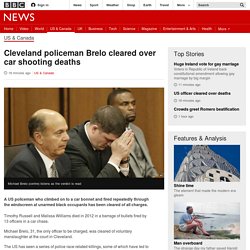 Timothy Russell and Malissa Williams died in 2012 in a barrage of bullets fired by 13 officers in a car chase. Michael Brelo, 31, the only officer to be charged, was cleared of voluntary manslaughter at the court in Cleveland. The US has seen a series of police race-related killings, some of which have led to serious civil unrest. In Cleveland itself, the police shooting last November of a 12-year-old black boy, Tamir Rice, as he waved a replica firearm, fuelled the national debate over police use of deadly force. Community and city leaders were braced for possible unrest over the latest ruling.

Some 30 protesters gathered outside the cordoned-off courthouse, some chanting "hands up, don't shoot! " OnLive gaming service to switch off after Sony deal - BBC News. Video game streaming pioneer OnLive is to shut down after selling several of its patents to Sony. 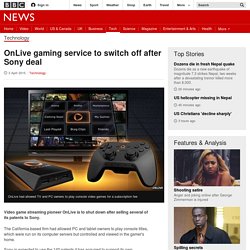 The California-based firm had allowed PC and tablet owners to play console titles, which were run on its computer servers but controlled and viewed in the gamer's home. Sony is expected to use the 140 patents it has acquired to support its own PlayStation Now streaming service. OnLive was once valued at $1.8bn (£1.2bn). The terms of the deal have not been disclosed. Too Many People in Jail? Abolish Bail. Photo CHICAGO — HOW can we reduce the enormous populations of our country’s local jails? Last month, Mayor Bill de Blasio of New York unveiled a plan to decrease the population of the Rikers Island jail complex by reducing the backlog of cases in state courts. Uber Seeks to Raise Up to $2 Billion in New Funding.