Bollywood's Shah Rukh Khan faces 'baby sex test' inquiry. 17 June 2013Last updated at 13:22 ET Khan and his wife have said nothing about the reports Health officials in India are investigating reports that top Bollywood star Shah Rukh Khan knows he and his wife are expecting a baby boy. 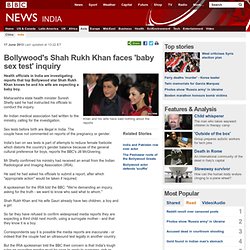 Maharashtra state health minister Suresh Shetty said he had instructed his officials to conduct the inquiry. An Indian medical association had written to the ministry, calling for the investigation. Sex tests before birth are illegal in India. India's ban on sex tests is part of attempts to reduce female foeticide which distorts the country's gender balance because of the general cultural preference for boys, reports the BBC's Jill McGivering.

Mr Shetty confirmed his ministry had received an email from the Indian Radiological and Imaging Association (IRIA). He said he had asked his officials to submit a report, after which "appropriate action" would be taken if required. Witchcraft accusations – Still killing women over 300 years later. India's 'wedding detectives' enjoy booming trade. A growing number of Indians are hiring private detectives to check up on a prospective bride or groom's character, sexual history and finances before marriage. 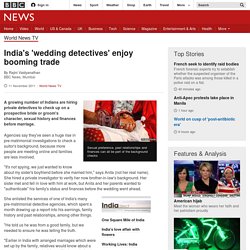 Agencies say they've seen a huge rise in pre-matrimonial investigations to check a suitor's background, because more people are meeting online and families are less involved. "It's not spying, we just wanted to know about my sister's boyfriend before she married him," says Anita (not her real name). She hired a private investigator to verify her now brother-in-law's background. Her sister met and fell in love with him at work, but Anita and her parents wanted to "authenticate" his family's status and finances before the wedding went ahead. She enlisted the services of one of India's many pre-matrimonial detective agencies, which spent a month drawing up a report into his earnings, family history and past relationships, among other things. Slim in Sudan: Female fleshiness loses its allure. For centuries, female fleshiness has been prized in Sudan, with women encouraged to be plump. 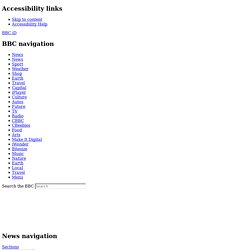 But many Sudanese women now aspire to being slim - and gyms are taking off in a big way. Inside a large sweaty hall, about 20 women are taking an aerobics class. Why are Indian women being attacked on social media? 7 May 2013Last updated at 20:49 ET By Divya Arya BBC Hindi, Delhi Sagarika Ghose has stopped giving her views on Twitter. 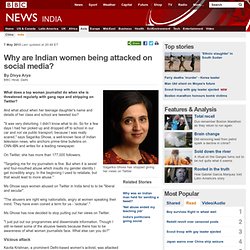 Amina Tyler: Topless Tunisian Protester Tells Femen She Was Beaten, Kidnapped & Drugged By Her Family. Tunisian activist Amina Tyler has revealed she was beaten, kidnapped and drugged by her family after posting pictures of herself baring her breasts online. 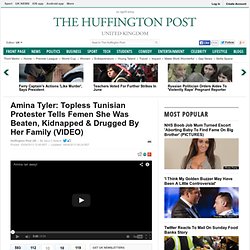 The 19-year-old was also forced to endure a humiliating “virginity test” in the aftermath of her protest, which inspired women’s movement Femen to organise a “topless jihad” in support of her. Speaking to Femen leader Inna Shevchenko from an undisclosed location via Skype, she told her harrowing story, but was adamant she will continue her struggle for women's rights in the Muslim country. Why spend $250,000 on a gold shirt? 14 April 2013Last updated at 19:27 ET By Rajini Vaidyanathan BBC News, Mumbai An Indian man has bought one of the world's most expensive shirts, made with more than 3kg of gold and worth $250,000. 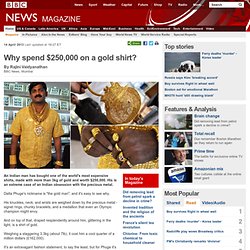 His is an extreme case of an Indian obsession with the precious metal. Datta Phuge's nickname is "the gold man", and it's easy to see why. His knuckles, neck, and wrists are weighed down by the precious metal - signet rings, chunky bracelets, and a medallion that even an Olympic champion might envy. Indian Girl Who Reported Rape Threatened With Stoning After Being Placed Behind Bars.

A 10-year-old Indian girl has been threatened with death-by-stoning if she doesn't withdraw her case against an older man of a higher caste, the Indian Express reported Thursday. 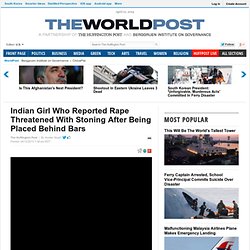 Neglect of the weak was not invented with the National Health Service. We all know the routine. 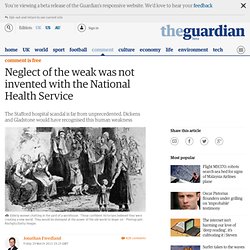 The inquiry into a grim episode in our national life reports, offering a list of recommendations. The government responds, vowing to learn the lessons and to ensure nothing like it ever happens again. This week it was Jeremy Hunt's turn, the health secretary giving the government's initial reaction to the second of two Francis reports relating to the scandal at Stafford hospital – and the fifth such investigation into the appalling neglect and abuse of patients that occurred there. Both Hunt and the report's author, Robert Francis QC, spoke of the need to change "the culture of the NHS", the politician promising a culture of "zero harm".

Afghanistan's Bride Price: The Misnomer Of The Mahr. A Family Affair Zeba is 23 years old, sitting calmly in a green silk dress, adorned with gold jewelry and a sheer scarf revealing her curled, light-brown hair. 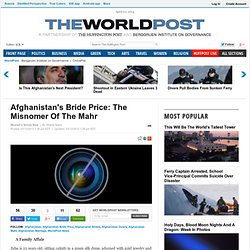 She whispers a joke to her younger sister, who laughs loudly and calls over to their preoccupied mother, busy entertaining three of more than 300 guests attending Zeba’s wedding to Jamshid, a 25-year-old aspiring pharmacist. The women’s section of the wedding hall is covered in pink and white rose petals and large tulips imported from India.

Making Fun Of People Who Oppose Gay Rights Just Got A Whole Lot Easier. Untitled. CAIRO — In the weeks after a group of men surrounded and sexually assaulted her in Cairo’s iconic Tahrir Square, Yasmine Faithi has returned repeatedly to the place where the nearly hourlong attack began. 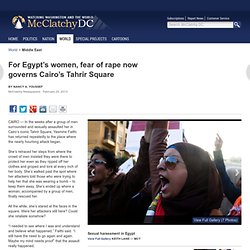 She’s retraced her steps from where the crowd of men insisted they were there to protect her even as they ripped off her clothes and groped and tore at every inch of her body. Facial structure may predict endorsement of racial prejudice. The structure of a man's face may indicate his tendency to express racially prejudiced beliefs, according to new research published in Psychological Science, a journal of the Association for Psychological Science. Studies have shown that facial width-to-height ratio (fWHR) is associated with testosterone-related behaviors, which some researchers have linked with aggression. But psychological scientist Eric Hehman of Dartmouth College and colleagues at the University of Delaware speculated that these behaviors may have more to do with social dominance than outright aggression.

Creationism. Of all the forms of Bad Archaeology, creationism is perhaps the worst: its practitioners are frequently not of the honest-but-deluded category but are cynical manipulators whose principal interest is in the power they wield over their disciples and congregations. The Old South's Last, Desperate Stand. In understanding the polarization and paralysis that afflict national politics in the United States, it is a mistake to think in terms of left and right. The appropriate directions are North and South. To be specific, the long, drawn-out, agonizing identity crisis of white Southerners is having effects that reverberate throughout our federal union. The transmission mechanism is the Republican Party, an originally Northern party that has now replaced the Southern wing of the Democratic Party as the vehicle for the dwindling white Southern tribe.

As someone whose white Southern ancestors go back to the 17th century in the Chesapeake Bay region, I have some insight into the psychology of the tribe. The salient fact to bear in mind is that the historical experience of the white South in many ways is the opposite of the experience of the rest of the country. Boyfriends for hire to beat China's wedding pressure. 6 February 2013Last updated at 21:07 ET By Celia Hatton BBC News, Beijing Even a fake boyfriend may help stave off marriage nagging from concerned relatives There are just days to go before Chinese New Year, the biggest celebration on China's calendar, when the entire country shuts down for a few days of food, fireworks… and family. Japan's Scientific Whaling: An Expensive Proposition.

TOKYO—Japan's scientific whaling effort has cost taxpayers $378 million since 1987, even as demand for whale meat has shrunk and the research has proven of little value, according to a report released here on 5 February by the International Fund for Animal Welfare (IFAW). A moratorium has suspended commercial whaling since 1986, but a clause in the International Whaling Commission (IWC) convention allows countries to hunt whales for research purposes. Salaka Djicke, Mali Woman, Punished For Forbidden Love. How the Hell Did Zimbabwe End Up with Just $217 In the Bank?

Last week, the Zimbabwean government announced that after paying public workers’ salaries, its bank balance is sitting at a pitiful $217. Hidden world of female genital mutilation in the UK. 23 July 2012Last updated at 07:22 ET By Sue Lloyd Roberts BBC Newsnight. Artist Rosea Lake Goes Viral With Photo About Sexism And Skirt Length. Will South Africans ever be shocked by rape? 10 January 2013Last updated at 08:04 ET. In rural India, rapes are common, but justice for victims is not.

The girls stolen from the streets of India. 8 January 2013Last updated at 19:12 ET By Natalia Antelava BBC World Service, Delhi. Five Federal Policies on Guns You’ve Never Heard Of. Here, we outline five federal policies relating to guns you may not have known about: Laws Penalizing Blasphemy, Apostasy and Defamation of Religion are Widespread. Several recent incidents have drawn international attention to laws and policies prohibiting blasphemy – remarks or actions considered to be contemptuous of God or the divine.