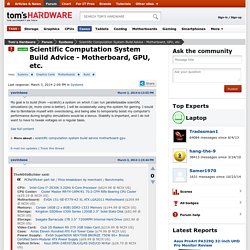 For scientific use- MATLAB for example, for error-free statistical and simulation - precise waveforms, graphs, the best results are obtained with ECC error-correcting RAM, requiring a Xeon CPU, and suitable motherboard. As Xeons are designed for long periods of continuous use they have locked multipliers and can not be overclocked significantly. I think there is some latitude to raise the voltages, but there goes the design reliability.

ECC RAM does continuous parity checks and so the latency is lower than for gaming RAM. As for GPU's, if your software uses viewports, a Quadro or Firepro is necessary to run the special drivers. H80 / H80i / H90 / H100 / H100i / H110 Case Compatibility Thread (Page 1 for full listings) ***NOTE - REFERENCE H80i & H100i COOLERS*** Please Read I will now include the new "i" Series coolers. 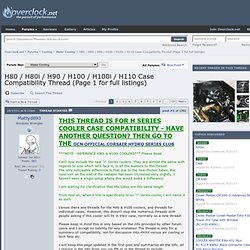 They are almost the same with regards to size which let's face it, is all the matters to this thread. The only noticeable difference is that due to the new thicker tubes, the reservoir on the end of the radiator has been increased very slightly. I haven't seen a single setup where this would make a difference. I am waiting for clarification that the tubes are the same length. From now on, when a link is specifically to an "i" series cooler, I will name it as such. *PICS* Corsair H100 in 600T. Best CPU Cooler Roundup Review Feat. Corsair, Cooler Master, Noctua, Phanteks, Zalman. Navigation: A Closer Look Corsair H100i Here’s a look at the Corsair H00i. 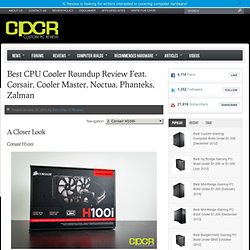 Overclocking. Overclocking is the process of making a computer or component operate faster than the clock frequency specified by the manufacturer by modifying system parameters (hence the name "overclocking"). 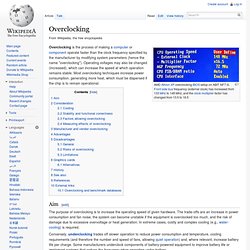 Operating voltages may also be changed (increased), which can increase the speed at which operation remains stable. Most overclocking techniques increase power consumption, generating more heat, which must be dispersed if the chip is to remain operational. Aim[edit] The purpose of overclocking is to increase the operating speed of given hardware. The trade-offs are an increase in power consumption and fan noise, the system can become unstable if the equipment is overclocked too much, and the risk of damage due to excessive overvoltage or heat generation. Many people overclock their hardware to improve its performance. 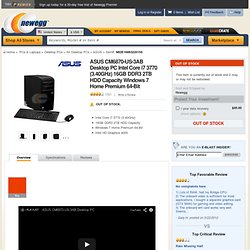 Cons: I've found this computer will randomly lock up - meaning suddenly, completely unable to do ANYTHING. Hard boot is the only option. This can be anywhere from once a week to several times a day, and often happens when there is no activity (by user) for several hours. Or it can be in the middle of doing anything. HP Pavilion 27xi Review & Rating. There's something about a frame with no bezel that catches your eye, which is one reason why we're starting to see more and more monitors sporting the "floating screen" design. 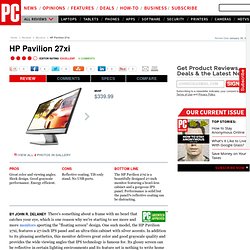 One such model, the HP Pavilion 27xi, features a 27-inch IPS panel and an ultra-thin cabinet with silver accents. In addition to its pleasing aesthetics, this monitor delivers great color and good grayscale quality and provides the wide viewing angles that IPS technology is famous for. Its glossy screen can be reflective in certain lighting environments and its feature set is nothing to write home about, but at $340 it's a good deal for a big-screen monitor that offers both style and performance. Intel Core i7-3770K Ivy Bridge 3.5GHz (3.9GHz Turbo) LGA 1155 77W Quad-Core Desktop Processor Intel HD Graphics 4000 BX80637I73770K.

Once again Intel sets the pace in competition for performance and power efficiency with the 3rd Generation Intel Core processors, codenamed Ivy Bridge. 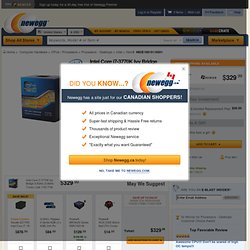 Built on the market-leading previous generation Sandy Bridge architecture, the state-of-the-art Ivy Bridge not only continues the excellence in all aspects with Intel Hyper-Threading technology, Turbo Boost Technology 2.0 and Smart Cache, but pushes the pace a step farther with groundbreaking 22nm 3D transistor technology, which delivers an unprecedented combination of performance and power efficiency, and a couple of key refinement. The built-in visual is another leap offering you enhanced media and graphics. The Ivy Bridge IGP also supports DirectX 11 and OpenCL 1.1 to deliver incredibly detailed gaming and better heterogeneous computing performance. Intel 22nm 3-D Transistor The 3rd Generation Intel Core processors employ the world's first 3-D transistor manufactured at 22nm.