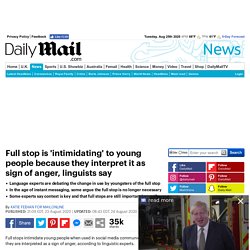 Teenagers and those in their early twenties, classified as Generation Z, have grown up with smartphones which they use to send short messages without full stops. Mind your language: is it ever OK to correct someone's grammar? After Sunday’s episode of reality TV drama 90 Day Fiancé, people were left with an important question: is it ever OK to correct someone’s grammar? 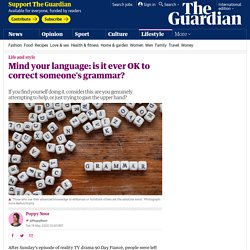 The show follows long-distance couples in a pressure cooker: when the foreign lovers of American citizens move to the US, with just 90 days to decide whether to get married before their visas run out. Sunday’s episode saw couple Stephanie Matto and Erika Owens hash out what went wrong in their failed relationship, and some viewers suggested that a screenshot showing an exchange between them might sum their problems up. Michael Gove's grammar: former education minister is gonna rue the day he used Nonstandard English. Tensions are running high. 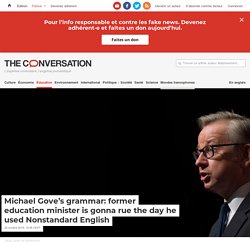 The battle for Brexit is reaching its climax. The need for government ministers to sound decisive and determined is tantamount. So why does government minister Michael Gove suddenly sound like he’s speaking in someone else’s voice? In a recent interview with BBC Politics Live, the host Andrew Neil asked Michael Gove what the government would do if Labour succeeded in getting a referendum amendment attached to the deal. BBC Radio 4 - The 'Apostrophiser' Pedants have their uses, but why such fury over apostrophes?

Whatever persuaded Bristol’s self-styled “grammar vigilante” to be interviewed by Radio 4, subsequent public acclaim has presumably justified the risk of prosecution for criminal damage. 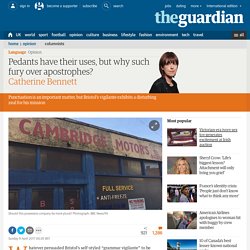 For anyone who missed the show, this anonymous individual has spent the past 13 years defacing shop signs under cover of darkness. His excuse is that he is improving them, by removing redundant apostrophes and supplying missing ones, using a two-pronged “apostrophiser” he designed for that purpose. What grammar pedants and fashion victims have in common. Language pedants who take pleasure in policing other people’s use of grammar often have an air of respectability about them, but it’s usually a sheen hiding something more pernicious. 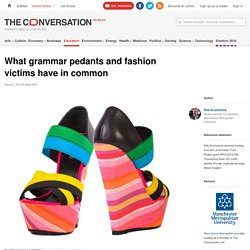 Rather than actual rules of language, pedantry deals in half-truths, conventions and arbitrary shibboleths which are too often used to embarrass or undermine. Remember this if you get pounced upon by a pedant on National Grammar Day. People often liken the idea of wearing smart clothes to a job interview with the idea of using a particular type of “smart” or formal language.

But this analogy can go further: I would argue that many of the conventions that so upset the language pedants (split infinitives or insisting on “whom”) are often no less arbitrary than fashion conventions. If your shoes and handbag don’t match, both items will still be entirely practical. Split infinitives and matching socks There is nothing wrong with having a preferences in clothes or in language. Youth speak. A Word, Please: He or she may be happier with 'they' - Glendale News-Press. Dear Ms Morgan: in grammar there isn’t always one right answer. Steven Pinker: 'Many of the alleged rules of writing are actually superstitions' People often ask me why I followed my 2011 book on the history of violence, The Better Angels of Our Nature, with a writing style manual. 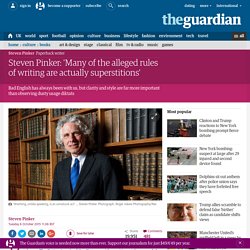 I like to say that after having written 800 pages on torture, rape, world war, and genocide, it was time to take on some really controversial topics like fused participles, dangling modifiers, and the serial comma. It’s not much of an exaggeration. After two decades of writing popular books and articles about language, I’ve learned that people have strong opinions on the quality of writing today, with almost everyone finding it deplorable. I’ve also come to realise that people are confused about what exactly they should deplore. Outrage at mispunctuation gets blended with complaints about bureaucratese and academese, which are conflated with disgust at politicians’ evasions, which in turn are merged with umbrage at an endless list of solecisms, blunders, and peeves. Steven Pinker: Using Grammar as a Tool, Not as a Weapon.

Steven Pinker: 10 'grammar rules' it's OK to break (sometimes) Among the many challenges of writing is dealing with rules of correct usage: whether to worry about split infinitives, fused participles, and the meanings of words such as "fortuitous", "decimate" and "comprise". 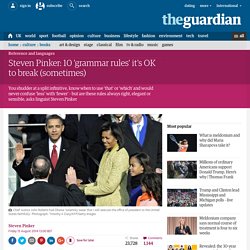 Supposedly a writer has to choose between two radically different approaches to these rules. Prescriptivists prescribe how language ought to be used. They uphold standards of excellence and a respect for the best of our civilisation, and are a bulwark against relativism, vulgar populism and the dumbing down of literate culture. Descriptivists describe how language actually is used.

They believe that the rules of correct usage are nothing more than the secret handshake of the ruling class, designed to keep the masses in their place. Pronouns and the march of gender diversity. Strictly English: Part one. One should take care in using the verb contradict. 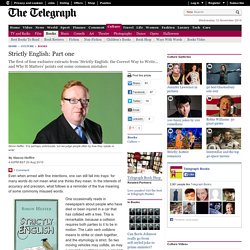 They Say You Should Break This Grammar Rule. Apostrophe now: Bad grammar and the people who hate it. 13 May 2013Last updated at 04:58 ET By Tom de Castella BBC News Magazine Children are again to be subject to a rigorous examination in grammar. 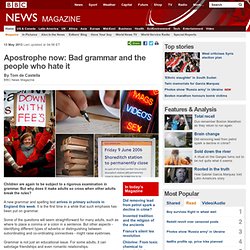 Spelling it out: is it time English speakers loosened up? I can’t remember exactly how often spelling tests happened at school – maybe every week or two – but I do remember I looked forward to them. 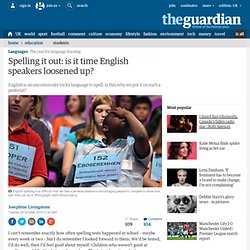 We’d be tested, I’d do well, then I’d feel good about myself. Jeremy Paxman and the truth of the Apostrophe. There Is No ‘Proper English’ It’s a perpetual lament: The purity of the English language is under assault. These days we are told that our ever-texting teenagers can’t express themselves in grammatical sentences. The media delight in publicizing ostensibly incorrect usage. A few weeks ago, pundits and columnists lauded a Wikipedia editor in San Jose, Calif., who had rooted out and changed no fewer than 47,000 instances where contributors to the online encyclopedia had written “comprised of” rather than “composed of.” Does anyone doubt that our mother tongue is in deep decline?

Well, for one, I do. As children, we all have the instinct to acquire a set of rules and to apply them. Think Grammar Doesn't Matter? It Could Be Holding You Back From a Promotion  Quality writing can help you get ahead in your career, but the opposite is also true. If you want to get ahead in the workplace, change careers, or find a job, then it's time to dust off that dictionary, thumb through your thesaurus, and get a grip on grammar. Grammarly reviewed 100 LinkedIn profiles of native English-speakers in the consumer packaged goods industry. Modern tribes: the grammar pedant. Fewer. Not less, F-E-W-E-R. Because it matters – God, this is why they should bring back grammar lessons.

Fewer is for things you count, less is for, well, things you don’t count. Like mud. No, it’s not OK to say less than 10 miles. Plain English Campaign.