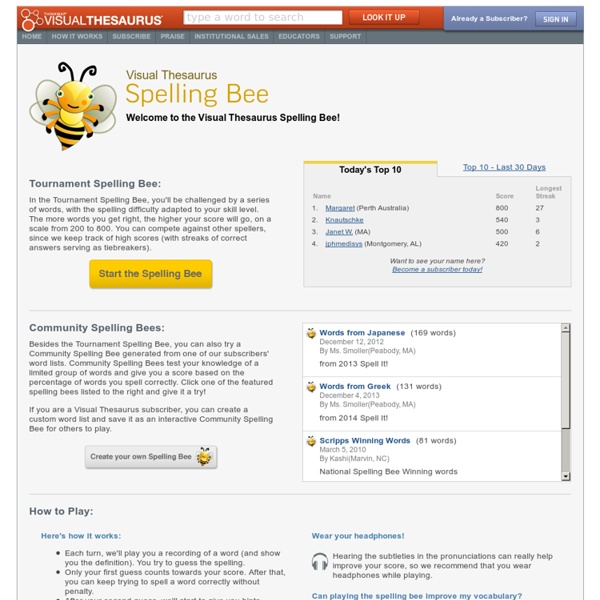 Games Crossword GameJust like an old-fashioned word search! Using the mouse and the wordlist, find and highlight the hidden English words in the box! As the levels get harder, the words start appearing in different orientations. Scientist discover their first biofluorescent turtle While filming small sharks and coral reefs in the Solomon Islands in the South Pacific, marine biologists had a stunning encounter with a "glowing" sea turtle. Scientists captured footage of a hawkbill sea turtle emitting neon green and red light. The discovery was made in late July by David Gruber of the City University of New York and his team. The footage was released for the first time on Monday. Gruber, an emerging explorer for National Geographic, described the turtle as an alien spaceship when he initially saw it swimming in the water.

Creative Writing Prompts Write a scene that includes a character speaking a different language, speaking in a thick accent, or otherwise speaking in a way that is unintelligibe to the other characters. (Note: You don't necessarily need to know the language the character is speaking—be creative with it!) Describe a character's reaction to something without explaining what it is. See if your fellow prompt responders can guess what it is. Write a story or a scene about one character playing a prank on another. Describe the scene from both characters' points of view.

What's Eyejot? Eyejot is the first, comprehensive, client-free online video messaging platform ideal for both personal and business communications. It offers everyone the ability to create and receive video messages in a self-contained, spam-free environment. With no client to install, you can start using Eyejot immediately with any browser, on any platform. It even features built-in support for iTunes™ (and iPods&trade), mobile devices and social networks like MySpace™. Watch Eyejot video examples.

Synonym Card Game There are 30 pairs of synonyms here (for a total of 60 cards) that can be used to play the games Fish and Memory. Students have to find the synonym card to the one that they have. The synonym pairs covered here are: large/big, tiny/small, noisy/loud, silent/quiet, quick/fast, sick/ill, leap/jump, push/shove, pull/tug, sprint/run, afraid/scared, spooky/scary, cold/chilly, home/house, rock/stone, garbage/trash, rug/carpet, kid/child, clever/smart, happy/glad, street/road, and throw/toss. You can use the game Fish or memory to practice this game.

Text Structure Text Structure The term “text structure” refers to how information is organized in a passage. The structure of a text can change multiple times in a work and even within a paragraph. Students are often required to identify text structures on state reading tests; therefore, it is important that they are given exposure to the various patterns of organization. This page will briefly explain seven commonly used patterns of organization, provide examples, and then offer users free text structure worksheets and interactive online practice activities to help students learn this essential reading skill. Cause and Effect:The results of something are explained.Example: The dodo bird used to roam in large flocks across America. Images - Clip Art, Photos, Sounds, & Animations Insert clip art In the newer versions of Office, there's no longer a clip art library, but Office still helps you insert clip art. STEP 1: Select Insert > Online Pictures (In Outlook, when you're using the Reading pane, there isn't an Insert menu. Click Pop Out and then you'll see the Insert menu.)

Word Scramble Maker Enter words in the box below. A maximum of 32 words will fit on one page. To make it easier, use a capital first letter.