Practices and Exercises on Points of English Grammar (ESL/EFL) 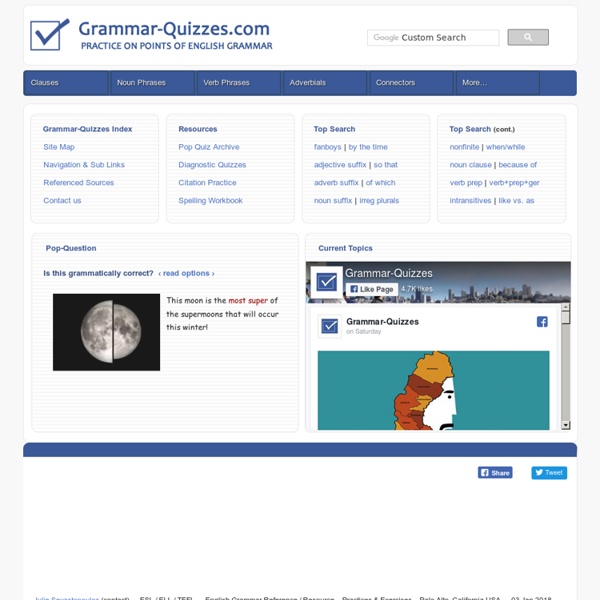 Cases of Nouns and Pronouns Definition Nouns and pronouns in English are said to display case according to their function in the sentence. They can be subjective or nominative (which means they act as the subject of independent or dependent clauses), possessive (which means they show possession of something else), or objective (which means they function as the recipient of action or are the object of a preposition). Except for the possessive forms (usually formed by the addition of an apostrophe and the letter s), nouns do not change form in English. (This is one of the few ways in which English is easier than other languages.)

Explanations, Examples, Exercises in English grammar for ESL students and teachers JOIN THE ESLgold COMMUNITY We will enter you into the drawing for the iPod on Dec 31st and add you to our monthly newsletter. Welcome! Skills ESL Quizzes Welcome to EnglishClub ESL Quizzes, where you can test your knowledge of English with a quiz and have fun at the same time! There are quizzes for all levels - on grammar, pronunciation and vocabulary. Go ahead! Check your level, and see if you can beat the Quiz Master! Phrasal Verb Dictionary To look up a phrasal verb, click a letter in the menu. The formats below are used in phrasal verb definitions.separable verbs: (talk * into)inseparable verbs: (run into +)object can be in both positions: (look * up +) 1. Faulty Pronoun Reference © 2006, 2000 Margaret L. Benner All rights reserved. Before you can begin to study pronoun case, you must first know what a pronoun is and what the personal pronouns are.

Grammar Focus: For/since English Remove this ad Login See more See less English Grammar - Indirect questions Form and meaning If we do not begin a question directly, but begin it with something like Can you tell me...? Do you know...? I wonder if...? the word order is the same as in an affirmative statement. Gerunds and Infinitives What is a Gerund? A gerund (often known as an -ing word) is a noun formed from a verb by adding -ing. See also Nouns/Gerund. Sentence Subjects The subject of a sentence is the person, place, thing, or idea that is doing or being something. You can find the subject of a sentence if you can find the verb. Ask the question, "Who or what 'verbs' or 'verbed'?"