We Just Created an Artificial Synapse That Can Learn Autonomously 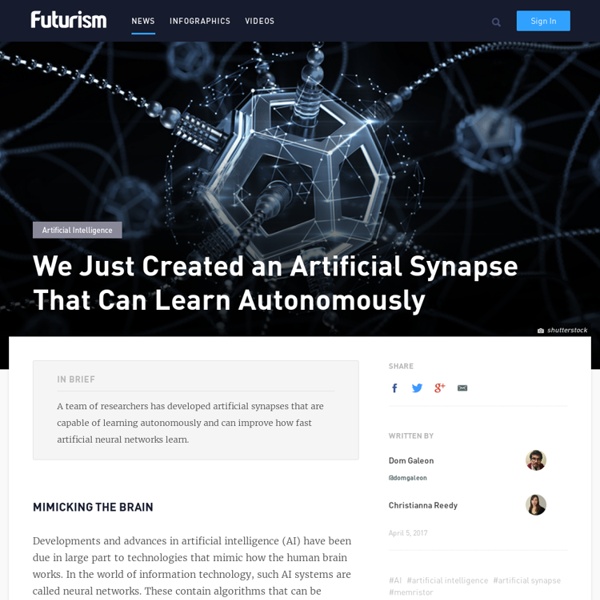 In Brief A team of researchers has developed artificial synapses that are capable of learning autonomously and can improve how fast artificial neural networks learn. Mimicking the Brain Developments and advances in artificial intelligence (AI) have been due in large part to technologies that mimic how the human brain works. In the world of information technology, such AI systems are called neural networks. These contain algorithms that can be trained, among other things, to imitate how the brain recognizes speech and images. Now, researchers from the National Center for Scientific Research (CNRS) in Thales, the University of Bordeaux in Paris-Sud, and Evry have developed an artificial synapse called a memristor directly on a chip. In the human brain, synapses work as connections between neurons. Better AI AI systems have developed considerably in the past couple of years. Soon, we may have AI systems that can learn as well as our brains can — or even better.

Separating Science Fact From Science Hype: How Far off Is the Singularity? The term “artificial intelligence” was only just coined about 60 years ago, but today, we have no shortage of experts pondering the future of AI. Chief amongst the topics considered is the technological singularity, a moment when machines reach a level of intelligence that exceeds that of humans. While currently confined to science fiction, the singularity no longer seems beyond the realm of possibility. From larger tech companies like Google and IBM to dozens of smaller startups, some of the smartest people in the world are dedicated to advancing the fields of AI and robotics. Now, we have human-looking robots that can hold a conversation, read emotions — or at least try to — and engage in one type of work or another.

Will artificial intelligence become conscious? Subhash Kak, Oklahoma State University Forget about today’s modest incremental advances in artificial intelligence, such as the increasing abilities of cars to drive themselves. Waiting in the wings might be a groundbreaking development: a machine that is aware of itself and its surroundings, and that could take in and process massive amounts of data in real time. It could be sent on dangerous missions, into space or combat. In addition to driving people around, it might be able to cook, clean, do laundry – and even keep humans company when other people aren’t nearby.

Fake news 2.0: personalized, optimized, and even harder to stop Fake news may have already influenced politics in the US, but it’s going to get a lot worse, warns an AI consultant to the CIA. Sean Gourley, founder and CEO of Primer, a company that uses software to mine data sources and automatically generate reports for the CIA and other clients, told a conference in San Francisco that the next generation of fake news would be far more sophisticated thanks to AI. “The automation of the generation of fake news is going to make it very effective,” Gourley told the audience at EmTech Digital, organized by MIT Technology Review. The warning should cause concern at Facebook. The social network has been embroiled in a scandal after failing to prevent fake news, some of it created by Russian operatives, from reaching millions of people in the months before the 2016 presidential election. More recently the company been hit by the revelation that it let Cambridge Analytica, a company tied to the Trump presidential campaign, mine users’ personal data.

Cracking the world famous Enigma Machine with artificial intelligence in just 13 minutes The work of the British codebreakers at Bletchley Park during World War II is now a famous tale of genius, perseverance and success that saved the lives of civilians and troops alike and supposedly shortened the war by as many as two years. Using mathematical and deciphering skills as well as innovative computer technology, the supposedly unbreakable Enigma code was cracked, allowing British intelligence to discover where hostile U-boats, ships and troops were heading so that Allied troop and convoy vessels could alter their routes accordingly. [Read more: Bletchley Park staff meet 78 years after war’s outbreak] The Enigma machine was so complex that its most advanced incarnation could be configured 158,962,555,217,826,360,000 different ways but had one flaw which led to its downfall - no letter could be substituted for itself. Even with this knowledge it took years many brilliant men to women months to crack the code.

How Philip K. Dick redefined what it means to be (in)human Fifty years ago, Philip K. Dick’s novel Do Androids Dream of Electric Sheep? questioned what it means to be human in ways that have an immense lasting influence. The action of the novel – and the Blade Runner films based on it – largely revolves around the central tension and struggle between biological humans and artificially constructed androids. Arguably, however, the story’s greatest continuing relevance is in the way it challenges a particular image of the human that has come to dominate in modern Western culture. Lawmakers Want You to Be Able to Sue Robots If a robot, acting autonomously, injures or otherwise wrongs a human, who will be held responsible? Some European lawmakers think that the best way to resolve this question will be to give robots “electronic personalities,” a form of legal personhood. Proposed in a 2017 report from the European Union, this form of robot rights wouldn’t give them status like that of human beings — they’re not going to get married, or buy a house, or adopt a child. But it would make it possible for self-learning robots to sue and be sued, with legal status like a corporation. Proponents say that the idea is a common-sense move, one that will be necessary to create a workable legal structure as these entities become smarter and more integrated into everyday human life. But not everyone agrees.

Will artificial intelligence become conscious? Forget about today’s modest incremental advances in artificial intelligence, such as the increasing abilities of cars to drive themselves. Waiting in the wings might be a groundbreaking development: a machine that is aware of itself and its surroundings, and that could take in and process massive amounts of data in real time. It could be sent on dangerous missions, into space or combat. DeepMind's new AI ethics unit is the company's next big move DrAfter123/iStock As we hand over more of our lives to artificial intelligence systems, keeping a firm grip on their ethical and societal impact is crucial. For DeepMind, whose stated mission is to “solve intelligence”, that task will be the work of a new initiative tackling one of the most fundamental challenges of the digital age: technology is not neutral. DeepMind Ethics & Society (DMES), a unit comprised of both full-time DeepMind employees and external fellows, is the company’s latest attempt to scrutinise the societal impacts of the technologies it creates. In development for the past 18 months, the unit is currently made up of around eight DeepMind staffers and six external, unpaid fellows. The full-time team within DeepMind will swell to around 25 people within the next 12 months.

Artificial intelligence techniques reconstruct mysteries of quantum systems The same techniques used to train self-driving cars and chess-playing computers are now helping physicists explore the complexities of the quantum world. For the first time, physicists have demonstrated that machine learning can reconstruct a quantum system based on relatively few experimental measurements. This method will allow scientists to thoroughly probe systems of particles exponentially faster than conventional, brute-force techniques. Complex systems that would require thousands of years to reconstruct with previous methods could be wholly analyzed in a matter of hours.

Boston Dynamics' Atlas Just Went For Jog In The Garden click 2x Everybody needs to get some fresh air every once in a while. Even, uh, robots. Boston Dynamics just uploaded a video of its upright, bipedal robot called Atlas going for a jog. No tethers, no awkward stiffness, just a robot, a green field, and plenty of fresh air. No stress holding it down, Atlas effortlessly crosses different types of terrain, from gentle slopes, to heavy brush — even a log can’t slow him down. With the help of a little squat, Atlas clears the log like an Olympic gymnast, going for gold.