Quantum Darwinism, which may explain our reality, passes tests.

50+ Fantastic and Innovation Ways to Reuse and Repurpose Empty Pill Bottles for the Organizer in You. Researchers make coldest quantum gas of molecules. JILA researchers have made a long-lived, record-cold gas of molecules that follow the wave patterns of quantum mechanics instead of the strictly particle nature of ordinary classical physics. 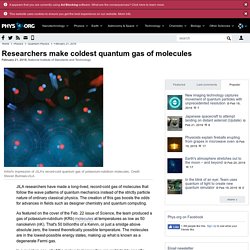 The creation of this gas boosts the odds for advances in fields such as designer chemistry and quantum computing. As featured on the cover of the Feb. 22 issue of Science, the team produced a gas of potassium-rubidium (KRb) molecules at temperatures as low as 50 nanokelvin (nK). That's 50 billionths of a Kelvin, or just a smidge above absolute zero, the lowest theoretically possible temperature. The molecules are in the lowest-possible energy states, making up what is known as a degenerate Fermi gas. Basics in Kabbalah: Hod – GalEinai – Revealing the Torah's Inner Dimension. Hod Hod is the eighth of the ten sefirot, and the fifth of the emotive attributes within Creation. 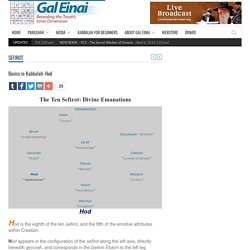 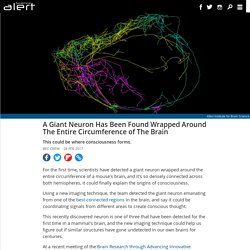 Using a new imaging technique, the team detected the giant neuron emanating from one of the best-connected regions in the brain, and say it could be coordinating signals from different areas to create conscious thought. This recently discovered neuron is one of three that have been detected for the first time in a mammal's brain, and the new imaging technique could help us figure out if similar structures have gone undetected in our own brains for centuries. You can see them highlighted in the image at the top of the page. Lead researcher Christof Koch told Sara Reardon at Nature that they've never seen neurons extend so far across both regions of the brain before. Szünidei időtöltés: makramé karkötő – FonalDesign. How to tie a Blood Knot.

Uses: The Blood Knot is a favorite knot for fly fisherman. 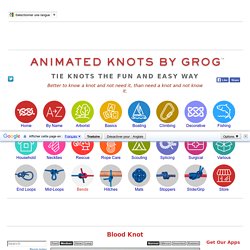 It is primarily used to join two lines of similar size, e.g., when joining sections of leader or tippet, and is one of the best knots for this purpose. The strength of the knot depends on making at least five, and up to seven, turns on each side of the center Pulling the Knot Tight: When lubricated and pulled tight, the knot changes its structure. Pulling on each line forces the wrapped turns to redistribute the twists so that the inner strand becomes an outer wrap (not illustrated in the animation using rope).

Tying it: There are several methods of tying it. New Research on Plant Intelligence May Forever Change How You Think about Plants. The Intelligent Plant. 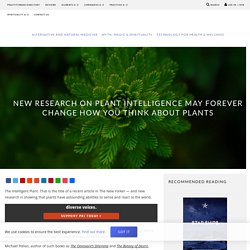 That is the title of a recent article in The New Yorker — and new research is showing that plants have astounding abilities to sense and react to the world. But can a plant be intelligent? Some plant scientists insist they are — since they can sense, learn, remember and even react in ways that would be familiar to humans. Physicists just discovered a second state of liquid water. It’s one of the most fundamental compounds on Earth, and it makes up roughly 60 percent of the human body, and yet water is turning out to be stranger than we could have ever imagined. 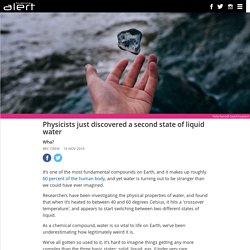 Researchers have been investigating the physical properties of water, and found that when it’s heated to between 40 and 60 degrees Celsius, it hits a 'crossover temperature', and appears to start switching between two different states of liquid. As a chemical compound, water is so vital to life on Earth, we’ve been underestimating how legitimately weird it is.

We’ve all gotten so used to it, it’s hard to imagine things getting any more complex than the three basic states: solid, liquid, gas. Johns Hopkins psychedelics research keeps finding medical uses / Boing Boing. Johns Hopkins is among several institutions challenging a key tenet of outlawing psychedelics: that they have "no medicinal use. 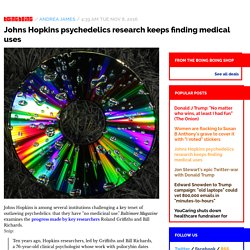 " Baltimore Magazine examines the progress made by key researchers Roland Griffiths and Bill Richards. Snip: Ten years ago, Hopkins researchers, led by Griffiths and Bill Richards, a 76-year-old clinical psychologist whose work with psilocybin dates back to the heady days of psychedelic research in the early ’60s, published their first paper on their new pilot studies.

Cited as a landmark report by former National Institute on Drug Abuse Director Charles Schuster, the ongoing research at Hopkins—and now other universities—has begun revealing a host of potentially dramatic therapeutic applications for the ancient psychedelic used by indigenous Mexican and South American communities in religious rituals for thousands of years. . • The Existential Medicine (Baltimore) Image: Jake Cook report this ad. Physicists just discovered electrons behaving like light in graphene... but better. Just when you thought graphene couldn't get any more awesome, physicists have for the first time spotted electrons in this atomically-thin material behaving like particles of light... only better. 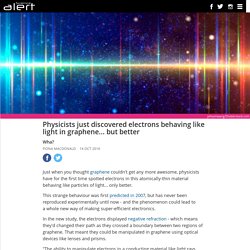 This strange behaviour was first predicted in 2007, but has never been reproduced experimentally until now - and the phenomenon could lead to a whole new way of making super-efficient electronics. In the new study, the electrons displayed negative refraction - which means they'd changed their path as they crossed a boundary between two regions of graphene. That meant they could be manipulated in graphene using optical devices like lenses and prisms. Scientists have found a bizarre similarity between human cells and neutron stars. If you were to compare yourself to a neutron star, you probably wouldn’t find very many things in common. 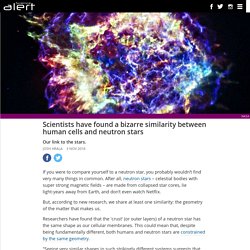 After all, neutron stars – celestial bodies with super strong magnetic fields – are made from collapsed star cores, lie light-years away from Earth, and don’t even watch Netflix. The Process Of Cosmic Self-Destruction at the Speed of Light. A theory pondered over often by scientists is whether the annihilation of the universe would be as easy as pushing a button. 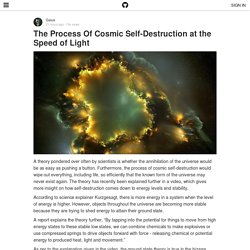 Furthermore, the process of cosmic self-destruction would wipe out everything, including life, so efficiently that the known form of the universe may never exist again. The theory has recently been explained further in a video, which gives more insight on how self-destruction comes down to energy levels and stability. According to science explainer Kurzgesagt, there is more energy in a system when the level of energy is higher. However, objects throughout the universe are becoming more stable because they are trying to shed energy to attain their ground state.

Why We Cry: The Science of Sobbing and Emotional Tearing. This Interview With Nikola Tesla From 1899 Reveals His Extraordinary Personality. Quantum Consciousness: Empathy And Entanglement. It is fair to say that our global civilization now finds itself at a critical crossroads of development, in terms of natural resources, material systems, and modes of thinking — a physical and psychical criticality. Relativity and anti relativity. Quantum Theory. Biology. Experiment opens the door to multi-party quantum communication.

In the world of quantum science, Alice and Bob have been talking to one another for years. Charlie joined the conversation a few years ago, but now with spacelike separation, scientists have measured that their communication occurs faster than the speed of light. For the first time, physicists at the Institute for Quantum Computing (IQC) at the University of Waterloo have demonstrated the distribution of three entangled photons at three different locations (Alice, Bob and Charlie) several hundreds of metres apart, proving quantum nonlocality for more than two entangled photons.

The findings of the experiment, Experimental Three-Particle Quantum Nonlocality under Strict Locality Conditions, are published in Nature Photonics today. Once described by Einstein as "spooky action at a distance," this three-photon entanglement leads to interesting possibilities for multi-party quantum communication.

They suggest that EEG rhythms (brain waves) also derive from deeper level microtubule vibrations, and that from a practical standpoint, treating brain microtubule vibrations could benefit a host of mental, neurological, and cognitive conditions. Microtubules are major components of the structural skeleton of cells. Dark Matter Reveals the Structure of the Universe. CGear Sand-Free Multi Rug.

Neuro. Growing New Neurons. Brain cells called pericytes can be reprogrammed into neurons with just two proteins, pointing to a novel way to treat neurodegenerative disorders. Pericytes, Image courtesy of M. Karow et al., 2012Making new neurons in the brain may not be as hard as once believed. Using just two proteins and without any cell divisions, scientists from Ludwig-Maximilians University Munich succeeded in reprogramming brain cells known as pericytes into neurons in both cultured cells from humans and mice. The findings, published today (October 4) in Cell Stem Cell, could have implications for patients with degenerative brain disorders. Science animals.

Movies. Graphic Designer Dad Illustrates His Kids’ Lunch Bags Almost Every Day Since 2008. Graphic designer and competitor for Best Dad Ever David LaFerriere has been drawing illustrations on his children’s sandwich bags since 2008. Facebook. Nuclear Mysticism: Salvador Dali. Once called Nuclear Mysticism, Quantum mysticism is a philosophical interpretation of Quantum mechanics, used as a means to explain the phenomena of consciousness, seeking to explain actual versus perceived reality. Denounced by Einstein, Quantum Mysticism is more of idea that lacks true scientific substance.[6] “As the famous Copenhagen interpretation of quantum mechanics argues, we cannot speak about an objective reality other than that which is revealed through measurement and observation.”[6] If something is true in reality it can be replicated through tests, and experimentation, unlike quantum mysticism, which is overly subjective.