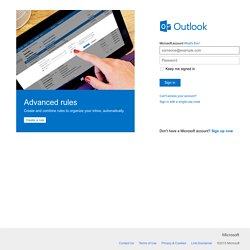 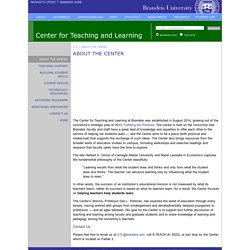 The Center is built on the conviction that Brandeis faculty and staff have a great deal of knowledge and expertise to offer each other in the service of helping our students learn — and the Center aims to be a place (both physical and intellectual) that supports the exchange of such ideas. The Center also brings resources from the broader world of education studies to campus, including workshops and selected readings and research that faculty rarely have the time to explore.

Humanising Language Teaching Magazine for teachers and teacher trainers. Year 17; Issue 3June 2015 You can copy this entire edition to your computer and read it when you want. 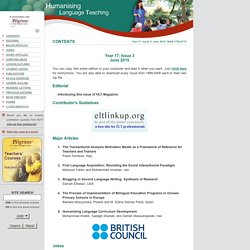 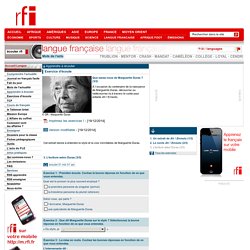 Ernesto. Cet extrait donne à entendre le style et la voix inimitables de Marguerite Duras. Exercices proposés par Isabelle Cros. Free Online Meditation Course. Consejos para lograr la felicidad. Ds4oer.oeru. Word on the Street. Accents and dialects of the UK. Transcript for London (RP) Michelle: Uh, I guess the first time I, kind of, went abroad really by myself was straight after ‘A’ Levels and I went to Paris, so that was the summer of ninety-one and I stayed two-and-a-half months in Paris and lived in a little studio with my friend and tried to get work. 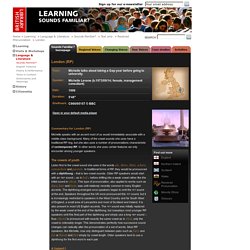 Eliane: Why did you decide to go away? Michelle: That was kind of random. I hadn’t fixed anything up for that summer and this friend of mine had this studio apartment at very low rent and I thought, “Well, what the heck? Got a summer free; go and learn French; go and see what happens!” Eliane: And were your friends travelling at that time? Michelle: Uhm, yeah, I think so. Eliane: And why did you decide to go away in your Gap2 year? Eliane: What was it like being away for that long? Eliane: And what is the attraction of travelling for you? Eliane: Do you think there’s such a thing as a global village? Michelle: I don’t even know what that expression means. [laughter] A tour of the British Isles in accents. Order of adjectives. Sometimes we use more than one adjective in front of a noun: He was a nice intelligent young man. 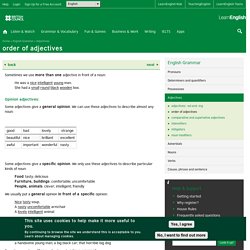 She had a small round black wooden box. Opinion adjectives: Some adjectives give a general opinion. We can use these adjectives to describe almost any noun: Some adjectives give a specific opinion. Food: tasty; deliciousFurniture, buildings: comfortable; uncomfortablePeople, animals: clever; intelligent; friendly. EXPLORING ENGLISH: language and culture. Relative pronouns - English Grammar Today. Who or whom - Common confusions - Knowledge of Language. Who Use 'who' if it is about something which could be indicated by the pronouns: Iheshewethey To check, ask a question to see if one of these pronouns is in the answer. 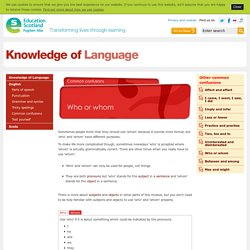 Who is going to the party? We are going to the party. 'We' is the subject of the sentence. Who was arrested? 'He' is the subject of the sentence. More complicated examples James is the person who won the competition. To check if 'who' is correct, ask the question 'Who won the competition? ' The answer is, 'He did'. Oxford Dictionaries - Dictionary, Thesaurus, & Grammar. Malapropisms > Mondegreens. BORED? 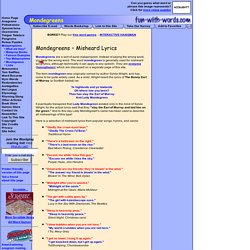 Play our free word games – INTERACTIVE HANGMAN Mondegreens are a sort of aural malapropism. Instead of saying the wrong word, you hear the wrong word. The word mondegreen is generally used for misheard song lyrics, although technically it can apply to any speech. They are oronyms (homophones) which are discussed on a separate page of this site. The term mondegreen was originally coined by author Sylvia Wright, and has come to be quite widely used.

Ye highlands and ye lowlands Oh where hae you been? It eventually transpired that Lady Mondegreen existed only in the mind of Sylvia Wright, for the actual lyrics said that they "slay the Earl of Murray and laid him on the green. "