How to compost human waste. An outdoor compost toilet When I spent two weeks living in an ecovillage last summer, I proudly talked to friends and family about the fact that I hadn’t flushed a toilet in two weeks. 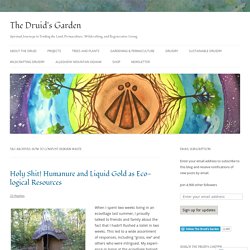 This led to a wide assortment of responses, including “gross, ew” and others who were intrigued. My experience in living at the ecovillage helped better align me with my own waste streams. Each time I made any kind of deposit in the composting system at the ecovillage, I knew the waste my body no longer needed wasn’t going into some toxic sewage plant, but rather, back into the living landscape. And for that, I was grateful—I felt realigned with the land in a new and exciting way. Convert Human Waste into Safe Garden Compost Fertilizer 4pp. Composting Human Waste from Denali with Worms. Intent on using a pitchfork to break open 2-gallon (8-liter) bags of human waste, the man wore a respirator to quell the stench. 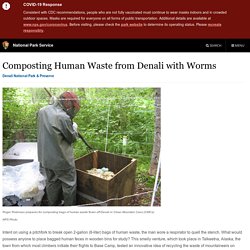 What would possess anyone to place bagged human feces in wooden bins for study? This smelly venture, which took place in Talkeetna, Alaska, the town from which most climbers initiate their flights to Base Camp, tested an innovative idea of recycling the waste of mountaineers on Denali. Each year, the ~1,200 climbers attempting to summit Denali generate about 7,500 pounds (3,400 kg) of solid human waste. Compost human waste safely. Composting human waste is easy. How to Compost Human Waste Composted Human Waste is excellent fertilizer for non-edible plants. 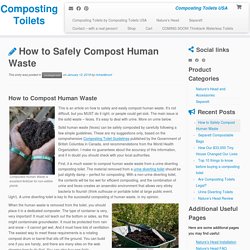 This is an article on how to safely and easily compost human waste. It’s not difficult, but you MUST do it right, or people could get sick. The main issue is the solid waste – feces. It’s easy to deal with urine. Humanure: the end of sewage as we know it? Laura Allen, a 33-year-old teacher from Oakland, California, has a famous toilet. 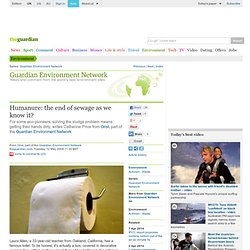 To be honest, it's actually a box, covered in decorative ceramic tiles, sitting on the cement floor of her bathroom like a throne. No pipes lead to or from it; instead, a bucket full of shavings from a local wood shop rests on the box next to the seat with a note instructing users to add a scoopful after making their "deposit. " Essentially an indoor outhouse, it's a composting toilet, a sewerless system that Allen uses to collect her household's excrement and transform it into a rich brown material known to fans as "humanure.

" Allen is a founding member of an activist group devoted to the end of sewage as we know it. From toilet to table, overcoming the ‘yuk’ factor. Nature is calling: Here's how to poop properly in the great outdoors. The very first time Matt Misicka went camping in the backcountry, he really stepped in it. 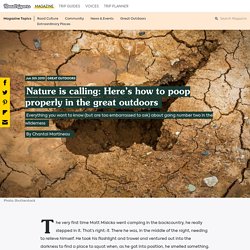 That’s right: it. There he was, in the middle of the night, needing to relieve himself. He took his flashlight and trowel and ventured out into the darkness to find a place to squat when, as he got into position, he smelled something. Principle 3: Dispose of Waste Properly - Leave No Trace Center. Cat Holes Cat holes are the most widely accepted method of waste disposal. 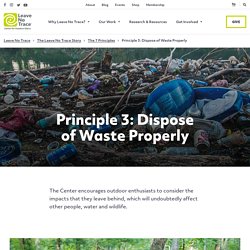 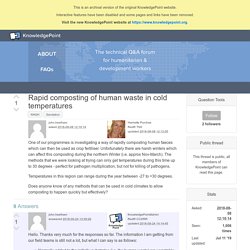 The reduction in volume of the waste, the reduction in the “yuk” factor and the reduction in health risk. One problem is when the waste looks composted but still has hidden dangers - often due to eggs rather than bacteria. Human faeces as a resource in agriculture. Microelement Variability in Plants as an Effect of Sewage Sludge Compost Application Assessed by Different Statistical Methods. 1. 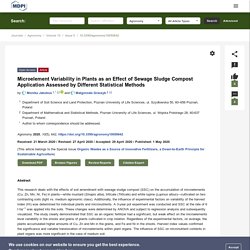 Introduction When considering proper plant nutrition generally, first of all, the macronutrient requirements need to be satisfied. However, current sustainable farming management recommendations also indicate micronutrient application needs. Micronutrients, for many years, have been considered as less essential in plant nutrition. Presently, it is well documented that micronutrients play an important role in increasing both the quantity and quality of crop yield through their involvement in the metabolism of N, P, K, Ca, Mg and S, as well as crop responses to environmental stress conditions [1]. 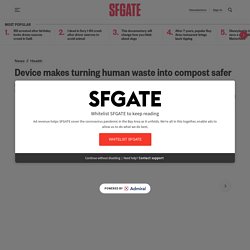 Andersen has invented a device that tracks the decomposition of compost made of human feces, a function that he says could help improve environmental health all over the world. In earthquake-ravaged Haiti, the technology is being used to monitor sanitary waste in an effort to accelerate the production of disease-free, nutrient-rich compost for agriculture and reforestation. Soon, in a small pilot project in Bolinas, the technology will help make compost out of waste from special toilets that will use less water and possibly ease perpetual water shortages. The study of decomposing waste is useful, Andersen insists - and not as icky as it sounds. The Humanure Handbook - Center of the Humanure Universe. 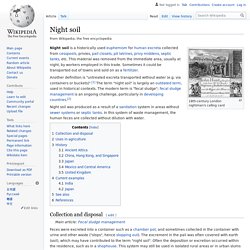 This material was removed from the immediate area, usually at night, by workers employed in this trade. Sometimes it could be transported out of towns and sold on as a fertilizer. RE:View. Human Manure Better than Cow Manure as Fertilizer for Organic Gardening. Make Garden Compost out of your waste - Recycle your Most Plentiful Organic Resource. SOIL Haiti‏‏‎ ‎- SOIL Haiti‏‏‎ ‎ Pay Up. Vermicomposting of source-separated human faeces by Eisenia fetida: Effect of stocking density on feed consumption rate, growth characteristics and vermicompost production. Composting Toilets. Anaeorobic Digestion AD and BioGas.