Ted happy/happiness. Lesley Hazleton: The doubt essential to faith. The men of the Fifth World (full documentary) Spiritualcaremattersfinal. Spirituality correlates to better mental health regardless of religion, say researchers. Despite differences in rituals and beliefs among the world's major religions, spirituality often enhances health regardless of a person's faith, according to University of Missouri researchers. 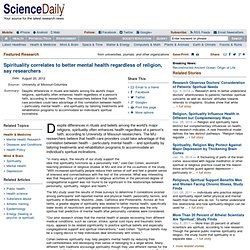 The MU researchers believe that health care providers could take advantage of this correlation between health -- particularly mental health -- and spirituality by tailoring treatments and rehabilitation programs to accommodate an individual's spiritual inclinations. "In many ways, the results of our study support the idea that spirituality functions as a personality trait," said Dan Cohen, assistant teaching professor of religious studies at MU and one of the co-authors of the study. Spirituality, religion may protect against major depression by thickening brain cortex.

A thickening of the brain cortex associated with regular meditation or other spiritual or religious practice could be the reason those activities guard against depression -- particularly in people who are predisposed to the disease, according to new research led by Lisa Miller, professor and director of Clinical Psychology and director of the Spirituality Mind Body Institute at Teachers College, Columbia University. 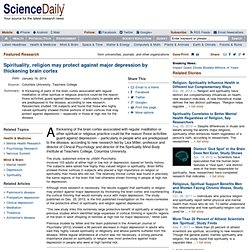 The study, published online by JAMA Psychiatry, involved 103 adults at either high or low risk of depression, based on family history. The subjects were asked how highly they valued religion or spirituality. Brain MRIs showed thicker cortices in subjects who placed a high importance on religion or spirituality than those who did not. The relatively thicker cortex was found in precisely the same regions of the brain that had otherwise shown thinning in people at high risk for depression. Spirituality. Spirituality can play an important role in helping people maintain good mental health and live with or recover from mental health problems. 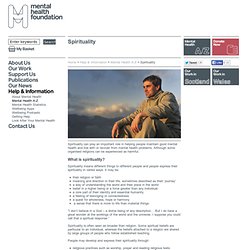 Although some organised religions can be experienced as harmful. What is spirituality? Spirituality means different things to different people and people express their spirituality in varied ways. It may be: their religion or faith meaning and direction in their life, sometimes described as their ‘journey’ a way of understanding the world and their place in the world belief in a higher being or a force greater than any individual a core part of their identity and essential humanity a feeling of belonging or connectedness a quest for wholeness, hope or harmony a sense that there is more to life than material things. “I don’t believe in a God – a divine being of any description… But I do have a great wonder at the workings of the world and the universe. Spirituality is often seen as broader than religion. Spirituality and Mental Health. Introduction Spirituality and psychiatry - on the face of it, they do not seem to have much in common. 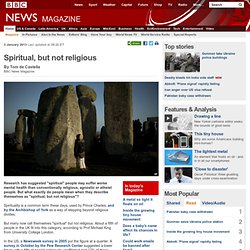 But what exactly do people mean when they describe themselves as "spiritual, but not religious"? Spirituality is a common term these days, used by Prince Charles, and by the Archbishop of York as a way of stepping beyond religious divides. But many now call themselves "spiritual" but not religious. About a fifth of people in the UK fit into this category, according to Prof Michael King from University College London. In the US, a Newsweek survey in 2005 put the figure at a quarter. King's research suggested that in the UK the "spiritual" group are more likely to have mental health problems, such as anxiety or depression. Continue reading the main story Spiritual bestsellers It's a broad church, so to speak. But for millions of others it is nothing so esoteric.

The Maharishi. The Psychology of Spirituality. Christmas is once more upon us, celebrating the birth of Jesus Christ. 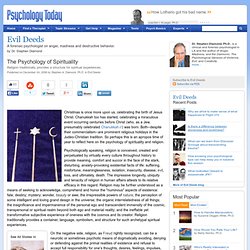 Chanukkah too has started, celebrating a miraculous event occurring centuries before Christ (who, as a Jew, presumably celebrated Chanukkah) was born. Both--despite their commercialism--are prominent religious holidays in the Judeo-Christian tradition. So perhaps this is an apropos time of year to reflect here on the psychology of spirituality and religion. Psychologically speaking, religion is conceived, created and perpetuated by virtually every culture throughout history to provide meaning, comfort and succor in the face of the stark, disturbing, anxiety-provoking existential facts of life: suffering, misfortune, meaninglessness, isolation, insecurity, disease, evil, loss, and ultimately, death.

The impressive longevity, ubiquity and tenacity of religion in human affairs attests to its relative efficacy in this regard. Explore. Spiritual Abuse by Etienne Bachmann on Prezi.