Kristallnacht. Intro This front page of the Daily Express from 1938, reports a violent pogrom in Nazi Germany, known as 'Kristallnacht' (night of broken glass). In a single night, at least 91 Jews were killed, approximately 30,000 were arrested and sent to concentration camps, and thousands of Jewish homes, businesses and synagogues were attacked. 1938 – “The Fateful Year” The events of 1938, which a German document termed “The Fateful Year,” were part of the radicalization of the Nazis’ Jewish policy. 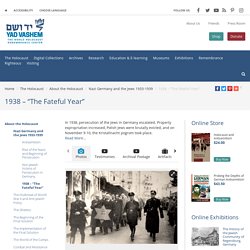 During this year German expansionism escalated, and domestic preparations for war accelerated. The Kristallnacht Pogrom, 9-10 November 1938 - It Came From Within. That was the heart of the problem of German Jewry: It was so much a part of German society that the Nazi blow hit it from within. 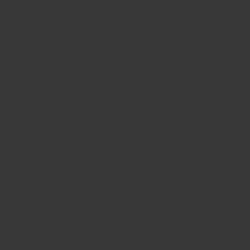 Until 1938 my parents never thought of leaving Germany. "There's no way the Germans we live with will continue to do these things. It's only an episode. " Search results for 'kristallnacht' - Digitised newspapers and more. Kristallnacht. Intro This front page of the Daily Express from 1938, reports a violent pogrom in Nazi Germany, known as 'Kristallnacht' (night of broken glass). 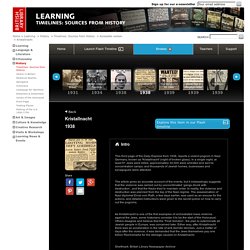 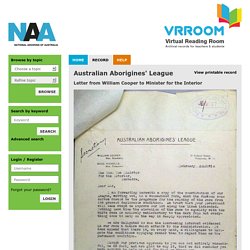 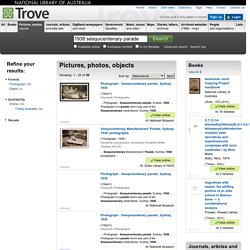 National Museum of Australia. Australian Aborigines’ League In 1933 at 72 years of age, Cooper moved to Melbourne because as a resident on the reserve he was ineligible for the old-age pension. 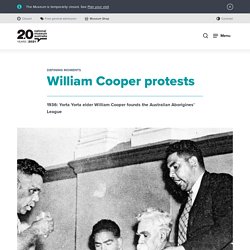 He made his home in Footscray which became the centre for other Cummeragunja exiles such as Margaret Tucker, Shadrach James and his grand-nephew, Doug Nicholls. This group formed the nucleus of the Australian Aborigines’ League (AAL), which was constituted in 1936, although Cooper has made representations to government on behalf of an informal group of the same name for some years prior to that. The Australian Aborigines’ League was created to lobby state and federal governments on behalf of Aboriginal people. Since September 1933 Cooper had been gathering signatures for a petition to the King asking for, among other things, Aboriginal representation in federal parliament. 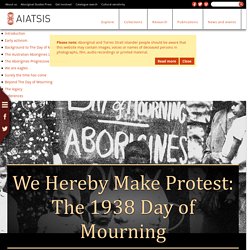 A series of events and activities had been organised to mark the sesquicentenary anniversary. For those who celebrated there was a parade, a sailing regatta and a lawn bowls tournament. One of the feature events of the day was a re-enactment of the arrival of the First Fleet. A group of Aboriginal men from Menindee, in far-west New South Wales, were brought to Sydney to act in the role of the original Eora peoples of Port Jackson. Those who mourned and had little reason to celebrate were kept waiting until the parade passed by. With the sesquicentenary parade delaying the marchers for so long, the meeting did not start until 1.30 pm. Jack Patten chaired the meeting. Some of the other people attending the conference were Margaret Tucker, Selina Patten (Jack’s wife), Pearl Gibbs, Jack Johnson, Mrs F.

Only four non-aboriginal people were allowed, two policemen as well as Russell Clark from Man magazine and P R Stephensen. Mr. William Cooper: a Koorie's protest against the Nazis. On 6 December 1938 —almost 80 years ago— during a warm summer evening in Melbourne one man led a protest in an attempt to protect a discriminated against, marginalised peoples on the other side of the world. 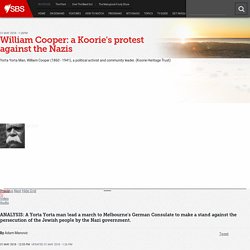 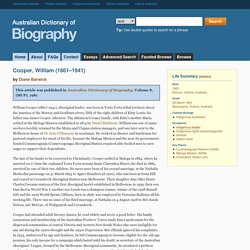 -1941), Aboriginal leader, was born in Yorta Yorta tribal territory about the junction of the Murray and Goulburn rivers, fifth of the eight children of Kitty Lewis; his father was James Cooper, labourer. The Atkinson/Cooper family, with Kitty's mother Maria, settled at the Mologa Mission established in 1874 by Daniel Matthews. William was one of many workers forcibly retained by the Moira and Ulupna station managers, and was later sent to the Melbourne home of Sir John O'Shanassy as coachman. He worked as shearer and handyman for pastoral employers for much of his life, because the Maloga Mission and the near-by government-funded Cummeragunja (Cumeroogunga) Aboriginal Station required able-bodied men to earn wages to support their dependents.

Legislations The state and territory government legislation on this website was originally compiled for the Bringing Them Home Report in documenting "the strength and struggles of many thousands of Aboriginal and Torres Strait Islander people affected by forcible removal"¹. 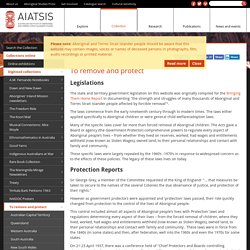 The laws commence from the early nineteenth century through to modern times. The laws either applied specifically to Aboriginal children or were general child welfare/adoption laws. Many of the specific laws cover far more than forced removal of Aboriginal children. The Acts gave a Board or agency (the Government Protector) comprehensive powers to regulate every aspect of Aboriginal people’s lives – from whether they lived on reserves, worked, had wages and entitlements withheld (now known as Stolen Wages), owned land, to their personal relationships and contact with family and community.

Protection Reports More states will be added as they are digitised. Report / Maloga Aboriginal Mission School.