Tahnee Passmore, Author at The Kangaroo Sanctuary. Alice Springs is Australia’s best kept secret Conde Nast Traveller says “no trip to Alice Springs is complete without saying hello to Brolga and his merry troupe of orphan kangaroos” Click here for story Visit our Kangaroos A lovely advertisement by Qantas Airways. 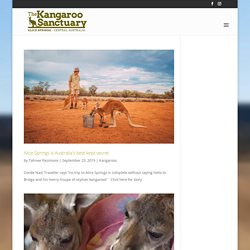 Come visit all of us at our Kangaroo Sanctuary Start your adventure to Alice Springs today Feed and cuddle rescued joeys at this kangaroo sanctuary in the Northern Territory – Australia's Outback ♥ Book... Kangaroo Dundee – A Tour with Brolga + Joey Cuddling at The Kangaroo Sanctuary in Alice Springs A lovely article by Blue Eyed View. How Brolga became a Kangaroo Mum – Conversations ABC Radio It was a great pleasure to be on our favourite radio program ‘Conversations’ on ABC radio. Starstruck! A lovely blog by Robyn Hayes who visited on our guided sunset tour Starstruck! Three crazy camels and a wombat Check out this great little clip from Kangaroo Dundee series 3 of our crazy camels and wombat We have power! Exciting news! Tahnee Passmore, Author at The Kangaroo Sanctuary. 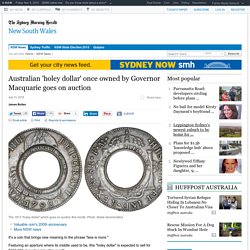 Photo: Noble Numismatics It's a coin that brings new meaning to the phrase "less is more. " Featuring an aperture where its middle used to be, this "holey dollar" is expected to sell for $350,000 at auction later this month. Making its public auction debut, the 1813 coin once belonged to one of NSW's first governors, Lachlan Macquarie, and is valued so highly because of its fine condition, historical value and rarity.

Only 300 holey dollars exist worldwide, with half of those residing in public collections. "It's a coin we've been waiting to handle on the market for some time. He said the coin could attract a number of interested parties, given its value and significance. "It could be a museum, it could be a private collector. In 2012, a holey dollar sold for $410,000 at auction – and was later stolen from the State Library of NSW. Governor Macquarie gave this particular coin to an associate as a gift. Curator's notes Rabbit-Proof Fence (2002) on ASO. Rabbit-Proof Fence is more than a significant film in the history of Australian cinema; it’s a significant landmark in the ongoing process of reconciliation between black and white Australians. 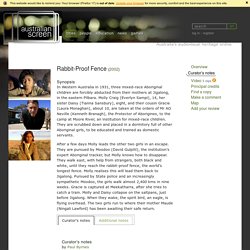 For many white Australians, it was the first direct emotional experience of what it meant to be a 'stolen child’, and part of the 'stolen generations’. That identification with a history that was already contested made the film controversial. It was a popular success at the box-office, one of only a very few films concerning Aboriginal life that has ever been popular, but it remains very unpopular with some conservative politicians and commentators. In 2002 when the film came out, there were some criticisms of the film as being too soft, and too sympathetic to the character of AO Neville. Others claimed he had been defamed. What’s less controversial is the fact that it’s an extraordinary piece of storytelling by Phillip Noyce and his team. ESL Sites. DustEchoes-BatButterfly-StudyGuide. DustEchoes-MorningStar-StudyGuide.

DustEchoes-Introduction-StudyGuide. Bennelong the Wangal - Discovery. Living Black: S18 Ep9 - Bennelong. The Song of Bennelong and Pemulwuy. IELTS for Australia. IELTS is the best choice of test for students, migrants and workers coming to Australia. 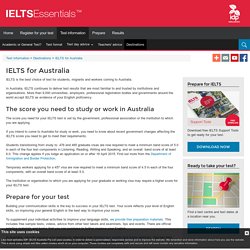 In Australia, IELTS continues to deliver test results that are most familiar to and trusted by institutions and organisations. More than 9,000 universities, employers, professional registration bodies and governments around the world accept IELTS as evidence of your English proficiency. The score you need to study or work in Australia The score you need for your IELTS test is set by the government, professional association or the institution to which you are applying. If you intend to come to Australia for study or work, you need to know about recent government changes affecting the IELTS score you need to get to meet their requirements. Students transitioning from study to 476 and 485 graduate visas are now required to meet a minimum band score of 5.0 in each of the four test components in Listening, Reading, Writing and Speaking, and an overall band score of at least 6.0. Prepare for your test.