Killer Controversy: Why orcas should no longer be kept in captivity. Changes in dive behavior during naval sonar exposure in killer whales, long-finned pilot whales, and sperm whales. Introduction Our understanding of the effects of military sonars on marine mammals has increased in the past decades (Richardson et al., 1995; Nowacek et al., 2007), but large gaps of knowledge still exist (Nowacek et al., 2007). 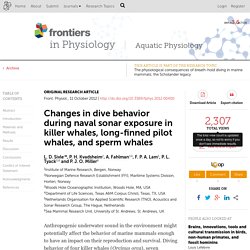 Attention has focused on beaked whales due to several stranding events coinciding in time and space with military sonar operations (e.g., Simmonds and Lopez-jurado, 1991; Frantzis, 1998; Jepson et al., 2003; Cox et al., 2006; D'Amico et al., 2009). It has been suggested that these strandings are associated with a change in dive behavior which leads to development of tissue nitrogen gas bubbles and symptoms related to decompression sickness (DCS) (Jepson et al., 2003).

In this paper, we investigate whether and how whales changed their diving behavior during exposures to naval sonar sounds. Materials and Methods Data were collected during three field periods; November 2006, May/June 2008 and May/June 2009, in the Northern Norwegian Sea. An Error Occurred Setting Your User Cookie. This site uses cookies to improve performance. 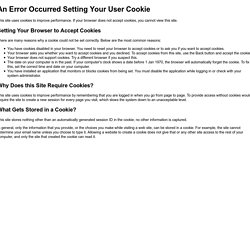 If your browser does not accept cookies, you cannot view this site. Setting Your Browser to Accept Cookies There are many reasons why a cookie could not be set correctly. Below are the most common reasons: You have cookies disabled in your browser. Why Does this Site Require Cookies? This site uses cookies to improve performance by remembering that you are logged in when you go from page to page. What Gets Stored in a Cookie? This site stores nothing other than an automatically generated session ID in the cookie; no other information is captured. In general, only the information that you provide, or the choices you make while visiting a web site, can be stored in a cookie. Detailed Discussion of Laws Concerning Orcas in Captivity. Whales have been in captivity since 1861 when P.T. 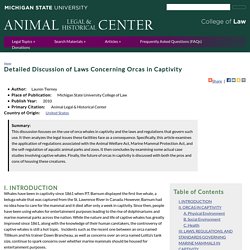 Barnum displayed the first live whale, a beluga whale that was captured from the St. Lawrence River in Canada. However, Barnum had no idea how to care for the mammal and it died after only a week in captivity. Since then, people have been using whales for entertainment purposes leading to the rise of dolphinariums and marine mammal parks across the nation. While the nature and life of captive whales has greatly improved since 1861, along with the knowledge of their human caretakers, the controversy of captive whales is still a hot topic.

Despite public concern, federal regulations that deal with the housing of marine mammals are often not well-enforced. Awesome Orcas - Keep It Wild! A Grade 4 Workshop on Habitats and Food Chains Orcas in the Wild Orcas, or killer whales, are marine mammals that are found in all the oceans of the world, especially the freezing waters of the polar regions. 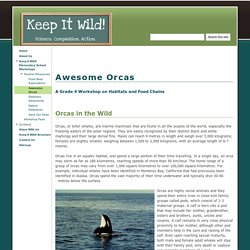 They are easily recognized by their distinct black and white markings and their large dorsal fins. Males can reach 9 metres in length and weigh over 5,000 kilograms; females are slightly smaller, weighing between 1,500 to 3,500 kilograms, with an average length of 6-7 metres. Orcas live in an aquatic habitat, and spend a large portion of their time travelling. Orcas are highly social animals and they spend their entire lives in close-knit family groups called pods, which consist of 1-3 maternal groups. The diet of an orca whale is often geographically or population specific. Aside from clicks for echolocation, orcas also make a variety of calls that resemble high-pitched squawks, whistles and squeals.

Orcas have no natural predators, and are not routinely hunted by humans. Space. Welcome to Orca Network - Orca Lifespans. How long do orcas live? 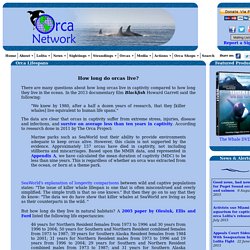 There are many questions about how long orcas live in captivity compared to how long they live in the ocean. In the 2013 documentary film Blackfish Howard Garrett said the following: "We knew by 1980, after a half a dozen years of research, that they [killer whales] live equivalent to human life spans. " The data are clear that orcas in captivity suffer from extreme stress, injuries, disease and infections, and survive on average less than ten years in captivity. According to research done in 2011 by The Orca Project: Marine parks such as SeaWorld tout their ability to provide environments adequate to keep orcas alive. SeaWorld's explanation of longevity comparisons between wild and captive populations states: "The issue of killer whale lifespan is one that is often misconstrued and overly simplified.

Animal Welfare Institute. Orca captivity facts - WDC, Whale and Dolphin Conservation. Killer whales, more properly known as orcas, have been kept in captivity since 1961, helpless victims of a blatantly commercial experiment which has seen dozens of wild orcas plucked from their families and forced to live in artificial social groupings which bear scant resemblance to their natural order. 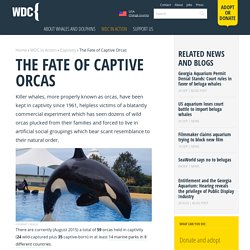