8 Tips for Mastering a More Paperless Life with Evernote. Even in the digital age, paper is still very much a modern reality. 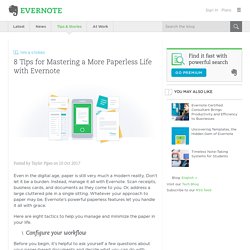 Preserving Team Knowledge in the Gig Economy. Do you remember your parents or grandparents staying in the same job for their entire lives? 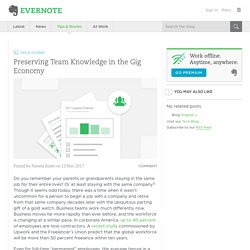 Or at least staying with the same company? Though it seems odd today, there was a time when it wasn’t uncommon for a person to begin a job with a company and retire from that same company decades later with the ubiquitous parting gift of a gold watch. Business teams work much differently now. Business moves far more rapidly than ever before, and the workforce is changing at a similar pace.

In corporate America, up to 40 percent of employees are now contractors. Even for full-time “permanent” employees, the average tenure in a single company dropped to 4.2 years in 2016. What shared memory means to business teams It doesn’t matter how big your business is. Uncovering Templates, the Hidden Gem of Evernote. One of the advantages of Evernote is flexibility. 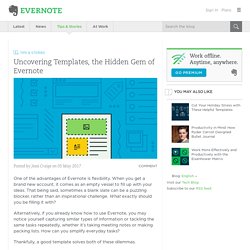 When you get a brand new account, it comes as an empty vessel to fill up with your ideas. That being said, sometimes a blank slate can be a puzzling blocker, rather than an inspirational challenge. What exactly should you be filling it with? Alternatively, if you already know how to use Evernote, you may notice yourself capturing similar types of information or tackling the same tasks repeatedly, whether it’s taking meeting notes or making packing lists. How to Play Your Career by the New Rules of Work: Tips and Templates from The Muse.

With the sheer pace of change and introduction of new devices and apps, it’s hard to deny that a lot has changed at the office. 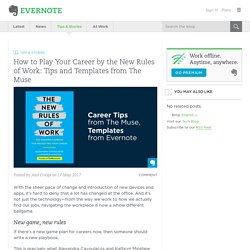 And it’s not just the technology—from the way we work to how we actually find our jobs, navigating the workplace is now a whole different ballgame. New game, new rules If there’s a new game plan for careers now, then someone should write a new playbook. This is precisely what Alexandra Cavoulacos and Kathryn Minshew were thinking when they founded TheMuse.com, a career website that’s especially popular among millennials. Learning From The Feynman Technique. They called Feynman the “Great Explainer.” 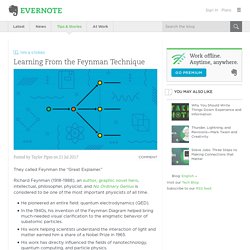 Richard Feynman (1918-1988), an author, graphic novel hero, intellectual, philosopher, physicist, and No Ordinary Genius is considered to be one of the most important physicists of all time. He pioneered an entire field: quantum electrodynamics (QED).In the 1940s, his invention of the Feynman Diagram helped bring much-needed visual clarification to the enigmatic behavior of subatomic particles.His work helping scientists understand the interaction of light and matter earned him a share of a Nobel Prize in 1965.His work has directly influenced the fields of nanotechnology, quantum computing, and particle physics.

Evernote: The Engine of Productivity for Freelancers. Flexibility. 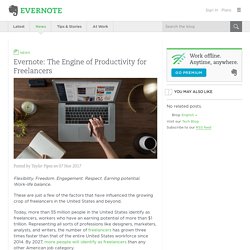 Freedom. Engagement. Respect. Earning potential. Work-life balance. These are just a few of the factors that have influenced the growing crop of freelancers in the United States and beyond. Today, more than 55 million people in the United States identify as freelancers, workers who have an earning potential of more than $1 trillion. Podcast: Tiago Forte's Approach to Productivity. The Taking Note podcast is back and moving from a monthly to a bi-weekly schedule! 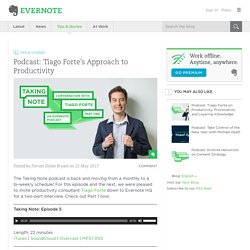 For this episode and the next, we were pleased to invite productivity consultant Tiago Forte down to Evernote HQ for a two-part interview. Check out Part 1 now: Taking Note: Episode 5 Length: 22 minutesiTunes | SoundCloud | Overcast | MP3 | RSS You may recognize Tiago’s name from his guest posts for the Evernote blog, in which he’s argued for a brain-based approach to creative workflows and changing the productivity curve of our work days.

Highlights of our conversation are transcribed below. Knowledge Management.

Note Links. Command & Control: Essential Evernote Shortcuts. Workflow. How I Use Evernote as a Spark File. How Evernote can Help you Achieve Your Goals in 2015. If you are going to achieve your goals in 2015, you must have a way to track your progress, so you actually achieve it. 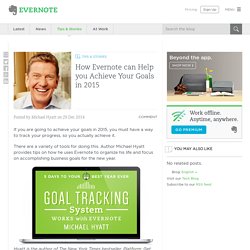 There are a variety of tools for doing this. Author Michael Hyatt provides tips on how he uses Evernote to organize his life and focus on accomplishing business goals for the new year. Hyatt is the author of The New York Times bestseller, Platform: Get Noticed in a Noisy World. He is also the founder of Platform University and the massively popular course, 5 Days to Your Best Year Ever. Like millions of other people, I use Evernote as my “digital brain” to store ideas, notes, web clips, receipts, recipes, important documents, event details, and more. Manage New Year's Resolutions With Evernote. As many of us reflect on the accomplishments of the past year, we thought we’d share a few of our tips for using Evernote to accomplish all your professional goals in 2015. 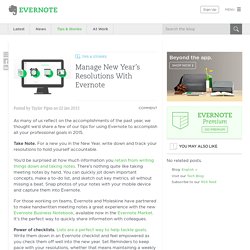 Take Note. For a new you in the New Year, write down and track your resolutions to hold yourself accountable. You’d be surprised at how much information you retain from writing things down and taking notes. There’s nothing quite like taking meeting notes by hand.